Lobsta Bakes of Maine started 25 years ago with a love story when a Maine lobster fisherman met and married a vacationer from Cincinnati.

“We have been bringing in live lobster from Maine and steaming them on your doorstep ever since the wedding,” said Jim Radcliffe, catering sales manager for Lobsta Bakes.

“We bring it all and use our custom-built steam cookers on-site to prepare the freshest lobster, delivered to us the day after catch, and served up with corn, potatoes, coleslaw, mussels, breads and drawn butter,” Radcliffe said. “We have seafood appetizers that go well with the Lobsta Bakes that include crab cakes, shrimp cocktail, clam chowder, and oysters on the half shell.”

Radcliffe said staff will stay on-site this year and serve. In the past, a caterer handled the serving.

“We will give lobster-picking demonstrations and go tableside to assist anyone that may want additional help,” he said.

However, Radcliffe said the Lobster Palooza crowd typically doesn’t need much instruction.
“We do about 50 to 70 Lobsta Bakes in a normal summer and typically travel within a 150-mile radius from the shop,” Radcliffe said.

Smith sold the company to Phil and Emma Jones earlier this year.

“Kevin is up in Maine with his wife Ann making sure we always have lobsters,” Radcliffe said. “He is back up working lobster boats. He’ll be making guest appearances (for Lobsta Bakes).” 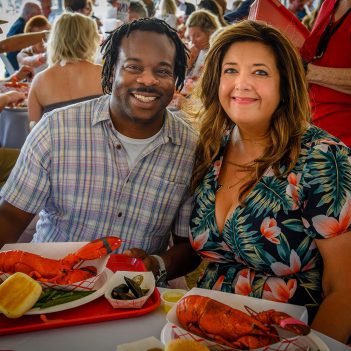 Ellinger Riggs Insurance, based in Noblesville, is in its fourth year as a sponsor of the event. Rob Ellinger, a Fishers resident, is the president of the agency.

“We think supporting the arts is important,” Ellinger said. “We think it’s great for us to be involved in. This shows a different side of opera. A lot of people think of opera as a black-tie (event). This is a more casual event, and how often do we get fresh lobster in Indiana, right? It’s a fun event and a great atmosphere.”
Other event sponsors include Daniel’s Vineyard, Current Publishing, National Bank of Indianapolis and Merrill: J.K. Blackburn & Associates/Searles Akers Wealth Management Group.

This is the second year the event will be held at Daniel’s Vineyard. It was previously held outside of the Basile Opera Center in Indianapolis.

“We love connecting with the beautiful location of Daniel’s and the Geist (Reservoir) area,” said Indy Opera General Director David Starkey, who lives in McCordsville. “This uniqueness of having a lobster bake is not your typical thing you have in Indiana. It’s top shelf all the way. It’s a party. It’s bringing new and unique things together. The opera is all about bringing new and different things together.”

A cocktail hour is set for 5 to 6 p.m., followed by the lobster dinner from 6 to 7 p.m. Besides Daniel’s wines, Taxman Brewery, Tito’s Vodka and Still Moon specialty drinks also will be available. From 7 to 9 p.m., the Drew Martini band will perform music for dancing.

Tickets are $200. The deadline for ticket orders is July 8. For more, visit indyopera.org.