Fishers residents Geoff Tease and Brian Butler spend a lot of time thinking about cell towers, specifically the smaller ones sprouting up all over their city.

The “fifth generation” of cellular networks, also known as 5G, has arrived. Although it has the capability to increase internet speed, connect to a multitude of devices and support newer technologies like self-driving vehicles, Tease and Butler aren’t satisfied with how the rollout has taken place in Fishers. 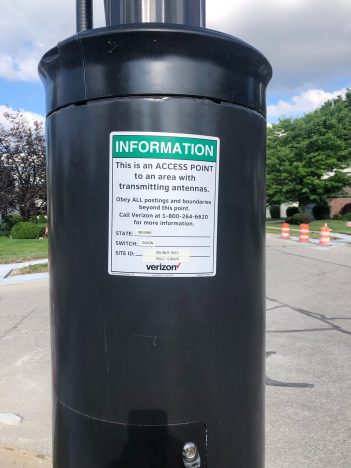 Information on a 5G cellphone tower near Bristlecone Drive. (Photo by Will Riddell)

Many of the new towers in the city belong to Verizon.

Tease and Butler are part of a coalition that represents more than 30 HOAs in the area. Their goal is to educate residents on what to expect as Verizon and other telecommunications companies implement 5G throughout Fishers. They are also concerned with the tower permitting process.

Although initial cell towers were located outside of neighborhoods, many Verizon towers are now scattered throughout various residential areas. According to Tease and Butler, the location of the towers has been a chief concern for residents.

“I’m very apprehensive about (the telecommunications companies) putting towers between the sidewalk and the road,” Butler said. “That, to me, is a huge safety issue for pedestrians (and) for kids playing tag. It just creates a ton of obstructions.”

One of Butler’s concerns is that the wide bases of the towers could potentially block pedestrians and children from a driver’s view.

Besides safety concerns, Tease and Butler said many residents aren’t happy with how the towers impact the aesthetic of the neighborhoods. According to Tease and Butler, Verizon has not been interested in listening to residents who have concerns about the placement and appearance of the 5G towers.

“Verizon is finding every letter in the law they can use to just say, ‘We’re going to do it,’” Tease said. “Any concerns on the homeowners about placement of the towers (and) appearance of the towers, they just disregard.”

As of press time, Verizon could not be reached for comment.

The Federal Communications Commission adopted a declaratory ruling in 2018 that outlined, among other things, the prevention of actions that greatly inhibit installation of 5G facilities. The 2018 ruling also addressed permit fees and the fact that local governments should have input with regard to a facility’s exterior design.

According to the city’s website, “The City of Fishers is required to allow 5G deployment by the ruling of the FCC. As a result, the City identified a resident-led process for 5G cell tower deployment.”

Tease and Butler aren’t against 5G technology, but they do want the voices of neighborhoods to be heard as the tower-building process continues. 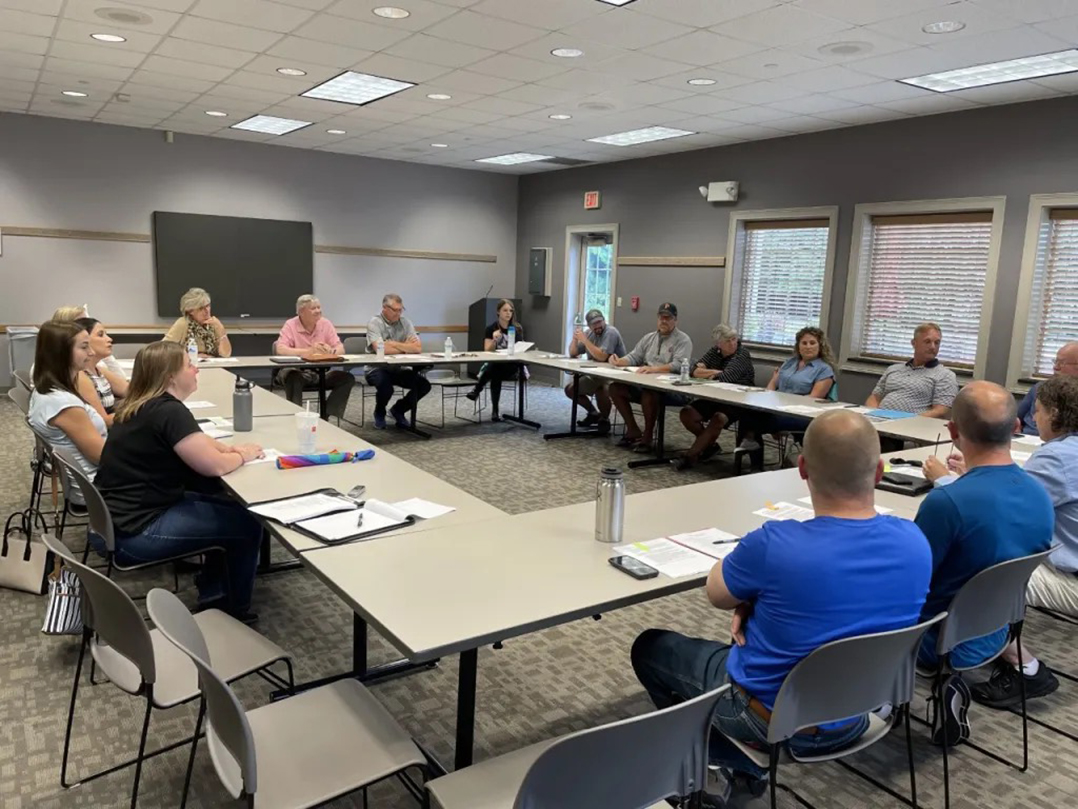 Residents discuss concerns about cell tower placement during a recent meeting set up by Geoff Tease of Fishers. (Submitted photo)

According to an email from Tease, “Our viewpoint is based on our experiences working with the City and the carriers and how the existing process favors the carriers at the expense of the neighborhoods.”

The coalition that Tease and Butler are a part of has met with Fishers Mayor Scott Fadness on multiple occasions.

“To me, the thing that I would hope comes out of (this story) is that people know that there are residents in the City of Fishers that are actively engaged in providing dialogue, trying to better the process and are willing to assist other neighborhoods and individual homeowners if they’re faced with this same situation,” Butler said.

The Fishers HOA Coalition can be reached at fishershoacoalition@gmail.com.

More information about the 5G rollout in Fishers can be found at fishers.in.us/1110/5G-Cell-TowerFiber-Deployment.