Carmel siblings Sadie and Evan Cohen have only gotten to act together one other time.

The siblings performed together in “Fun Home,” a coming-of-age musical with some more of an adult theme, at Footlite Musicals, which ended in March 2020.

This time will be much different as they appear in Jr. Civic Theatre’s production of “The Little Mermaid” June 24-29 at The Tarkington at the Center for the Performing Arts in Carmel. 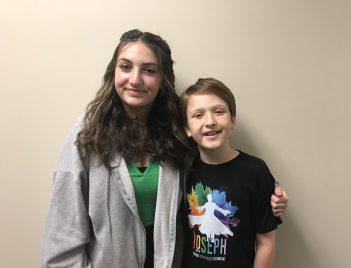 “It’s cool to show him around and see how everyone interacts with him,” Sadie said. “It’s also a fun experience because Civic is always a fun experience. It’s also fun to do it with my brother because we haven’t gotten to do many shows together. It’s fun to hang out with him.”

“I haven’t exactly played a villain, but it’s real cool to know the villain side of things,” Sadie said. “It’s been really fun. This is one of my favorite roles. There are a lot of cool effects that I get to do. I get to fly on the stage, and I haven’t done that before. That will probably take the role up a couple of notches.”

Evan said Flounder might already be his favorite character.

“I get to ride a skateboard,” Evan said. “It’s cool to interact with my sister and her friends because I hadn’t done any shows at Civic before. I’m meeting a lot of new people.”

Sadie and Evan are fans of the Disney animated show. Sadie has seen the production three times. She saw her friend Izzy Ellis, who attends Hamilton Southeastern Intermediate Junior High, play Ariel at her school. Ellis is playing Ariel in Jr. Civic’s production.

Sadie will be a Creekside Middle School eighth-grader in August and Evan will be a fifth-grader at Clay Center Elementary School.

“I don’t consider Veruca a villain. She is just more of a brat,” Sadie said.

Sadie also performed in “It’s a Wonderful Life” at Actors Theatre of Indiana in 2018 and was in “A Christmas Carol” at Indiana Repertory Theatre in 2019. She also appeared in Beef & Boards Dinner Theatre’s “Annie” in 2018.

Evan played young Charlie in “Kinky Boots” at Beef & Boards earlier this year. He most recently appeared in Carmel High School’s production of “Joseph and the Amazing Technicolor Dreamcoat” in May.

“My parents both did musical theater in high school, so I guess it got passed down to us,” Sadie said.