You are at:Home»Current in Fishers»Fishers Cover Stories»New vision: Fishers artist chronicles recovery from blindness through artwork

Mark Rouse thought his blurry vision was just part of aging. So, he thought it was time for a new pair of glasses and made an appointment to visit his eye doctor.

“I was experiencing very blurry vision and it was worsening very quickly in a matter of a couple days,” said Rouse, a lifelong Fishers resident. “I thought I was getting old, and it’s one of the things that happens when you get old. But I was wrong. I was diagnosed with diabetic retinopathy and was already legally blind.”

The 60-year-old painter and former Hamilton Southeastern Schools art teacher has been a diabetic for 20 years. But he never had significant health issues until his diabetic retinopathy diagnosis.

Fortunately for Rouse, through a series of surgeries, treatments and lifestyle changes, he has regained much of his vision and is displaying his artwork in an exhibit in Fishers City Hall. The exhibit chronicles his recovery journey with diabetic retinopathy. 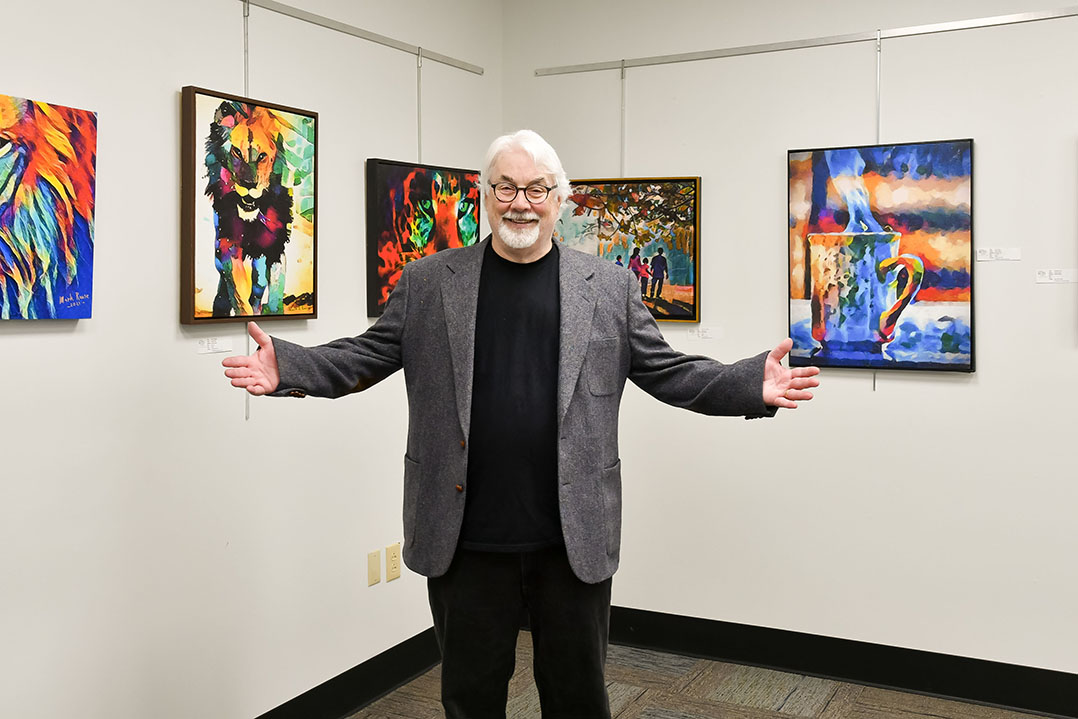 Mark Rouse displays his artwork exhibit “Through My Eyes” at the gallery in Fishers City Hall. (Photos by Dawn Pearson)

“My 28-piece show in the Alcove at City Hall is called ‘Through My Eyes,’ for obvious reasons,” Rouse said. “It will up be until the end of the Spark!Fishers Festival on June 25. I also have several pieces in the ‘Art of Racing’ exhibit, which runs through June 25. On June 23, as part of Spark!Fishers,  there will be ‘Cars and Art,’ a combination car show and art show by the City Hall, which will be open that evening and I’ll have a booth set up.”

The exhibits are sponsored by the Fishers Arts Council and Spark!Fishers, a Fishers Parks event.

For Rouse, the journey to recovery began when he saw Carmel ophthalmologist Dr. Raj Maturi of Carmel on the same day he received his diagnosis.

“I was devastated when this hit me,” Rouse said. “You always think you have time to do things. At that point, I was out of time, and I realized I may never paint again.”

According to the American Academy of Ophthalmology, diabetic retinopathy is the leading cause of blindness in working-age adults. It’s caused when high blood sugar damages blood vessels in the retina, and those damaged blood vessels can swell and leak, causing blurry vision.

Rouse listened to his doctor and made some lifestyle changes. He’s undergone nine surgeries and gets regular injections in his eyes.

“A lot of people will balk at the treatment, and it scared me to death for the first shot, but I don’t even think about it now,” he said. “I’ve had nine surgeries, and every six weeks I have to get shots in the eyes. I will take the shots every week if it means that I can see.”

Rouse said although Maturi told him he may not be able to restore Rouse’s eyesight, he could ensure Rouse didn’t lose any more vision.

Maturi credted Rouse’s determination for his quick recovery.
“As far as Mark, I have found him to be the ideal patient. He understood his disease and its seriousness and was a positive force in his care,” Maturi said. “What was most impressive to me was that through the process where his vision was quite compromised, he never let his poor vision come in the way of his first love – his art. He used his poor vision as a new way to look at the work and produced work that allowed me to see through his eyes.”

Rouse wants people to know there is hope and treatment for people struggling with diabetic retinopathy.

“The sooner a person finds out they have diabetic retinopathy, if they follow their doctor’s orders, the more likely they can restore your vision,” Rouse said.