Fishers Police Dept. arrested Avione Johnson, of Indianapolis, on charges of criminal recklessness, pointing a firearm, carrying a handgun without a license and intimidation, all felonies.

According to a press release, FPD responded to a report of shots fired shortly after 6 p.m. May 16 in the area of 106th Street and Lantern Road in Fishers. A witness told officers she observed a dark colored passenger car and a white pickup truck stopped in the roadway. The witness observed the driver of the passenger car, later identified as Johnson, allegedly fire a handgun in the direction of the other driver. Both vehicles immediately left the area. 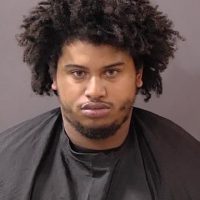 The release from FPD stated later that evening, the driver of the pickup truck contacted police to report he was the victim of a shooting. He further reported driving northbound on Interstate 69 when a dark colored passenger car forced him to exit at 106th Street. Once on 106th Street both he and Johnson stopped in the roadway and began arguing. During the verbal altercation, Jonson allegedly pointed a handgun at the victim and fired two times in his direction. Officers located damage to the driver’s side of the victim’s pickup truck believed to be from the shooting. The victim suffered minor abrasions to his left elbow and left shin from the shrapnel.

FPD detectives obtained a search warrant May 18 for a residence on Whipporwill Drive in Indianapolis. As officers were preparing to enter the residence a suspect, later identified as Johnson, was seen allegedly throwing a handgun from the balcony of the residence into a nearby retention pond.

The Fishers Police Dive Team recovered the handgun from the retention pond. Also seized from the residence were two rifles, a second handgun, 31 pounds of marijuana, and more than $7,000 in cash.

Johnson was taken into custody and transported to the Hamilton County Jail, where he is being held without bail.