You are at:Home»Current in Geist»Geist Cover Stories»Hans down: Heidelberg Haus staff installs 9-foot gnome outside of popular German café on Pendleton Pike

Motorists entering the City of Lawrence on Pendleton Pike from the west are now welcomed by a 9-foot fiberglass gnome named Hans. The figure joins hundreds of smaller gnomes for sale at Heidelberg Haus, a German café and bakery at 7625 Pendleton Pike in Lawrence.

“They used to be made out of clay and brought good luck and happiness to a home,” Jungbauer said. “Then they became really famous around 1840 when a British lord imported them to England.”

Jungbauer said its common for German residents to place a gnome near a flower garden, although not everybody is a fan of the traditional outdoor décor.

“Some people hate them too, just like everything else,” Jungbauer said.

Jungbauer’s daughter and Heidelburg Haus store manager Angela Corkwell had the idea to order the gnome quite some time ago but because of the labor shortage caused by the COVID-19 pandemic, the café didn’t have enough staff to set the figure up outside the shop.

So. it was stored inside a garage until it could finally be installed.

“We’ve had gnomes here the whole 50 years (we’ve been open),” Corkwell said. “They guard your property.”

Heidelberg Haus, which opened in 1968, sells groceries and trinkets, including hundreds of small gnomes placed throughout the cafe. Once a year, Jungbauer and his staff display the gnomes in the parking lot for a few hours in the summer. The tiny figures are posed doing different actions, such as watering flowers, riding a tractor or hiking. The café even has gnome T-shirts, with sayings such as “Hanging with my Gnomies” or “Gnomeland Security.” When a car crashed through the front display window of Heidelburg Haus several years ago, Corkwell said the staff set up a “gnome triage” station for all the damaged gnomes.

“They are happy things, people love gnomes,” Jungbauer said. “They bring happiness to a place. They make everybody smiles. Kids come and want to have their picture taken and their selfies taken.”

But not everyone is always comfortable around the unique ornaments, many of which sport beards and pointed hats.

“Every once in a while, we have a kid who comes in and is a little nervous around them,” said Corkwell, laughing.

Jungbauer hopes Hans the Gnome will become something of a landmark in Lawrence. He estimates the gnome weighs about 300 pounds. The staff used two-wheel dollies to move him.

“We tried to get him in the front door as a joke,” Jungbauer said. “He’s 2 feet wider than the door. We would like him inside, but he’s just too big.”

The café had a contest in July 2021 for customers to submit names for the gnome through social media. Hans was the most popular. Jungbauer said most people suggested common German names for the gnome, such as Frans or Fritz.
“People identify certain names as German,” he said.

For more about the cafe or the gnome, visit heidelburghaus.com. 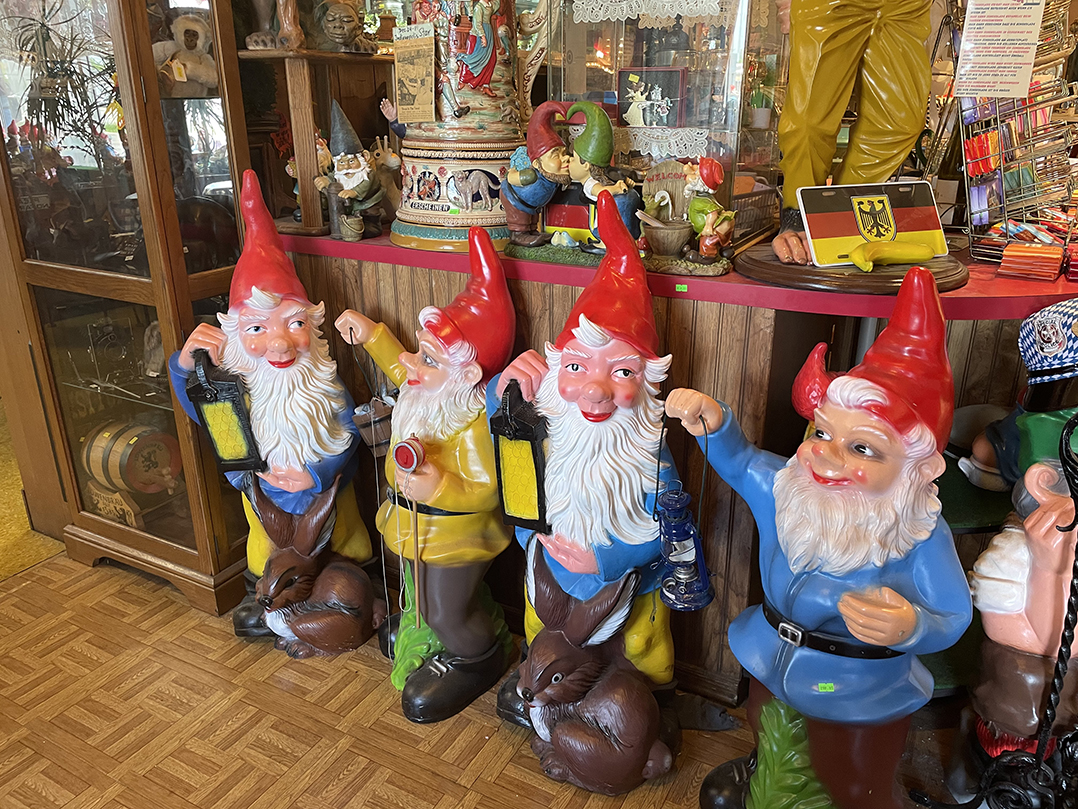 Heidelberg Haus owner Juergen Jungbauer said he estimates there are 600 gnomes throughout the café.

Heidelburg Haus owner Juergen Jungbauer said its common for German homes to display gnomes as good luck charms in their gardens, but there’s another tradition in Germany regarding gnomes.

“They have (groups) who swipe the gnomes. Kids swipe the gnomes and then set them free,” Jungbauer said. “All at once, gnomes will start popping up here and popping up there. The gnomes are being set free by some free-spirit person in Germany. If you’re a homeowner and somebody swipes your nice gnome, you’re not happy.”