You are at:Home»Current in Zionsville»Zionsville Cover Stories»‘We can be a great addition’: Zionsville negotiating with Graham Rahal to relocate automotive businesses to Creekside Corporate Park

After a bit of a stalled start, the Zionsville Redevelopment Commission has unfurled the green flag to begin term sheet negotiations with IndyCar driver Graham Rahal to relocate and expand his automotive businesses in Creekside Corporate Park.

The ZRDC voted during a May 6 special meeting to begin official discussions with Brownsburg-based Graham Rahal Performance and Rahal Ducati Indianapolis regarding their intent to purchase Lots 10 and 11 in Creekside, which is north of 106th Street east of Main Street.

Graham Rahal, a Zionsville resident, said he’s long been interested in relocating GRP to his hometown but that he settled on Creekside after his father, Indianapolis 500 winner Bobby Rahal, received approval in 2020 to build, with his business partners, a headquarters for Rahal Letterman Lanigan Racing on Lots 12, 13 and 14.

“We want to be an attractive part of the community, and I certainly hope we can do that,” Graham Rahal said. “I pushed tirelessly and endlessly for this opportunity with Zionsville because I am a resident and because I love what’s been started with RLL’s participation in Creekside. So, I think we can be a great addition.”

ZRDC commissioners voted at their April 25 meeting to move ahead with four other proposals to purchase lots in Creekside but tabled a vote on GRP so they could gather more information and feedback from existing tenants about the plan.

As proposed, the GRP project would require an amendment to Creekside’s planned unit development ordinance, which governs development standards for the park, to allow retail sales as a primary use on Lots 10 and 11. The ZRDC will review the request and other potential changes to the PUD to accommodate development proposals in the next few months.

Graham Rahal is proposing an 80,000-square-foot facility at Creekside Corporate Park with an all-inclusive automotive center that contains a vehicle service area, high-end vehicle sales and storage, a Ducati motorcycle dealership and offices for his foundation. He also aims to develop a second building with a restaurant and space for two other tenants. He expects to invest up to $30 million in developing the lots on nearly 10 acres and bring approximately 100 jobs to Zionsville.

Graham Rahal founded GRP in 2017 primarily as a service facility for high-end vehicles and a retailer of related parts, and it eventually expanded to include vehicle sales. The business started with 8,000 square feet of space and has grown to 30,000 square feet, but Rahal said continued growth has left it “busting at every seam possible.”

As the ZRDC considered the project, Councilor Bryan Traylor was among several town councilors who urged commissioners to approve the project before Graham Rahal decided to consider offers from other communities. Traylor said he only learned in March of GRP’s interest in Creekside when Graham Rahal reached out to the town council frustrated that 18 months of discussion with the town’s planning department had not led to a site for the project.

“It’s a little frustrating. We’re trying to demonstrate to the ZRDC how much interest the people of the town have in this property and how much sense this whole thing makes from a tax revenue standpoint for the town, as his businesses will bring in a very high-end clientele that we would love to have shopping on Main Street,” Traylor said April 28. “I really don’t see what the downside is to his proposal, so we’re just trying to get it pushed along. Essentially we can’t do anything until the ZRDC agrees to sell him the property.”

Wayne DeLong, Zionsville’s director of planning and economic development, said his department has been working with Rahal since 2020 but that the first two potential sites identified for GRP didn’t work out.

“The (planning department) staff has been working diligently to meet Graham’s expectations on multiple sites in Zionsville,” DeLong said.

“We’ve had our eyes on the Creekside property for about 18 months,” he said “In that time frame, we had other opportunities arise that we considered, but our top desire has always been the lots in Creekside. We’ve worked with both the administration and council to push forward and I’m very grateful as a resident of Zionsville of the measures they take to be sure new businesses that put roots down in the town will be a great match for the communities needs and desires.”

Now that GRPl and the ZRDC have entered formal negotiations, the next step is for the ZRDC to vote on a term sheet. If GRP receives the required town approvals, Graham Rahal said he hopes to have the project completed within 18 months. 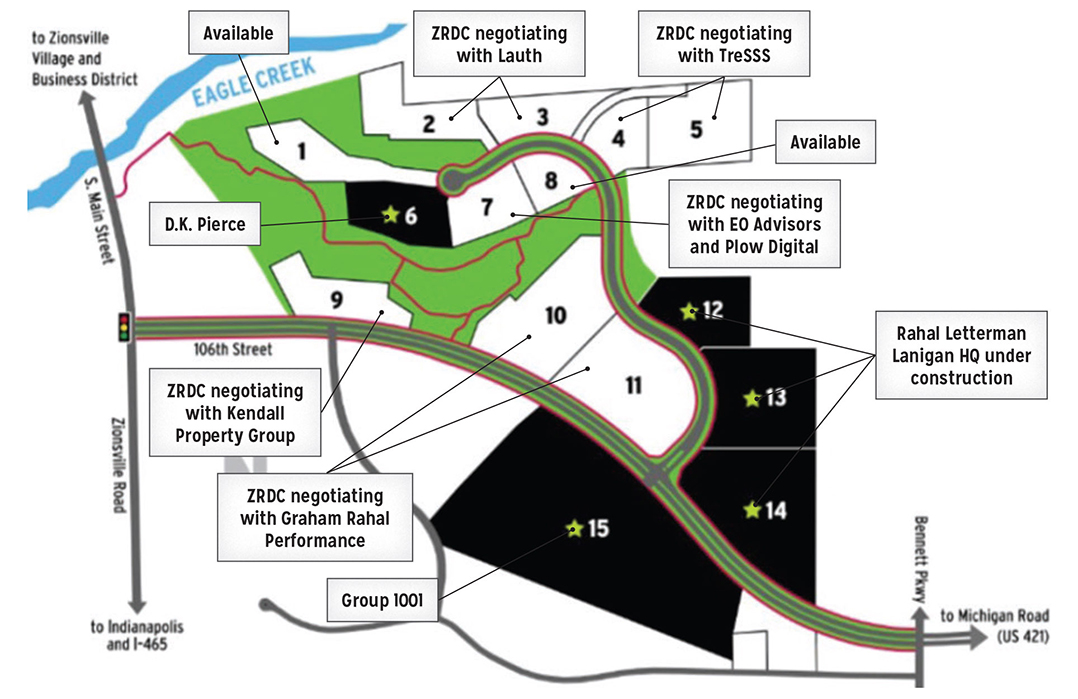 Lids – which has since been replaced by Group 1001 – became Creekside Corporate Park’s first tenant in 2016, followed the next year by D.K. Pierce. For several years, development of the park remained quiet until Rahal Letterman Lanigan Racing announced its plans to invest more than $20 million to build its headquarters there. That facility is expected to be complete this summer.

Zionsville Mayor Emily Styron, who took office in 2020, said she was perplexed by the lack of interest in the park in the late 2010’s and made it a priority to boost interest in the area.

“I didn’t understand how, when so much activity was happening on an economic development level in other areas of Central Indiana, we weren’t bringing them to Zionsville,” she said. “So, it was a real focus. I asked Wayne (DeLong, Zionsville’s director of planning and economic development) when I came into office, ‘What can we do?’”

Styron said Zionsville’s participation in the state’s Regional Economic Acceleration and Development Initiative Grant, which aims to make Indiana a magnet for talent and economic growth, has helped boost interest in Creekside. DeLong said emerging from the COVID-19 pandemic, combined with Styron’s efforts, have also contributed to increased interest.

“This economic development work takes a long time,” DeLong said. “This is the pinnacle moment where we’re getting to enjoy the fruits of our efforts that got some brand new fertilizer in 2020.”

Styron said RLL’s move to Creekside has led to other economic benefits for the town, as one of the team’s sponsors, Hy-Vee, announced in January that it would build its first Indiana grocery store in Zionsville.

“Every time Wayne and his team land a significant project there are tentacles that can be utilized to draw in more economic development. It really does create a ripple effect,” she said. “It’s exciting to see this team work so hard to capture those ripples.”