You are at:Home»Current in Noblesville»Noblesville Cover Stories»In bloom: City of Noblesville, Gordon family partner for Bridge of Flowers

When Sylvia Gordon traveled to Shelburne Falls, Mass., and saw the village’s Bridge of Flowers, she wanted to bring a similar blooming spectacle to Noblesville. So, she tasked her father, Noblesville and entrepreneur Dick Gordon, with the project.

Roughly 18 months later, construction on Noblesville’s own Bridge of Flowers is expected to begin soon on the Logan Street Bridge, which crosses the White River in downtown Noblesville.

City Engineer Ali Krupski said while Logan Street bridge was being rehabilitated in Noblesville in 2019, the city decided to add a pedestrian addition on the south side of the bridge. The city hadn’t yet conceptualized a project for the pedestrian area, but when the Gordon family came forward with the idea of incorporating a Bridge of Flowers into the space, the city agreed.

“The whole idea with this was various aesthetic improvements to the structure,” Krupski said. “There are planter boxes, permanent plantings and seasonal plantings every quarter.”

“The Bridge of Flowers will give people a place to gather in a common area,” said Adams, a Noblesville resident. “We are hoping it’ll be a destination site for people who want to take photographs like graduation photos or engagement pictures.”

The Bridge of Flowers will have perennial flowers, flowering shrubs, flowering trees and various annuals, such as wisteria hanging from pergolas. It also will have hostas, grasses, hydrangeas, hardy geraniums and cone flowers, among other plants.

“It’ll be a wide variety of perennials and things that will be blooming at different times,” Adams said. “There also will be annual beds with continual color all season.”

There will be some winter decorations, such as evergreen boughs, dried hydrangea blooms and ornaments.

Besides flowers, there will be two shade structures, seating and decorative lighting. Noblesville and Hamilton County agreed to split the $840,225 cost for the Bridge of Flowers evenly. Noblesville’s funds came from the downtown district committee. The Gordon family will be responsible for fundraising and purchasing the seasonal plantings going forward.

“It really will be a beautiful asset for the city and the county, and we are excited about the project going forward,” Krupski said.

Krupski said the city hopes the pedestrian walkway will be open to the public by July 1. There will be a 30-day lane restriction at some point during construction, but the Logan Street Bridge will remain open to traffic in both directions.

Gordon said he expects after the first year, maintaining the plantings and adding more flowers will cost between $30,00 and $40,000 per year. He and the Bridge of Flowers Committee are fundraising for the project. Gordon wants to raise enough money to start an endowment fund for the bridge. 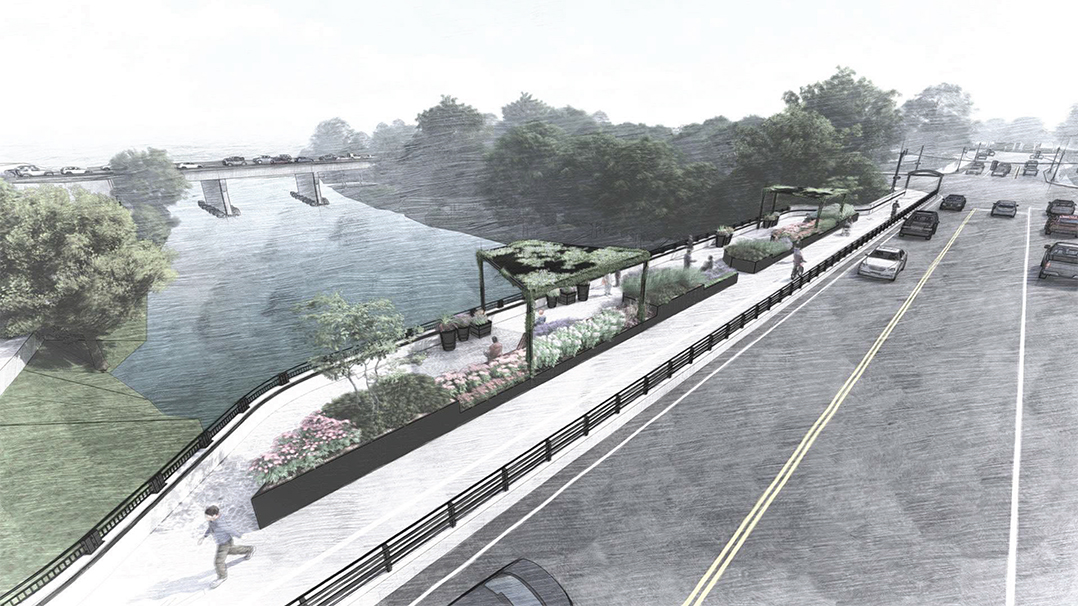 The Bridge of Flowers is under construction adjacent to the south side of the Logan Street bridge. (Rendering courtesy of City of Noblesville)

Peg Adams is the chair of the Friends of the Bridge of Flowers, a nonprofit that is supervising the project She’s worked in landscaping her entire adult life, both as a designer and an installer.

Adams retired from working during the height of the COVID-19 pandemic.

“I had been praying that God would give me something in the community to do, because before I was always working and I didn’t have time to do very much volunteer work in the community,” Adams said. “I was praying for an opportunity, and one evening Dick (Gordon) called me and said, ‘I need a chairperson for the Bridge of Flowers committee,’ and for me it was just an answer to a prayer. It gave me a way to use the skills I already have to give back to my community. It really touched me, and I’m all in.”