You are at:Home»Obituaries»Obituary: Elizabeth Wiest Johnson 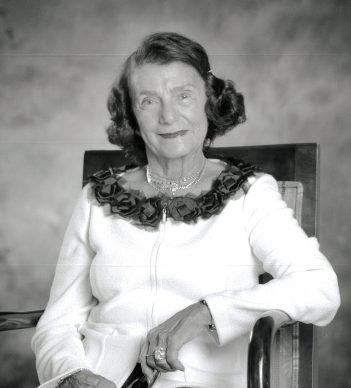 Liz, a passionate equestrian, has been quoted as saying, “I have devoted my life to hunting and showing and loved it all.” She and Sylvester raised and bred thoroughbred racehorses, and it was Liz who trained them to go to the racetrack. She won a race at the Royalton Steeplechase in 1976.

Liz began her horse riding experiences at Riverside Amusement Park, where as a child she rode ponies at the public stables. Liz’s brother, Edward Wiest, gave her his horse “Jennette Umber”, whom she not only hunted at the Traders Point Hunt Club, but showed as well. At age 18, Liz launched her career as a competitive rider, entering her first horse show in Devon, Pa., and placing fourth out of 68 horses in the Working Hunter Stake. It was just one of her many accomplishments in the show ring over the years.

Liz was prominently featured in Town and Country Magazine’s August 1951 edition spotlighting Indianapolis, and again in its August 1980 issue. She also appeared on the cover of the January 21, 1957, issue of Sports Illustrated, roller skating at the George Lyons estate in Bimini, Florida. Liz was an avid skier who received her ski instructor’s license in Aspen. She skied competitively in races in Aspen and Vail, winning gold, silver and bronze medals. She also was captain of her bowling team, and she won the Ladies’ Singles Tennis Tournament in 1960 at Woodstock Club.

Liz was showing horses and winning competitions across the country when she decided Indiana should have its own premier charity horse show. She was the founder and chairperson of the Traders Point Hunt Charity Horse Show, which originated in 1977. It began as a small two-ring, three-day country show and quickly grew into one of the most prestigious sanctioned horse shows recognized by the American Horse Show Association.

At its peak, Traders Point Hunt Charity Horse Show was a six-day, four-ring show, drawing more than 10,000 spectators and hosting more than 1,000 of the top horses and equestrians from the United States, Canada, and Europe. TPHCHS also featured the top grand prix and hunter/jumper riders from across the country. The Chronicle of the Horse, a leader in horse-show publications, ranked it as one of the five best shows in America. The event, whose proceeds supported Riley Children’s Hospital, donated more than $1 million to charities since its inception.

Liz’s Wild Air Farms, the 250-acre nature preserve on which the horse show grounds are located, has been the site of the Indianapolis Symphony’s “Symphony at Wild Air Farms”, the annual Traders Point Hunt Cyclocross Bike Race, and the Crows’ Nest Skeet Club, of which Liz was an honorary member.

As a member of Traders Point Hunt Club, Liz hunted the hounds as Huntsman at Traders Point Hunt for many years, and was awarded her Master Fox Hound colors in 1948 by MFH Cornelius O. Alig, Sr. Since then, she has assumed every field and staff position at one time or another and was elected Master of Foxhounds at TPH in 1983. Liz was always proud to say, “We’ve never killed a fox. Ours is a ‘drag hunt’, where the scent of the fox is laid by the drag boy and the hunt across the land is planned ahead. If a fox appears, the Whips stop the hounds, so they don’t catch the fox.” Liz was in charge of the registered Midwest Hunts when she was on the board of the Master of Fox Hounds for six years. She also rode in Midwest Steeplechase Races and won.

Liz served the community as a member of the Indianapolis Garden Club, the Junior League of Indianapolis, the Christamore Aid Society, and the Christamore House Guild, for which she performed as a Rockette in its fundraiser at the Murat Temple each year it was held. Liz was an honorary member of the Indianapolis Athletic Club. She was also a member of the Indianapolis Dramatic Club and Lambs Club. She received “The Sagamore of the Wabash” from Gov. Frank O’Bannon on Dec. 14, 2002. On April 30, 2010, Liz received the “Park Tudor School Distinguished Alumni Award” recognizing alumni who have made substantial contributions to their communities. Liz also received the United States Equestrian Federation Lifetime Achievement Award for her contributions to the sport and the support she has given to literally thousands of riders through the years. She was a former member of Second Presbyterian Church in Indianapolis, and she was a member of St. Francis of the Fields Episcopal Church in Zionsville.

Liz is survived by her son Dr. Sylvester Johnson, IV; grandchildren Zachary H. Johnson, Daphne Johnson Berger, and Brittany D. Johnson; and great-grandchildren Jackson Brooks Berger, Hudson H. Berger and Cassia W. Berger. She also will be greatly missed by her many friends and the countless equestrians who benefitted from her devotion to horses, the hunt, and her beloved Traders Point Hunt Charity Horse Show. Liz was preceded in death in 1999 by her husband, Sylvester Johnson, Jr.; her brother, Edward H. Wiest, Jr.; and by her son, Johnny Johnson.

The public is invited to a visitation from 4-7 p.m., Tuesday, May 10 at St. Francis In-the-Fields at 1525 Mulberry Street in Zionsville. A private funeral and burial service is planned for a later date.

In lieu of flowers, contributions in memory of Liz may be made to Riley Children’s Hospital, c/o Riley Children’s Foundation, 30 S. Meridian St., Suite 200, Indianapolis, IN 46204-3509. Online condolences may be made at www.flannerbuchanan.com. Arrangements are entrusted to Flanner Buchanan – Zionsville.

‘Peter and the Starcatcher’ lands at Fishers High School