As the City of Westfield and the Indiana Dept. of Transportation begin acquiring property along the roadway and utility relocation for the Ind. 32 widening project through downtown Westfield, the city’s streetscape committee is working to create an aesthetically pleasing backdrop.

“How this whole thing came together is, in our comprehensive plan for the downtown, there are some implementation items that were never really completed and there wasn’t a lot of interest in the downtown when that portion of the comprehensive plan was put together,” Burkman said. “Now, because we are seeing so much interest from both the developers in the community, our citizens and our local businesses, it’s a really great time to gather a lot of stakeholders and put those definitions together.”

The streetscape committee held a public meeting April 14, when it showcased renderings of the Ind. 32 streetscape. Burkman said more than 100 people attended.

“The attitude and feedback we received from the open house were extremely favorable,” Burkman said.

“That’s really been intentional from the committee,” she said. “We have heard so much from the community about greenspace and open space and trees and this love of nature. That is what the team came back with as a focus point for the downtown. We would love people to feel like they are driving through a park as they drive through our downtown.”

Burkman said the streetscape is “everything but the roads and the buildings.” Streetscape includes lighting, landscaping, sidewalk materials, benches, trash receptacles, bike racks, awnings and gathering spaces, among other items. It also could include artwork at the two roundabouts in the project. One is at Westfield Boulevard, and one is at East Street.

“It’s a combination of thinking about all those different elements and how it can really make our downtown vibrant and different from our neighboring cities, so it’s a very exciting project,” Burkman said.

The streetscape committee is responsible for overseeing all streetscape projects in downtown Westfield, but Burkman said the team started with Ind. 32 because of the INDOT project. Because Westfield and INDOT are splitting the cost of the project, Burkman said it gives the city an opportunity to direct resources to the streetscape.

“We have the ability to impact how the streetscape looks along there due to the cost share we are doing with INDOT,” she said. 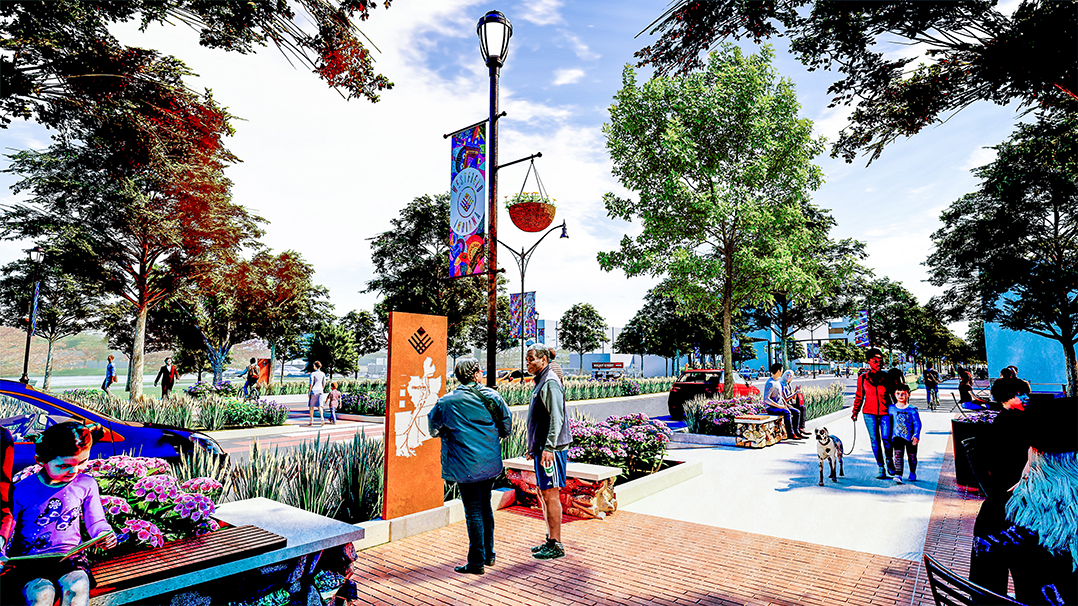 A conceptual rendering of streetscape along Ind. 32.

Westfield City Council president Mike Johns also serves on the streetscape committee and said streetscape enhancement along Ind. 32 is a priority. Cost estimates haven’t been announced, but Johns expects the figure to be least $4 million, if not closer to $5 million.

The city is paying for its share of the Ind. 32 construction using road impact fees, but Johns said construction will completely deplete the fund. He said he expects the council to pursue a general obligation bond to cover the streetscape cost, although a bond hasn’t been presented to council.

“We feel like this is a once-in-a-lifetime opportunity that comes around once a generation to do something like Ind. 32,” Johns said. “It’s important we make it the best we can make it. It goes through the heart of our town. I don’t know if you can skimp on it. It needs to be done properly.

“We want this to look as good as it can look. That’s extremely important.”