Jannon (Roland) Lampley was hired as the head girls basketball coach at Lawrence Central High School at the April 25 Metropolitan School District of Lawrence Township board meeting. The vote was unanimous. 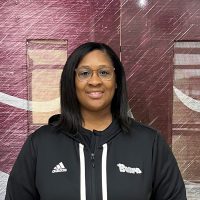 Lampley graduated from Urbana High School in Ohio in 1993. She helped lead the team to three state Final Fours and was the state’s 1993 Gatorade Player of the Year and Ms. Basketball and a Kodak All-American. She attended Purdue University, majoring in organizational leadership and supervision.

During her four-year playing career, she helped lead Purdue to Big Ten titles in 1994, 1995 and 1997. She hit the buzzer-beating three-pointer that helped the Boilermakers shock fifth-ranked Vanderbilt to reach the 1994 NCAA Women’s Final Four, an effort that garnered her an ESPY nomination.

Lampley scored 1,662 points, grabbed 582 rebounds and had 259 assists at Purdue. She was the second player in Purdue history to rank in the top 10 in each of those categories. She was named the 1997 team’s Most Valuable Player and Big Ten Player of the Year.

Lampley went on to play for the Columbus Quest in the American Basketball League and was a 2009 Ohio Basketball Hall of Fame inductee. She was drafted by the WNBA’s Orlando Miracle and helped the team advance to the 2000 playoffs for the first time in team history.

Lampley was an assistant women’s basketball coach at Purdue from 2003 to 2006 and founded and directed the Indiana Blaze AAU program in Fishers in 2016.

“Coach Lampley has dedicated her professional career to basketball and the development of young women in the sport. We are excited to see her take the reins of the girls program at Lawrence Central and look forward to celebrating program success,” MSDLT Supt. Shawn Smith said.

“We are excited for Coach Lampley to lead our girls basketball program and continue to play an impactful role in our school community,” he said. “Her coaching experience, along with her dedication to player and program development, make her the best candidate to lead our young ladies on and off the court.”

Lampley and her husband, Kenneth, have five children in the MSDLT district.