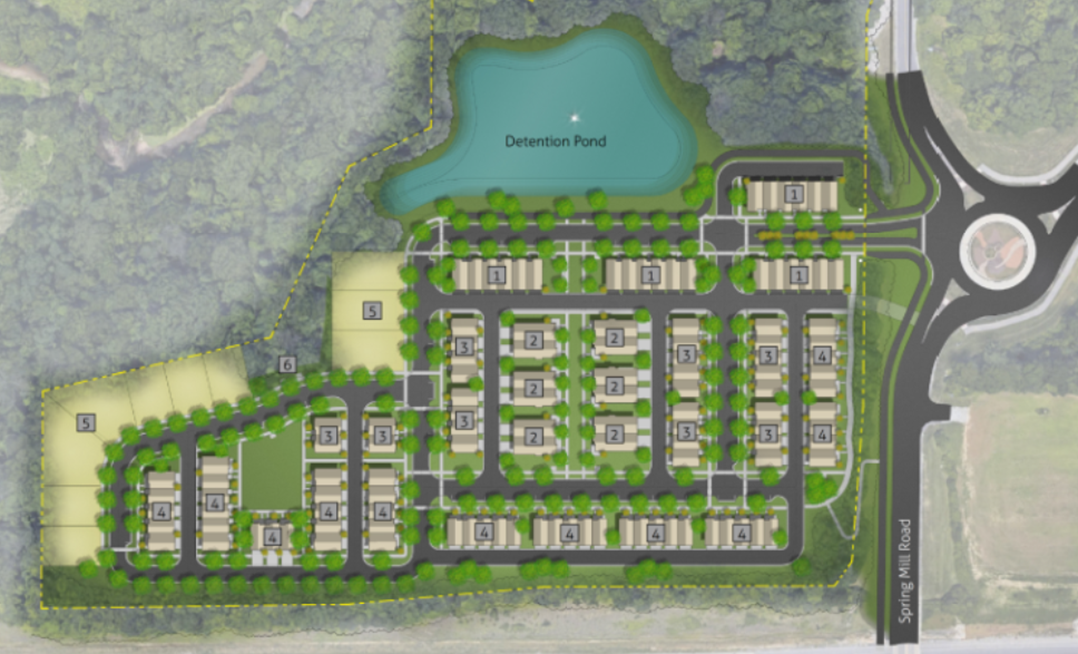 The site plan for the proposed Flora on Spring Mill residential development. (Image from filings with the City of Carmel)

The Carmel City Council met April 18 to vote on the Flora planned unit development, hold a public hearing on proposed updates to the comprehensive plan and more.

What happened: The council voted 5-3 to approve the Flora planned unit development District.

What it means: Flora, a new subdivision developed by Pittman Partners and Onyx + East on Spring Mill Road just north of I-465, will have 129 dwellings that include townhomes, duplexes and single-family homes on 18 acres. Councilors Miles Nelson, Tim Hannon and Tony Green voted against the PUD, which replaces the previous S-2 residential zoning with a plan developed specifically for the site.

What’s next: Construction is set to begin in the fall.

What happened: The council introduced a resolution to adopt the updated Carmel Comprehensive Plan and held a public hearing on the document.

What it means: The comprehensive plan, which is updated approximately every decade, provides nonbinding guidelines for development or redevelopment throughout Carmel. Concerns raised during the public hearing included light pollution, increased density and a lack of response from city officials regarding some of the public feedback. The city continues to seek public feedback on the plan, which may be viewed at carmelcomprehensiveplan.com.

What’s next: The council’s land use committee will discuss the plan before sending it back to the full council for a vote. A meeting date was not announced as of press time.

What happened: The council approved several amendments to its parking ordinance.

What it means: Among the amendments is the addition of a vehicle sticker for employees of merchants near Carmel Clay Schools that allows them to park on public streets where it is otherwise prohibited within 2,500 feet of a CCS campus. Other amendments made minor adjustments to account for changes in state law.

What happened: The council voted to reappoint Shannon Minnaar to the Carmel Cable and Telecommunications Commission.