After sustaining an injury in 2018 that forced him to retire from his lifelong passion of gymnastics, Cole Richey, a 17-year-old senior at Zionsville Community High School, was medically cleared to compete again in October of 2021 and recently qualified for USA Gymnastics nationals in the still rings event with only five months to prepare.

Cole was one of two individuals in the region five regionals who qualified for nationals, and he will compete at nationals in Mesa, Arizona from May 11-15.

Russ Richey, Cole’s father, said the fact that he is going to nationals with the limited time to prepare is an extremely rare feat.

“He’s too humble, so he won’t tell you this himself, but it typically takes around a year to prepare for an event like this in normal circumstances,” Russ said. “But for Cole, because of his injury, he had already missed three years, which set him back a lot, so it should’ve taken him much longer to prepare. It’s nearly unheard of.”

For the most serious competitors, gymnastics is a continuous sport with no offseason. And for gymnasts who aspire to make it to level 10 nationals, which is the highest rank in USA Gymnastics, training usually begins around age 4, according to the Richeys.

“If you want to become nationally known in this sport, in almost all cases, you have to work from age four to senior year without breaks,” Cole said. 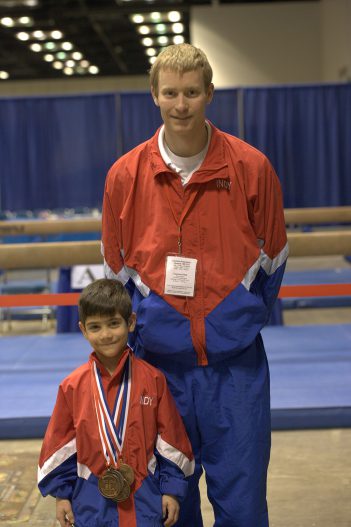 Like most national qualifiers, Cole began training at age 4. He got his start at Interactive Academy in Zionsville with coach Craig Christie, who has been his lifelong coach. Cole and Christie have spent, on average, 32 hours a week in the gym ever since.

But in 2017, Cole began experiencing pain in his back that wasn’t going away and was affecting his performance. The Riches consulted several doctors before finally coming across one who gave them a diagnosis.

Cole had a pars fracture in one side of his vertebrae. For the fracture to heal, he had to wear a soft back brace for nearly eight months. When he recovered, began training again and eventually qualified for USA Gymnastic nationals in 2018 in the level 9 all-around competition, where he tied for 13th.

But not long after the competition, Cole’s back pain returned.

Rather than risk surgery, Cole reluctantly retired from the sport.

“I felt like I had lost my identity. I was always known as the gymnastics guy,” Cole said. “I got a therapist afterwards because I was not in the greatest of places. It took about a year and a half to get over it. Mentally, it was really, really hard.”

But Cole didn’t stay away for long. Reflecting on his childhood memories at Interactive Academy and the sport’s impact on his life, he decided he wanted to be a coach.

Cole began coaching children ages five through eight, but soon began feeling the urge to get back into the sport.

“I really couldn’t resist trying to get back into it since I was around it all the time coaching,” Cole said. “Eventually, I asked my parents if we could go back to the doctor to see if there was anything I could do.”

Cole was medically cleared to return to the sport in October of 2021, but only for still rings. Despite only being cleared for one event, he was thrilled to compete again.

“I actually couldn’t stop smiling on the way home,” Richey said. “I was super happy. I was a little nervous, you know, because I didn’t know where my performance level would be at when I came back, but I thought of it as a way to prove to myself that I can still do it. I wanted to put my all into it and see where I could be by the end of the year.”

Cole has been accepted to the University of Cincinnati and plans to study biomedical sciences. 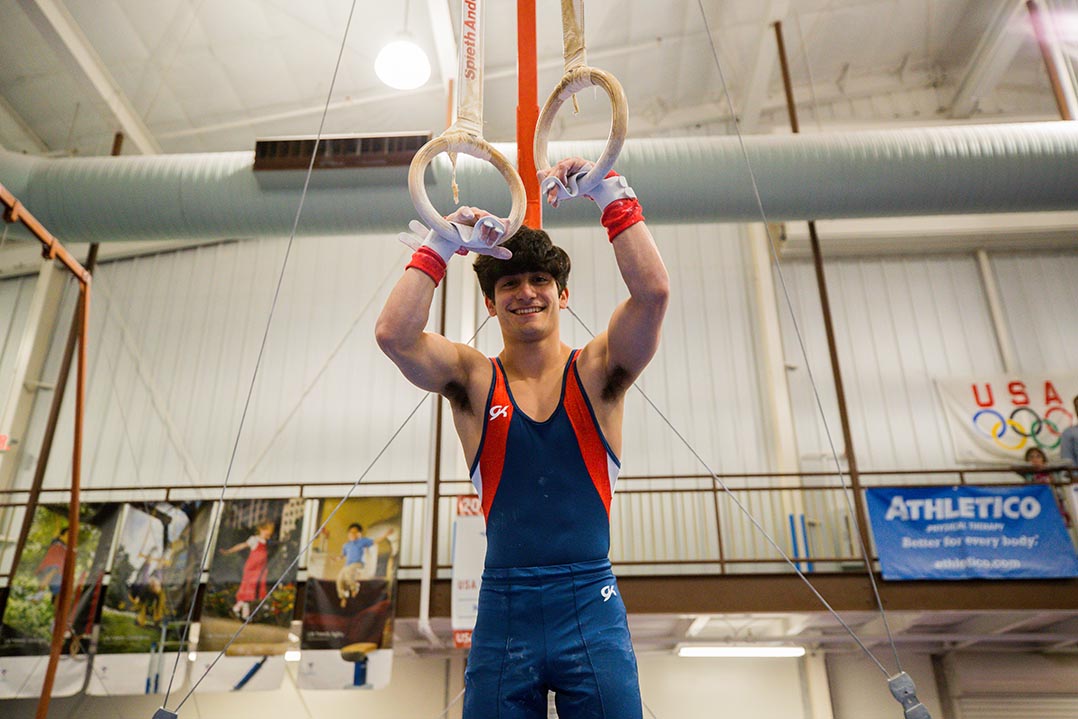 Cole Richey pauses with the still rings in hand. (Photo by Rachel Greenberg)

After retiring from gymnastics because of a back injury, Cole Richey took up rock climbing to get his mind off gymnastics.

“More than anything, it was a way to fill the time that used to be filled with gymnastics,” Richey said.

Richey qualified for speed climbing in USA Climbing nationals for rock climbing competitions but turned it down because he didn’t enjoy it enough to fully commit.

“Gymnastics definitely translated to it with upper body strength and body awareness,” Richey said. “I wasn’t bad, but the passion just wasn’t there. It was just more of a hobby.”