You are at:Home»Current in Noblesville»Noblesville Cover Stories»In the cards: Noblesville resident forms competitive league for students in sixth through 12th grade

When Josh Cecil’s son entered middle school, he wanted to find an avenue for him to make friends outside of the traditional classroom or sports team.

So, the Noblesville resident formed a community group around his son’s favorite activity, Magic the Gathering, a collectible card game. The gaming group is called the Moonshot Youth League. 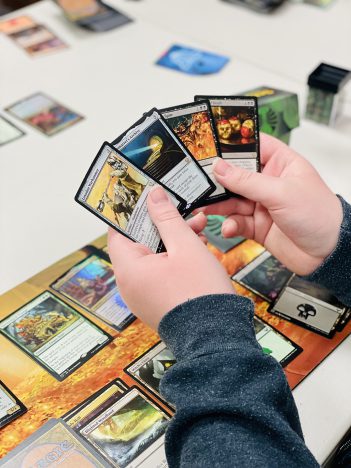 Members of the Moonshot Youth League are playing the collectible card game Magic the Gathering this season.

Cecil, the communications manager at Moonshot Games in Noblesville, is finishing up the group’s first six-week run at the game store. Players meet from 4:30 to 6:30 p.m. Tuesdays and Thursdays. Tuesdays are designed for “hang and play,” where participants play the game in a relaxed manner. Thursdays are designed for competitions and participants compete for points. They accumulate the points throughout the season, and at the end of the season, the player with the most points is crowned the champion.

Players range in age from sixth to 12th grade. The league has eight players.

“I thought (his son, Emerson) just needs connection, he needs friends, he needs something to be excited about and something to look forward to,” said Cecil, a Noblesville resident. “He’s in this big school and he’s not connected and he’s not the only one. There has to be hundreds of kids, especially during like COVID, feeling disconnected. I’m seeing it has a horrible effect on mental health.

“So, I thought, well, why don’t I create a league where these kids that maybe don’t get connected via usual pathways (like) sports or clubs and help kids get connected and make friends and give them something to look forward to each week.”

Emerson said he’s made friends by playing in the league.

“It’s a great place to go and play the games you like and meet other people who play them and make friends,” he said.

Cecil said he wasn’t sure how many people would be interested in the league, and he’s happy with the number so far.

“Eight has been a pretty good number. All the kids have showed up and everybody is really excited,” Cecil said. “My son’s attitude this semester compared to last semester is night and day. He’s excited, especially on Tuesdays and Thursdays, and it has carried over into the other days of the week.”

The registration fee for the league is $175 per season, which runs six weeks. The league awards $100 scholarships, which all eight students have received this season. The fee purchases a starter kit with a few decks of cards for Magic the Gathering and a T-shirt.

Noblesville High School senior Erick Mercado joined the group because he wanted to learn how to play Magic the Gathering.

“I think the main reason I joined is I wanted to learn the game,” Mercado said. “I didn’t know how to play, and the younger ones taught me. I didn’t mind it. I was just having a fun time playing with everyone, even if there’s an age gap.”

Mercado said none of the clubs at school offer games.
“The atmosphere is different,” he said of the Moonshot Youth League. “When you’re at school, you kind of filter yourself a little bit. I feel more like myself here.”

Cecil said the league might eventually feature other games, such Pokémon, Settlers of Catan, Dungeons and Dragons and other multi-player games.

For more, email Cecil at josh@moonshotgamestore.com. 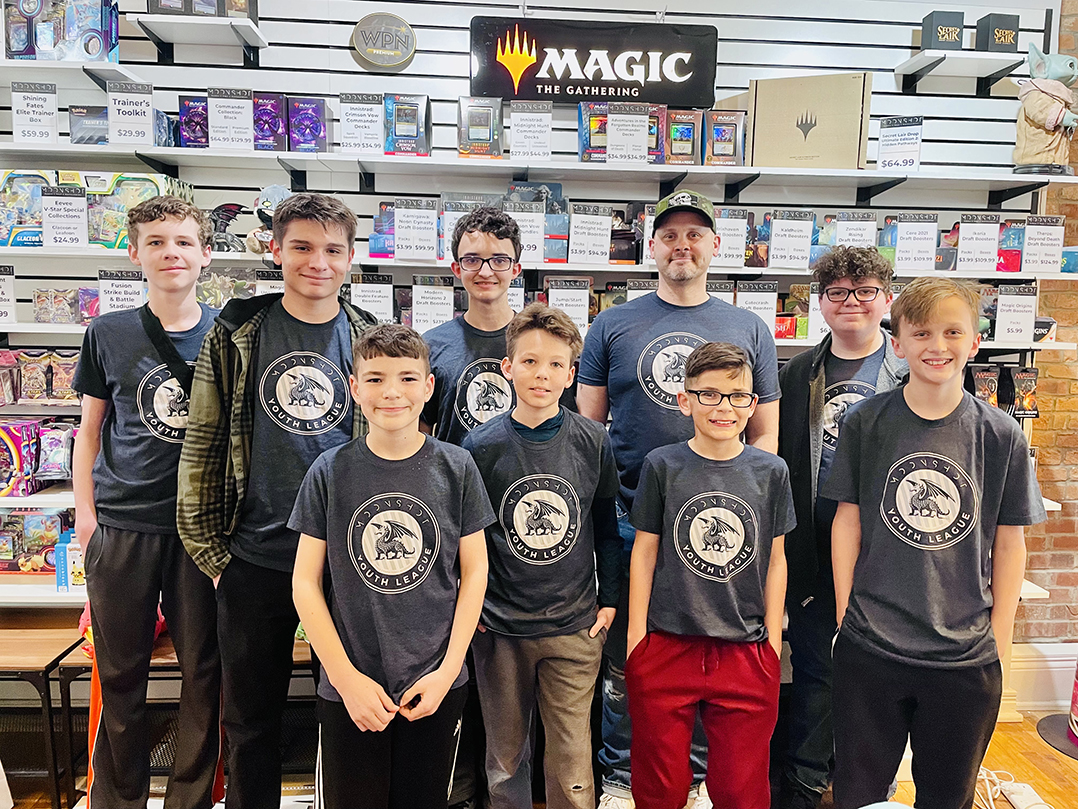