Sgt. Elizabeth Frost is a familiar sight at Zionsville Middle School, where she’s been a full-time school resource officer since April 2021. 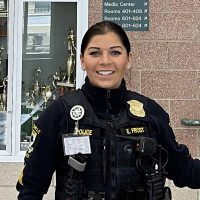 Frost and the other SROs in Zionsville schools are  sworn law-enforcement officers with arrest powers who work in a school setting and coordinate with administrators to maintain a safe and secure environment.

On any given day, Frost can be found monitoring lunch in the cafeteria, walking the halls and directing traffic to and from school. 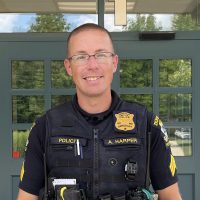 “I have had several situations where I have had an opportunity to help a student by talking to them, following up on traumatic situations in their life and making sure they are safe,” Frost said. “The No. 1 goal of an SRO, along with the educators we work alongside, is that each of our students are safe, maintain their well-being and help them be the best student they can be in a safe environment.”

Sgt. Adam Harper agrees. He’s been an SRO at Eagle Elementary School for about nine months. He said the more SROs are “out and about” in the school, the more likely they are to be approached. Two interactions at the school standout to him, one with a student and one with a staff member. 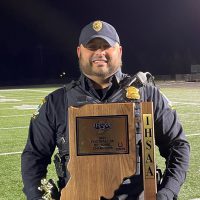 “A few weeks into the school year, I had a student and a teacher both approach me independently,” Harper said. “Each opened up about their views of law enforcement and not liking police officers because of what they have been told or seen. They had each explained that due to their upbringings, recent stories in the news and not ever having met an officer before, they thought police were out to hurt people. They both had stated that seeing me be so friendly and outgoing with everyone led them to want to reach out and explain their story to me.

“I was the first officer they had ever really met or interacted with before, and I wasn’t what they were expecting or what they had been told police officers were like. These two situations mean the world to me.” 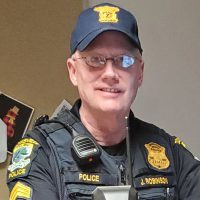 Zionsville Community Schools has a police presence in every school every day, according to ZCS Supt. Scott Robison.

“We feel better protected and surveilled than at any other time in our existence, but no one on their team or ours is complacent,” Robison said. “Safety is the continual process of planning, coordination, cooperation and never-ending vigilance. As our safety leader Chad Smith often says, ‘There is no finish line with safety.’”

Robison said the role modeling of professional police officers who work in the schools often “paves the path to positive relationships with students.”

“And this is an outstanding net addition to their importance here, but I would not call their roles dual, even though there is often a dual benefit of having them here,” he said. “Foremost, these serious professionals are on duty to serve, protect, anticipate, plan and respond in coordinated ways, no matter what the incident.” 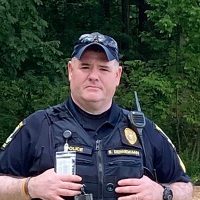 ZMS Principal Mitzi Macaluso said an SRO is an important part of the team at the school and that they are fortunate to have Frost.

“At any point during the day, you might find her directing traffic for the school, opening a milk carton in the cafeteria, playing kickball with kids in (physical education), talking to a concerned member of the community or helping out in a classroom during a science lab,” Macaluso said. “She is someone who does it all, and always does it with a smile.”

Robison said the district has plans to add more SRO’s.

“We are a growing school community with a new elementary school coming on line in the fall,” he said. “We are always analyzing what coverages best benefit safety in and around our schools, and we have responsive police leaders as partners who are professionals leading over to us from their expertise and training as regards to ongoing enhancements to our safety protocols. And let’s not forget that with nearly 2 million square feet under roof in our schools, we rely on the expertise and counsel of the Zionsville Fire Dept., too.

“Safety must always be top of mind.”