You are at:Home»Current in Geist»Geist Community»Hofmann to retire Jan. 28 after six years as Lawrence Police Dept. chief 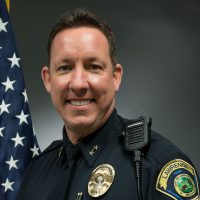 After six years as chief of the Lawrence Police Dept., David Hofmann has announced his retirement, effective Jan. 28.

Hofmann, 52, was appointed chief Jan. 1, 2016, by Lawrence Mayor Steve Collier. Prior to that, he served for nearly 20 years with the Indianapolis Metropolitan Police Dept. According to a press release from the Lawrence Police Dept., Hofmann “played a critical role in promoting the department’s growth and development into a premier law enforcement agency in Central Indiana” during his tenure as chief.

As chief, Hofmann oversaw the design and construction of the department’s new state-of-the-art police headquarters, training facility and 911 Dispatch Center at 5150 N. Post Rd. The headquarters opened in 2019. Hofmann also was instrumental in establishing a body-camera system to be worn by all LPD officers while on shift.

“When I reflect on the six years I was blessed to be the chief of LPD, I am most impressed not by the bricks and mortar of an amazing headquarters building; not by cutting-edge body worn cameras, nor the huge national success of reality TV,” Hofmann stated. “I am most astounded by the amazing work done every day and night by the great people who are the Lawrence Police Department. They perform with ultimate professionalism, fairness and compassion under the most tense, uncertain and rapidly-evolving situations, and they do so with the ultimate goal of providing the best protection and service for all residents and visitors here in Lawrence.”

“In November of 2015 when I offered Chief Hofmann the position of police chief, I was never more confident that he would prove to be just the kind of steadying leadership that this city needed,” Collier stated. “He has proven to be one of the most admired chiefs in Central Indiana, and it gives me great pleasure to see the impact that he has had upon the City of Lawrence.”