You are at:Home»Current in Zionsville»Zionsville Community»Harris pursues dream of becoming Boone County sheriff 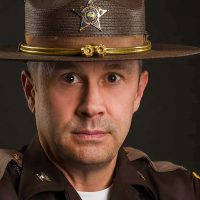 “Around the time when I was a 6-year-old growing up in Boone County, the sheriff at that time was Webb Allen,” said Harris, who is chief deputy in the Boone County Sheriff’s Office. “His presence was bigger than life to me. I had the dream from then on to be sheriff one day. I hung onto that dream, taking the necessary steps along the way to make it a reality. At the age of 23, I applied to the Boone County Sheriff’s office and was hired by Ern Hudson.

“Fast forward through 27 years of service, four promotions by three different Boone County sheriffs, the support of a loving family and friends, I now am in position to make my dream a reality by becoming the next sheriff of Boone County.”

Harris has filed his paperwork for his candidacy for sheriff in the May 3 primary election. The other Republican who has filed so far is BCSO Deputy Scott Pell. Sheriff Mike Nielsen is not running for reelection because of term limits.

“I have learned through the years that the office of sheriff is bigger than any one person,” Harris said. “It takes a team to make it happen, and I can assure you that what you currently have in place is an incredible team that I’m proud to be a part of. It’s our plan to build upon the foundation of the past administrations. I’ve never quit and never will.”

Harris has moved up the ranks from sergeant to captain to chief deputy.

“Over the course of my career with the Boone County Sheriff’s Office, I have had the opportunity to interact with every division in the BCSO, from the deputies on the road to operating the jail,” Harris said. “In my current role as chief deputy, these divisions report to me on a regular basis, allowing me to constantly interact with the deputies/staff on the issues of the day. This includes the moments when Nielsen calls on me to step in as acting sheriff in his absence.

“I believe this experience sets me apart from anyone else and provides me with the perspective to manage the BCSO (and) to serve Boone County citizens and their tax dollars in an effective and efficient manner. I’ve learned invaluable lessons from each sheriff I’ve worked for and will apply them to my administration.”

Harris lives in Boone County on a small farm with his wife, Chastity, and their four children, two dogs and two longhorns.

“I’ve dedicated my entire life to this place I call home and continue to make it my number one priority to serve and protect,” Harris said.