Kauffman built the chest, his first piece of furniture, in 2000. More than two decades later, he’s celebrating the 10th anniversary of Kauffman Fine Furniture in Noblesville.

Kauffman married his wife Audra in 2002, and then the couple moved to Boston to attend graduate school. Kauffman obtained master’s degrees in Old Testament and Biblical Languages but never lost his interest in furniture making.

So, Kauffman enrolled in the North Bennet Street School, the oldest trade school in the U.S. Shortly thereafter, he developed an appreciation for making 18th century-style furniture.

“The training at North Bennet Street focused on that period and those styles, but I would still prefer it, anyway, even if the school hadn’t focused on that,” he said. “To me, it represents the pinnacle of furniture. The designs, the embellishments were phenomenal and are unsurpassed in furniture making. The carving, the inlay, the proportions – they’re still appealing today to many people.

“They fit in historic homes and even in modern homes.”

Kauffman graduated from trade school in 2007, and he and his wife moved to Pendleton, where Kauffman started his fine furniture company. The couple moved to Noblesville in 2012. 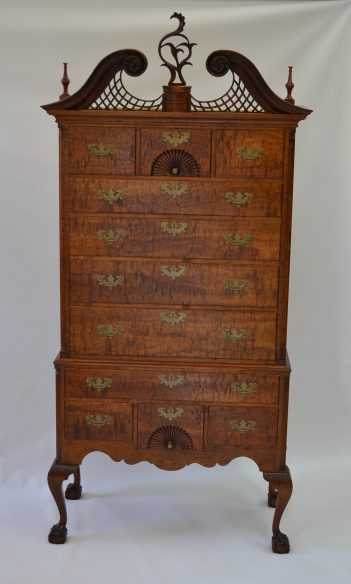 Most of Kauffman’s work is commissioned.

“I do several shows a year,” Kauffman said. “I exhibit in furniture shows and period artisan and craftsman shows. I set up some spec pieces I’ve built and take commissions, so 90 percent of my business is commission work. Occasionally, somebody will happen upon my website.”

One such piece was commissioned by Wendy Williams, a resident of Haddonfield, N.J.

Williams met Kauffman at a show in Pennsylvania, where she purchased a Queen Anne dresser. She later commissioned several pieces, including two side chairs. One of the original chairs was held at Winterthur Museum, Garden and Library in Delaware.

“He and I visited Winterthur with one of the gracious people there so he could study it, and he made two chairs for me,” Williams said. “I’ve commissioned quite a few pieces from him. He is an absolute master at choosing wood and using that in the design of the piece. There’s a beautiful flow and fluidity to his pieces. I think he’s a treasure.

“I think he truly is a treasure, because he’s continuing an amazing craft that few people have the skill or willingness to do anymore. He’s making beautiful art pieces for everyone’s home.”

“I have a period tent and a period outfit, and I do the same thing at outdoor shows as I do indoor,” Kauffman said. “It’s just I dress in period attire.”

Shows are usually on the East Coast.

“That’s due primarily to the fact that people who live out there are familiar with this kind of furniture, and they appreciate it and want it for their 18th-century house,” Kauffman said.

Kauffman’s pieces can take up to 500 hours to finish. Prices range from a few hundred dollars to tens of thousands of dollars, depending on the piece.

Some of Kauffman’s clients are repeat customers, such as Jim Connolly, a resident of Fredericksburg, Va.

“He had some wares for sale, and he had a small Chippendale mirror I’ve been looking for but couldn’t find in any quality,” Connolly said. “He had one with tiger-striped maple. I was really taken with it and how pretty it was.”

Connolly was carrying only a credit card, and Kauffman didn’t accept credit cards.

“My checkbook was at home,” Connolly said. “So, (Kauffman) said, ‘Take it home and send me a check if you like it, and if not, send it back to me,’ which I found incredible in this day and age. So, I took it home and immediately wrote a check and asked him to make a shelf. It hangs in the doorway of my home. It’s an iconic piece of Americana that hangs in my house.”

Connolly later commissioned another mirror, which Kauffman is building. It pays tribute to the Marine Corps.

“I don’t have the words to describe how good it is,” Connolly said of Kauffman’s work. “He has a lot of attention to detail, and he’s a perfectionist in his craft. I don’t mind paying good money for good workmanship and good materials. Anybody interested in period furniture from the 18th century, Justin is the guy to see. I don’t think there’s anything he can’t make out of wood.”

“Everything I make is built like it would’ve been built back then,” Kauffman said. “The joinery is hand-cut and hand fit. There are dovetail drawers. That ensures their piece will last for as long as these beautiful pieces we admire today have lasted.” 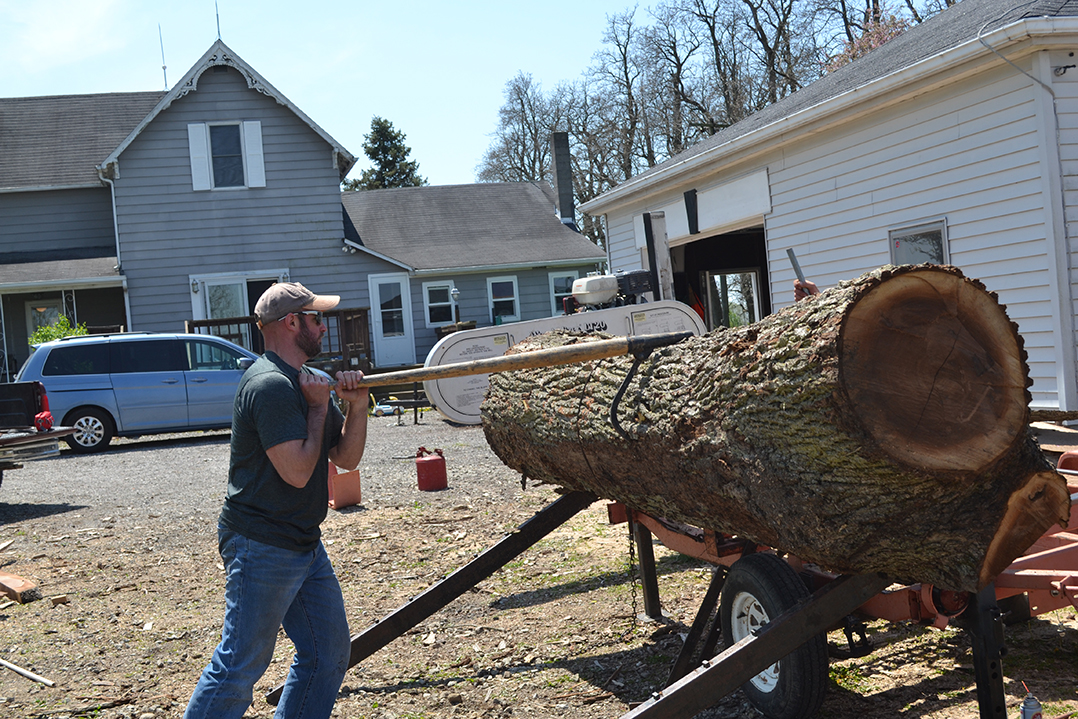 From start to finish

Justin Kauffman many times has a hand in his work from start to finish – such as he even cuts down the trees he uses.

“One reason I harvest my own logs is because I can get the whole log, and that means if I build a large piece of furniture, every piece in that piece of furniture is made out of a board from the same log,” Kauffman said. “So, the color matches, the figure matches. I can get especially wide boards, which are important for me because many pieces I’m building require wide boards. That would be difficult to find in a normal lumber yard.”

Kauffman mostly uses walnut, mahogany, cherry and figured maple. He loads the felled tree on trailer and takes it to a sawmill.
“I’m there when the sawyer is cutting,” he said. “I’m examining the log as the blade passes through it and say, ‘Oh, we need to turn it,’ or, ‘I want it this thickness.’ It’s very customized because I know what the end product will be.”

Sometimes, Kauffman air dries the lumber, which takes a year per inch of thickness. Specifically, he gets better results with walnut and cherry — per color and easier workability — when air dried.

If Kauffman wants to use mahogany or tiger maple, he must travel to a lumber yard in north central Pennsylvania because those species don’t grow in the Midwest.

All of Kauffman’s furniture is finished with a hand-rubbed finish.