When Latasha Tiffault moved to Westfield from Pennsylvania seven years ago, she did what many new residents do. She looked for a new church home, a new doctor, a hair stylist and other places to connect as she settled into her new hometown. But she found it wasn’t always easy to make connections with other African American women.

“I wanted a place or group I could go for information and connect with women who look like me. Not just for myself but for my family,” Tiffault said. “Especially (with) having an 11-year-old (stepdaughter) that sometimes doesn’t see a lot of girls like her in her classroom or neighborhood.”

When she couldn’t find such a group, Tiffault decided to start her own. So, in April, African American Women of Indiana was launched on Facebook.

“It’s a place to get and share information about events, businesses, professionals and so many other things,” she said. “It’s also a place to make connections.”

Tiffault invited 10 other African American women to join, and they invited their friends. Tiffault also spread the word at the mall and grocery store.

“I would walk up and right away tell them that I wasn’t selling anything because I didn’t want them to walk away,” she said with a laugh. “Then I asked if could tell them about the Facebook group I had for African American women. I’d tell them a little about me, why I created the group and what it’s for.”

The approach worked. The group began with 10 members and has grown to 654.

One of those members is Elly McNair, a Fishers resident who joined in May. She learned about African American Women of Indiana when Tiffault messaged her to share her vision about the group and encouraged her to join.

“Small-world story, Latasha and I were both part of an Indiana couponing Facebook group about five years ago,” McNair said. “I recognized her last name and realized I used to work with her husband when I lived in Lafayette. I messaged her to confirm, and we’ve been chatting ever since.”

McNair said she is part of the group for several reasons.

“Some days it’s to ask for recommendations, others to share a deal, have a quiet lunch, find an opportunity to do something fun with like-minded ladies, or just scroll and see what everyone is up to,” she said. “I’ve loved being part of this group. It’s helped me to feel part of a community that many times I wondered (if it) existed around here, and it gives me opportunities to laugh with friends.”

And it is that sense of friendship that Tiffault fosters with group members. She’s hosted a variety of events, ranging from brunch at her home to ladies’ nights out to an end-of-summer dinner at her neighborhood clubhouse to volunteering at Gleaners.

“I love to connect people and I love to help people. That is one reason I am here on this planet, period,” Tiffault said. “The one way I can help people is to allow them to network.”

“It’s a great group to go to that allows African American women to meet up, get to know one another and enjoy each other’s company in a drama-free environment,” McNair said. “I’ve loved all the events that I’ve been able to participate in so far.”

Although the group does have members outside of central Indiana, it doesn’t have chapters in other cities.

“I want to keep it statewide, but it would be great to have people in charge in different areas,” Tiffault said. “But I have to get to that point.”

Tiffault’s next step is to create a mentoring program.

“I hope older women like me in the group could maybe mentor some of the younger women, especially those just getting out of college, about life, work, etc.,” she said. “I’m still exploring the idea but it’s something I have mentioned in the group.”

To learn more about the group, email africanamericanwomenofindiana@yahoo.com. 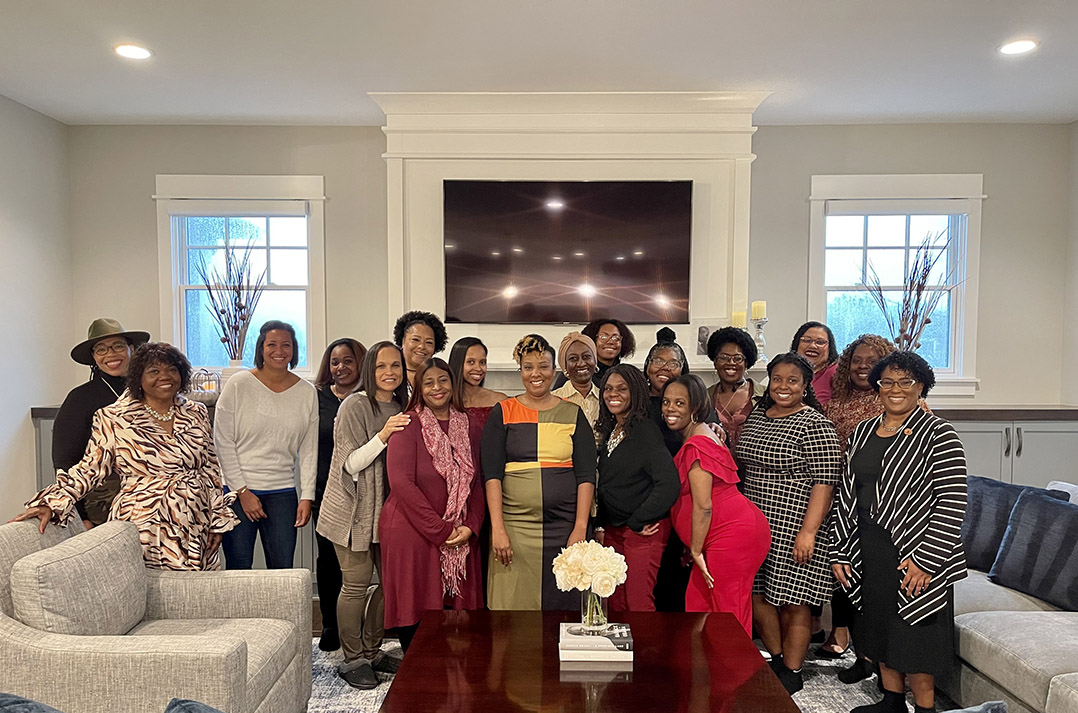 Benefits to being a group member: “You get to meet women that look like you that you might not otherwise meet in the workplace. There are planned events, you can sign up to volunteer with new friends, and if you own a business, there are plenty of opportunities to advertise. We also have a post-weekly that asks for recommendations for a Black-owned business by category. One week might be for a hairstylist or restaurant.”

Thoughts on the group growing to 654 members and counting: “I didn’t know that the group would grow so fast. There are several women in the group who have invited many of their friends. That’s why it continues to grow so much. They really believe in the group. I continue to invite women wherever I go, grocery stores, malls, etc. I ran into one lady in Crate & Barrel several months ago and invited her, and she is active in the group.”

Most memorable gathering/outing to date: “Definitely the end-of-summer dinner. It was to celebrate the beginning of the group, what we have accomplished in the first six months, a way to come together to end the summer and an opportunity for women that live a distance away to take a drive and join us. Everyone had a fabulous time.”

What are you most proud of regarding the group? “I am most proud of feeling like I have created a space for sisterhood for women that are new to the state without any family or friends in the area, ones that felt alone at home or just needed a reason to get out.”

Criteria to join the group: “African American, live anywhere in the state of Indiana and agree to Facebook rules. No fee to join but some events cost to attend.”