You are at:Home»Current in Carmel»Carmel Community»Cornerstone’s senior pastor retires after nearly 3 decades with church

Luther Brunette has watched as his flock has steadily grown the past 28 years. 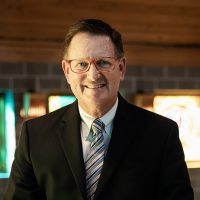 “At the time the congregation or disciples, followers of Jesus, as we call them, was 700,” said Brunette, who has been a pastor for more than 41 years. “Now we are up to 3,500 with the three sites. We’ve been blessed to mirror the growth of our community and just make an impact on people’s lives with the gospel. It’s just been a joy to see. This has been a dream come true, an answer to a prayer. Carmel has been a wonderful community for us to raise our children and to see people’s lives change with the hope and peace of the gospel.”

The church’s name was changed to Cornerstone Lutheran when campuses were added in Fishers and downtown Indianapolis in 2016.

Brunette, 66, was the senior pastor for all three sites.

“I mostly preached at the Carmel site, but I moved around as well to the Fishers and Indianapolis sites,” he said.

There were site pastors at the other campses. Brunette, a Carmel resident, said he believes Cornerstone has done a strong job of preparing for the transition after Brunette announced his retirement plans two years ago.

“Scott Geiger was elected the senior pastor-elect a year ago,” Brunette said. “Normally a congregation will lose 10 percent of its people when a longtime pastor retires. We’re hoping to avoid that by the grace of God. We have a great staff. We have seven full-time pastors at the three sites.”

During the height of the COVID-19 pandemic, all three sites livestreamed services. Now the livestream is only from Carmel.

“We’re trying to get people to come back in person, which has been a challenge,” he said. “God has been good and our offerings have stayed up. We’re starting to get volunteers to help out. Our outreach programs in the city have been a blessing.”