You are at:Home»Current in Zionsville»Zionsville Cover Stories»Clear Software: Local company is acquired by Microsoft

Nine years ago, Jon Gilman was a consultant for Fortune 500 companies. He noted that they were often sold automated software to solve business challenges that routinely fell short of their promise.

“It would bother me that companies would spend that much money and time on something that did the opposite of what it promised,” Gilman said. “So, I started to tinker around to create an automation platform on top of these systems so that they could actually fulfill that original promise.”

Gilman started what would become Clear Software at age 30 while living in Chicago. It was a side project that occupied his time on nights and weekends. He secured his first customer in 2012, and in 2014 his family moved to Zionsville, where his wife, Lyndsay, is from. In 2015, Clear Software became Gilman’s full-time job. Employees were hired. An office was leased in town. And in the last year, Gilman said the company began fielding offers from large technology companies before finalizing the acquisition by Microsoft on Oct. 22.

Gilman declined to reveal what Microsoft offered as compensation for the acquisition. Attempts to reach Microsoft for comment were unsuccesful.

“We were approached by Microsoft earlier this year to talk about a partnership, and the more we talked about working together, the more we realized an acquisition was probably a better option,” Gilman said. “It had a lot to do with what is going on in our market right now in our space. Within the automation industry, everyone is getting gobbled up. There have been a ton of acquisitions and mergers, so I think there is a bit of a fear of missing out with a lot of the big tech companies (that) ‘If we don’t get this technology now, then we’re never going to get it because it’s going to get gobbled up.’”

Clear Software officials were in talks with several companies that were interested in acquiring the company, but Microsoft moved first. Gilman said Clear Software will continue to operate out of its Zionsville office at 112 N. 9th St. until its lease expires in January 2023, then the company will move to Microsoft’s Indianapolis location near the Keystone Fashion Mall.

Gilman declined to say how many employees work at Clear Software.

“Back in 2012, I thought I wanted to build this up as big as Microsoft and make it a big software company, but I think along the way what I realized was that it will take decades to do that,” Gilman said. “It has taken all of these companies decades to get to that point, so a better possible outcome I thought of back then was that we get acquired.

“It was either become big and (have an initial public offering) or get acquired, so we achieved one of the two positive outcomes.”

A Zionsville resident, Gilman said the Microsoft acquisition will allow him to spend more time with and “be more mentally present” with his wife and their three children: Emerson, Lenore and Graham. 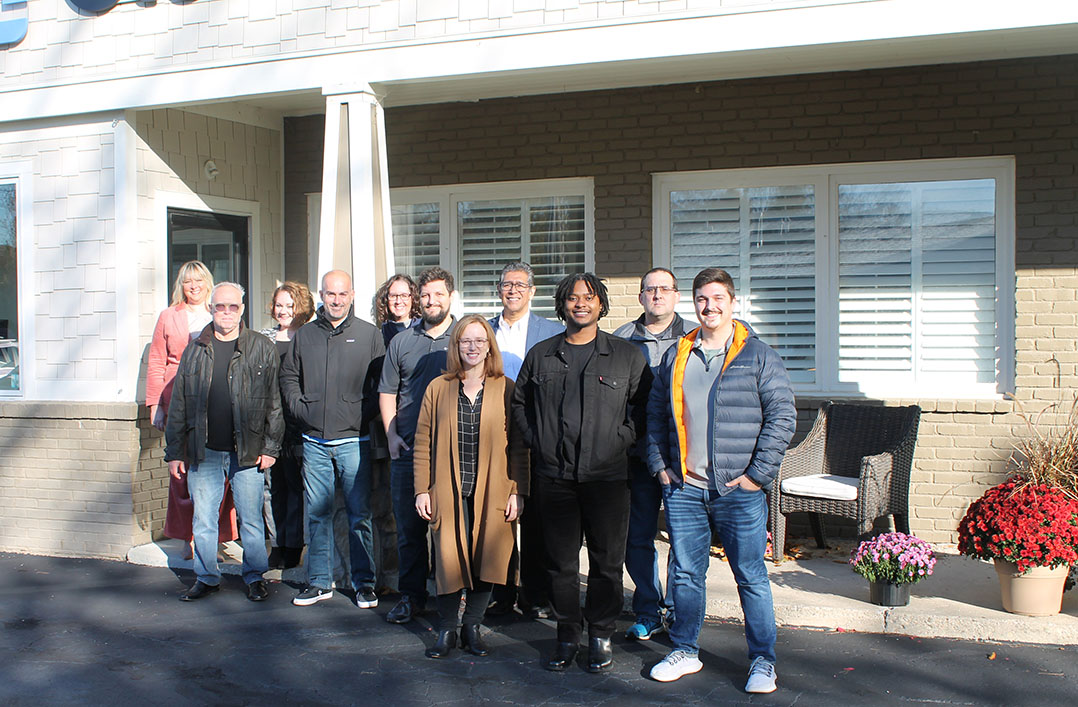 Clear Software and Zionsville Chamber of Commerce employees pause outside their office.

After moving to Zionsville in 2014, Gilman began working out of zWORKS, a coworking space in town. There, Gilman met most of the company’s largest investors.

Between the venture capitalist firms Gilman met at zWORKS and some of the wealthier individuals in Zionsville that he met through zWORKS, he estimates $6 million of the $7 million the company raised in its early days came in some way from connections made through zWORKS.

“When we learn that one of our startups has been acquired or had great success in their own way, it’s continued validation of why we are here and exist in Zionsville,” zWORKS Executive Director Vickie Hall stated in an email. “Our mission and vision has played out. It gives us satisfaction and a happy heart that we are fulfilling a need in our community and providing the roots for businesses to thrive here.”

But Gilman said other local organizations, including the Town of Zionsville, the Zionsville Chamber of Commerce and individual Zionsville residents, were instrumental in the company’s success.

Clear Software offers a business automation and integration platform with strong connectivity into SAP and Oracle, the two most used enterprise, resource and planning softwares. The company will now work with Microsoft’s development and product teams to integrate its product into Microsoft’s Power Platform.

“Microsoft’s Power Platform has a number of different products that allow big companies to automate business processes to create really cool dashboards and reports that give them a pulse on how the business is doing and tools that allow them to mine their data to find out where they are adding customers, experience issues or internal business processes issues,” Gilman said. “All these tools are great. The problem is, they have really no connectivity into the system that these customers actually use. These large enterprises mainly run on SAP and Oracle for a lot of their core business and accounting processes, and Microsoft doesn’t have connectivity into those systems. And that’s where we specialize.”

“Organizations depend on their business applications to work seamlessly across many different systems and data stores,” Microsoft General Manager/Power Automate Stephen Siciliano stated in the company’s Power Platform Blog. “Customers need to know that their most critical business processes are built to optimize working across those systems and data sets no matter how complex the process becomes.”

Gilman will become the acquired product planner within Microsoft, but he said the product does not yet have a name. Whether it will be a standalone product or bundled with other Microsoft products is unknown.

“There’s a lot of unknown right now, and what we need to do is sit all of the other Microsoft product owners in a room and figure it out,” Gilman said.