You are at:Home»Current in Carmel»Carmel Education»Carmel Fire Dept. places bleeding control kits in every classroom in city

Carmel firefighters respond to calls for help as fast as they can, but every minute can make a big difference in the outcome of an emergency.

That’s why the Carmel Fire Dept. has proactively placed bleeding control kits in more than 2,000 locations throughout the city, including every public and private school classroom, school buses, City of Carmel buildings and vehicles, churches and other facilities. 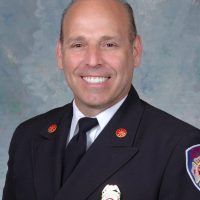 “This is the most comprehensive program that we are aware of in the U.S., (and we are) super proud of it,” CFD Chief David Haboush said at the Nov. 1 Carmel City Council meeting, where he and other firefighters officially announced the program.

Each kit contains a tourniquet and other supplies needed to stop bleeding after a severe  injury. This is crucial because an injury victim can bleed to death in less than five minutes, quicker than CFD’s average response target time.

“We turn a bystander into a first responder, that’s what we do with this program,” Haboush said.

CFD put together its own kits for $26 each, leading to a savings of 50 percent or more compared to similar kits supplied through other programs, according to CFD EMS Division Chief Jon Alverson. CFD is providing the kits at no cost to nonprofits.

Each kit has a QR code that leads to a 30-second training video on how to use the contents. It also includes a simple set of printed instructions to use for those without a smartphone readily available.

David Woodward, director of student services at Carmel Clay Schools, said he is thankful to CFD for providing the lifesaving tool throughout the district.

“Bleeding control kits are often mischaracterized as only necessary after an act of great violence, but they can be valuable after any incident where bleeding is an issue,” Woodward said.