Hutcherson is a native of Youngstown, Ohio, and settled in Indianapolis after traveling the Midwest opening restaurants for Brinker International, Associate Host and General Mills. 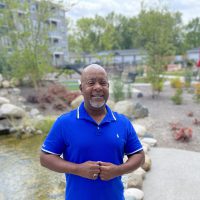 Following his career in the restaurant industry, Hutcherson began work in the cable and communications industry with Time Warner Cable, Bright House Networks and Spectrum Communications as the new market sales representative in Hendricks County and later was promoted to sales supervisor.

Hutcherson is a graduate of the Ohio Institute of Technology and also has a degree in culinary arts from The Chef’s Academy, a division of Harrison College based in Indianapolis.

After leaving his sales career, Hutcherson returned to his first passion, which is food, hospitality and customer service.

Hutcherson said he loves living at Encore 55+ Boutique Apartments in Indianapolis. He moved to Encore after checking out other local apartments and discovered that Encore was the best fit for him.

“I love the energy of the residents, the layout of my apartment and the view of the courtyard,” he said. “The courtyard always has something going on with pickleball courts, bocce ball, the dog park or just my friends relaxing on the patio, but my favorite area is the fitness center. For our size of community, the fitness center is really first class.”

The Encore staff of Jeanne Milan, Mark McClelland and Valerie Wenstrup played an important role in making his decision to move into Encore, especially during the COVID-19 pandemic. “I didn’t want to wait any longer to move,” Hutcherson said.

You can often find Hutcherson cooking at the grill and helping to make Encore’s monthly social events fun and entertaining for all the residents.

Hutcherson enjoys living in Indianapolis and his hobbies include vegetable gardening, exercising and cooking, and he loves all kinds of sports. He is a big fan of Ohio State sports and the Cleveland Browns, but he is an Indianapolis Colts and Indiana Pacers fan as well.

Hutcherson is the proud father of two adult children: his son, Ty, a mortgage banker in Arizona, and his daughter, Mikhayla, a registered nurse in Illinois.