“SERT serves as an added safety measure inside the jail, just as SWAT operates for law enforcement,” said Matt Hyde, SERT commander. “In corrections, we are not immune to the dangers humans can do to others, the exposure to harmful drugs, handmade weapons, fights and hostage taking. It is not uncommon for a facility to have a tactical response team to handle such unusual occurrences.” 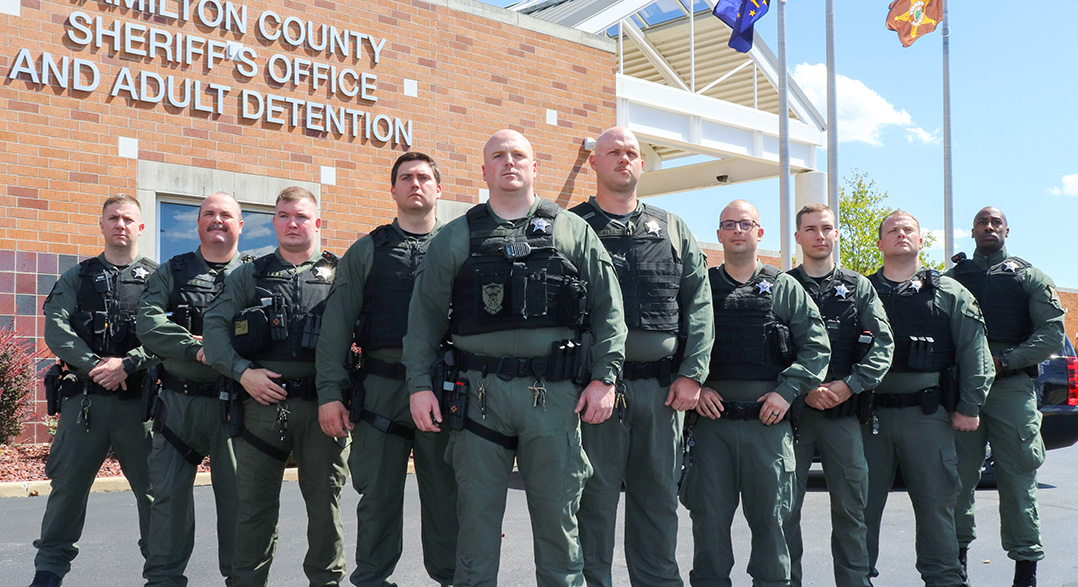 “Over time, the team began taking on cell block shakedowns once a month, which involves the team searching every inch of a single cell block, including each cell,” Carey said. “We search for weapons, drugs, intel, gang affiliations as well as any security risk or maintenance issue. The team then expanded to high-risk, high-profile inmate transports, transporting very high-risk inmates to prison or court.

“High-risk, high-profile inmates can include high-ranking gang members, inmates who are escape risks, inmates with a lot of media coverage, etc.”

That led to the team taking on high-risk, high-profile courtroom security. The team also trains in custody/hostage rescue. In 2020, Hamilton County Sheriff Dennis Quakenbush tasked SERT with starting and leading the Sheriff’s Office’s first Mobile Field Force Team, which is tasked with handling large crowds and riot operations within the county.

A selection process is conducted once a year. To be invited, candidates must have worked one year from their Field Training sign-off date and receive a letter of recommendation. The selection process includes a basic physical training assessment, a written test and a formal interview with team leadership.

All SERT members work regular 12-hour shifts. The team of 15 is split into two smaller teams. Each team has a team leader and one commander and is on call throughout the year to ensure quick response time.

The SERT also trains other jail officers. It conducted its first academy in 2005. Since the first class, hundreds of jail officers have been trained by Hamilton County SERT.

“Some of the officers were on established teams, and a few others were working on starting a team,” Carey said. “The course is open to patrol and corrections officers, even if they are not a team. We have trained with teams from Madison, Tipton, Hendricks, Morgan and Johnson counties. It is common for facilities to have some sort of tactical team within the facility due to the dangers.”

A few examples of recent SERT responses include: