The City of Carmel and Lauth Group on Oct. 27 released renderings and new details of a public/private partnership to build a $47 million mixed-use development on the northeast corner of Range Line Road and Main Street in the heart of the Arts & Design District. 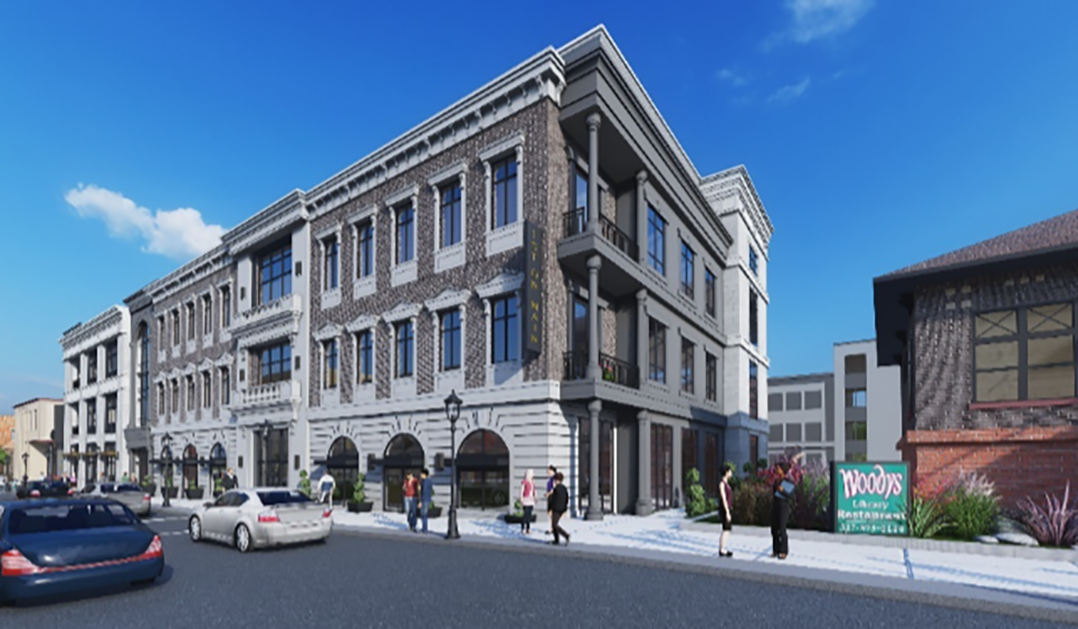 1st On Main, formerly known as Lot One, will include a four-story office building with first-floor restaurant space and a private rooftop terrace, eight luxury condominiums, 35 luxury apartment units, a 310-space parking garage with public access and a community gathering plaza featuring the existing Rotary Clock. Construction is expected to be complete by summer 2023.

“1st On Main will fulfill demand for Carmel office space in this area and provide residents with access to for sale/for rent housing in the heart of Carmel’s Arts and Design District,” stated Michael Garvey, Lauth’s chief investment officer and partner. “The community gathering plaza will be home to the historic Rotary Clock and will create an inviting destination space. Plans also call for a restaurant with outdoor seating overlooking the plaza. Each building within the development incorporates outdoor activation features including planters, benches, outdoor furniture, patios, festive lighting and balconies. We envision this being a hub of activity for the residents of Carmel and the many visitors who take part in the variety of events hosted each year.”

Carmel Redevelopment Commission Director Henry Mestetsky said the new name of the development pays homage to the site being the first parcel in Carmel and highlights its location along Main Street. 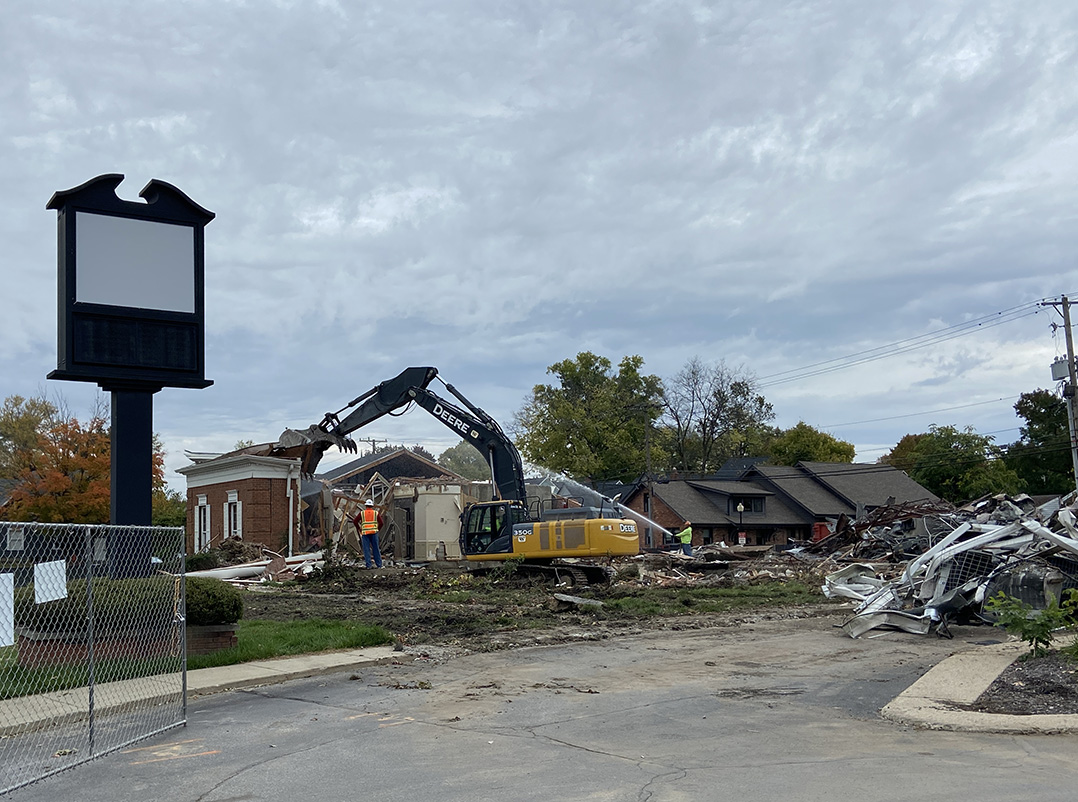 Site work, which includes demolishing the former PNC Bank branch building, is under way. PNC Bank will provide a 24-hour ATM inside the future office building lobby. Other tenants have not been announced, but Mestetsky said the project is expected to attract businesses that bring “high-paying headquarter jobs.”

In the spring of 2019, the city released renderings of redevelopment projects for the site submitted by eight developers. At the time, city officials expected the project to break ground in 2020. However, the city decided not to go with any of the submitted options and decided to partner with Carmel-based Lauth — one of the eight developers to submit a proposal — to move forward.

After partnering with Lauth, the city described the project as including a three-story office building, four condos, 70 apartments and a 325-space garage. Mestetsky said it’s not unusual for projects to change during the conceptual stage.

“The Carmel Redevelopment Commission’s partnership with Lauth to convert a parking lot and some older buildings on one of our main corners of the city into a beautiful, landmark project compete with headquarters jobs, plenty of public parking, and for-sale and for-lease residential units will have a transformational effect on the district,” Brainard stated. 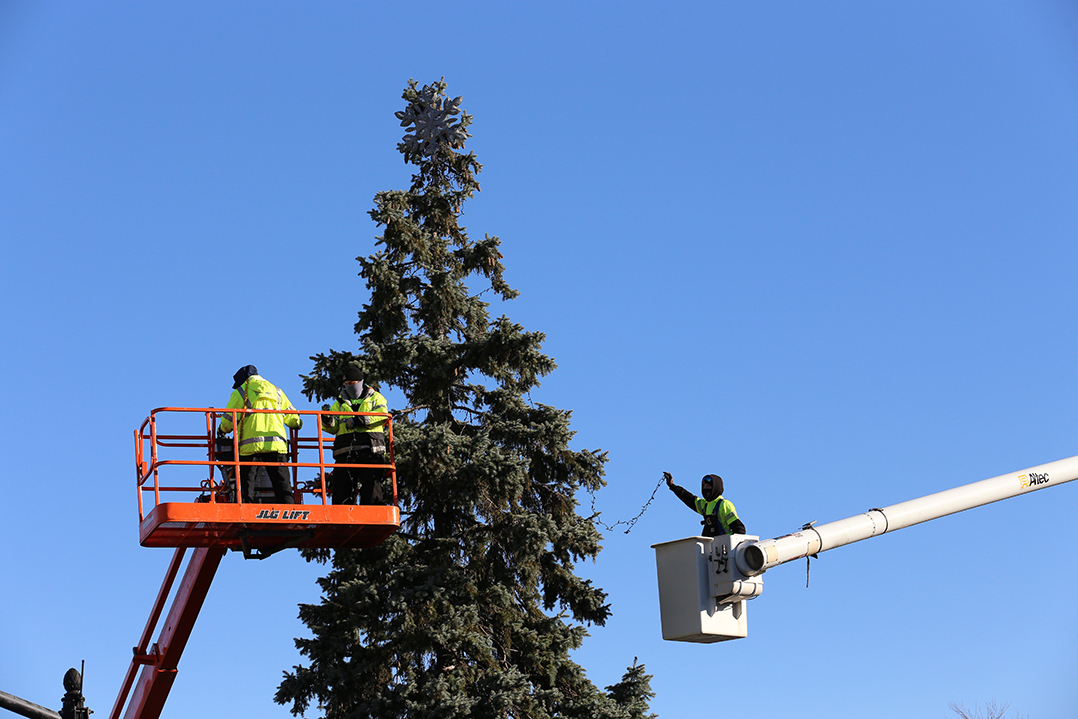 A crew from the Carmel Street Dept. wraps light around a tree on the northeast corner of Range Line Road and Main Street. (Photo by Ann Marie Shambaugh)

One casualty of the 1st On Main redevelopment project is a towering evergreen tree on the corner of Main Street and Range Line Road that is elaborately decorated each year for the holiday season.

The tree will be decorated this year but will be removed as the project progresses.

“While the city takes urban forestry seriously and plants about 650 new large shade trees every year, Lauth has multiple utility lines being relocated under the future open plaza on the corner of 1st On Main,” said Henry Mestetsky, director of the Carmel Redevelopment Commission. 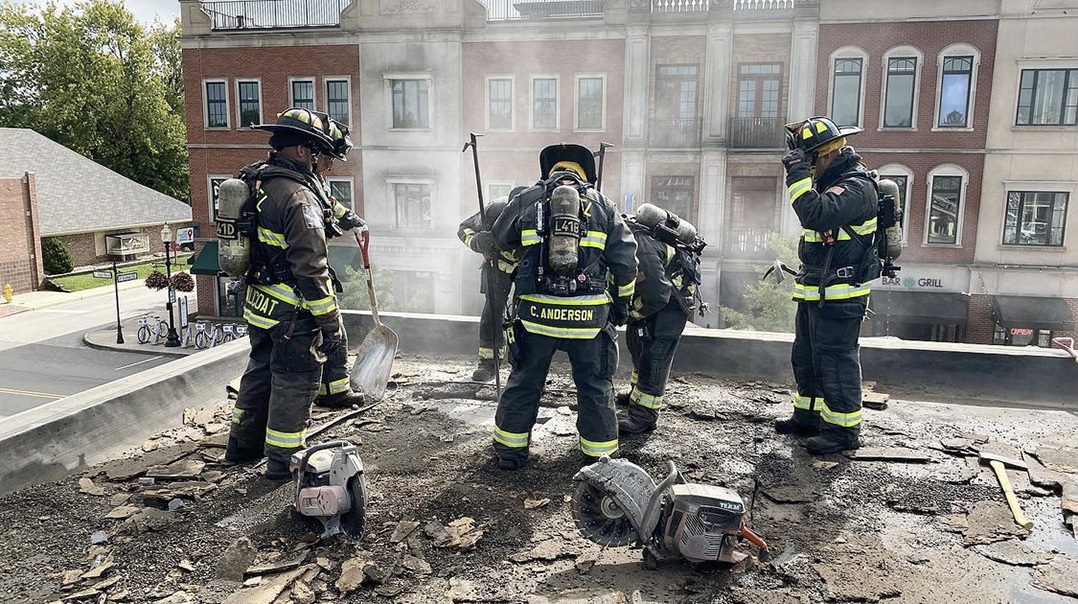 Before demolition began on the former PNC Bank building, it provided one last service to the community.

The Carmel Fire Dept. used the three-story building to train in a real-life situation. Firefighters were able to practice forcing open different types of doors, advance hose lines up multiple flights of stairs and rescue mock victims from a variety of situations.

“We have great training grounds, but you can never mimic the real thing like using the real thing,” CFD firefighter Tim Griffin said. “In the real setting it gives you an opportunity to think outside the box when life safety isn’t at hand.”