Discovering Broadway founder Joel Kirk recently wrapped up the nonprofit’s first season with another project he is passionate about.

Discovering Broadway held a writers’ retreat and concert for his musical “Hamlet” in August. 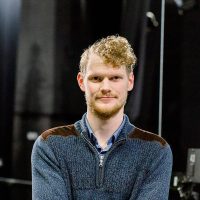 There are 13 writers on the musical he is creating.

“I wanted to create a musical where each character had a unique voice,” Kirk said. “The characters in ‘Hamlet’ are so distinct that you can identify characters they inspired in modern stories. It was exciting to imagine each character’s style and partner that with a songwriter perfect for that vibe.”

Kirk, a 2012 Carmel High School graduate, said he chose to assign songs, especially duets and group numbers, to the author of the character driving the action of the scene.

“Cody and Gary Fry, who are writing ‘Hamlet’s’ music, penned the song ‘I Don’t Know You,’ which captures the confrontation between Hamlet and Gertrude,” Kirk said. “In the scene, Hamlet bursts into his mother’s chambers and accuses her of misdeeds. The energy of the song needed to flow from Hamlet’s emotion. As a bookwriter, I am having the time of my life. A seminal Shakespeare play, brilliant songwriters and a vision I am passionate about, it doesn’t get better than this.”

The week in August was just another step in the process. Kirk said they are weeks away from a full draft.

“We will make adjustments to improve the meaningfulness and clarity of the story. In two months, we will hear the show again after more work sessions,” he said. “Later this fall, we will hear actors sing through the entire score and start preparing for a concept album. The musical needs to earn each next development step through faithfulness to the story and our collective hard work. We are having a blast.”