You are at:Home»Current in Zionsville»Zionsville Cover Stories»Worker shortage: Factors that led to businesses’ struggle

Correction: The first mention of Allyson Gutwein’s last name was misspelled in a previous version of this story.

Jarred Meeks contributed to this story

Matt Frey has managed to keep his Bub’s Burgers & Ice Cream restaurants in business throughout the COVID-19 pandemic, including through the sudden ban on in-person dining in the spring of 2020 and the uncertainty that followed. But now another crisis has emerged: Frey can’t keep his restaurants fully staffed. And neither can many other businesses.

Because of the worker shortage, Bub’s has had to change its model from full service to counter service at multiple locations. And even to do that, Frey and his wife are working the lunch shift in Zionsville to keep the restaurant open, taking orders and seating long lines of customers.

“I don’t want to change our process, but I’m seriously analyzing it right now,” Frey said. “We might have to change all the Bub’s to counter service.”

While the pandemic hasn’t helped, Frey doesn’t view it as the source of the problem. Bub’s relies heavily on high school student workers, and Frey said he began to have more difficulty recruiting them even before the pandemic began.

“(Finding) youth labor has been hard for quite some time, pre-pandemic,” Tamm said. “Some of it is that kids are busier, and they have other obligations.”

Kathryn Fryburg, a Carmel resident and junior at Park Tudor High School, said she’s held jobs in the summer but has chosen not to work during the school year so she can focus on preparing for college. She said a majority of her friends have made the same choice.

The pandemic has added pressure to the college application process, Fryburg said, as many internship opportunities have vanished, academic competitions have been canceled or gone virtual and, with the submission of standardized test scores becoming optional to apply to many schools, students have to find other ways to set themselves apart.

“It’s harder to do what you need, not only to enhance yourself as a student academically but to prepare yourself for college,” said Fryburg, adding that she probably would have chosen not to work during her junior year regardless of the pandemic.

The pandemic can be blamed for the loss of younger workers in other ways, as well. Like older workers, many students left the restaurant industry early in the pandemic when a ban on indoor dining led to the loss of 215,000 restaurant jobs in 24 hours in Indiana, Tamm said.

“Many of those folks don’t have six days’ worth of savings, let alone six months,” Tamm said. “They went to find other employment elsewhere. A lot of skills that you have in the hospitality industry are highly desirable in others.”

Tamm, a Westfield resident, said many of the younger, nonmanagement employees went to work for logistics companies, warehouses and call centers, which are less likely to be as severely affected by a pandemic as restaurants.

It’s difficult to know when the youth labor shortage will end or if some of its forced changes are here to stay, Tamm said.

For Frey, the impacts continue. He recently announced that most Bub’s locations will be closed on Tuesdays to give his remaining employees a guaranteed day off.

“We have to give the people who are working seven days, our managers, a break,” Frey said. “We’re fearful of turnover with our full-timers, because they’re getting pushed so hard.” 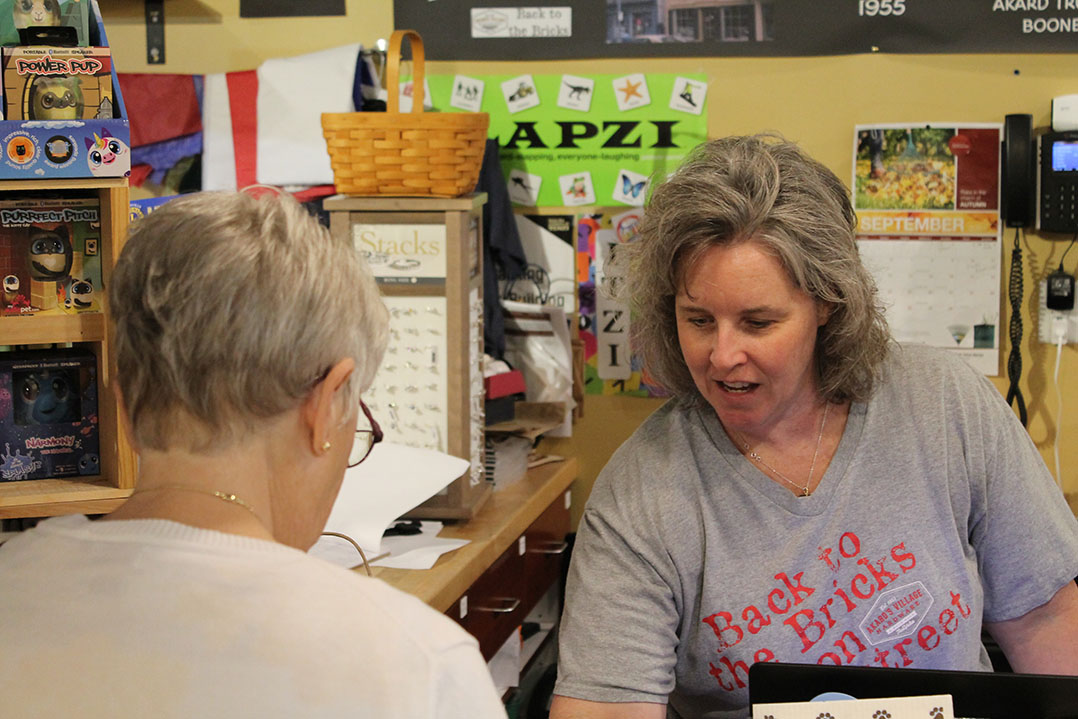 Leigh Ann Akard assists a customer at Back to the Bricks. (Photo by Jarred Meeks)

Other factors changing the labor market

Allyson Gutwein, executive director of the Zionsville Chamber of Commerce, said myriad causes are behind the recent shortage of workers.

“Everyone is talking about the unemployment checks that have gone out, and that is a component, but that is not the only factor,” Gutwein said. “If you look at a number of people, especially workers who were deemed unessential during the pandemic, how many of them have gone back and retooled what they are doing as far as a career? There’s a number of people who have decided that they are going to be essential workers in the future and have now changed career paths.”

According to research conducted by Prudential, a global insurance company, nearly 48 percent of Americans are “rethinking the type of job they want.”

“For those who are looking for jobs, it really is a job-seeker’s market,” Gutwein said. “They have a lot to choose from, and one of the biggest factors in choosing where to work is how much you are going to get paid. For those people who are looking for a new job, they really are able to set their own pay schedule to a certain degree, where they would not have been able to in the past, and that’s across all industries.”

Leigh Ann Akard, who co-owns Akard True Value Hardware and Back to the Bricks in Zionsville, said hourly wages are becoming a point of competition for businesses that rely on part-time workers or younger workers because of the decreased supply of workers and businesses’ increased demand for them.

“They are pushing starting wages so high,” said Akard, citing businesses that offer $15 an hour for what are many workers’ first jobs. “I mean, for somebody’s first job, for a kid for their first job to start out at that, I don’t know how we will be able to sustain those types of wages.”

Gutwein also said many seniors working part-time jobs were forced to choose between their health and their decision to stay in the workforce because of the pandemic.