The Boone County Commissioners and Boone County Council have been unable to agree on how to finance a proposed justice center, creating what one commissioner has called a transparency issue.

Boone County officials have proposed a justice center project that would expand the county jail and possibly create a separate facility at a later date. A recent jail feasibility study supported the addition of approximately 200 cells at the jail to meet the needs of the county’s growing population and an increase in crimes resulting in incarceration. Boone County Sheriff Mike Nielsen has affirmed the county jail needs more space, but he wants to use the proposed expansion of the county’s existing jail not only to add cells but to rehabilitate inmates, reduce recidivism and increase county offerings.

“That’s one of the misconceptions. We are not building a new jail,” Nielsen said during an Aug. 5 town hall meeting. “It’s bigger than that.”

The county commissioners and several county councilors have voiced support for the project, but they have not agreed on how to finance it. The council has yet to hold a first reading of a resolution to approve the project or a public presentation, citing a concern of approving the project before its scope is established.

“We are wanting to move this project forward as quickly as possible,” Wolfe said during the town hall meeting.

Wolfe said the commissioners were targeting an Oct. 1 deadline to approve the project to take advantage of the low interest rates. He also said state law would prevent the project from moving forward until next year if it is not approved by the council by the deadline. The Boone County Council is scheduled to meet on the second Tuesday of each month. Because the council did not vote to have a first reading of a resolution of the proposed project, it is unclear whether the project would be approved before the October deadline.

“We need to move ahead quickly and meet the deadlines that we’ve laid out,” Wolfe said. “We would ask you, as Elise has asked for more time, I’m going to ask you to ask your county council to make this happen at the time it needs to happen.”

Because the council has not held a first reading or heard a presentation, the project would be funded through additional local income tax dollars. The council has not had a public conversation with the commissioners about the project despite private conversations being held for months. Tom Santelli, president of the Board of Boone County Commissioners, said the county has a “transparency” issue.

“The real issue is that (the commissioners) have been trying to get this on the agenda not for a vote but a full, public discussion with the council, and I think that’s of imminent importance for transparency,” Santelli said. “Every council member has agreed we need to do this, and there is some disagreement on timing. We want to be able to present that in a public meeting, and twice it has been taken off the agenda, and that takes transparency away from the electorate, in my opinion.”

During its Aug. 10 meeting, the council voted not to have a first reading of a resolution for a proposed county justice center project.

Santelli said a first reading would have allowed the commissioners to present information about the project and have a dialogue with the council in a public setting. He said the council’s unwillingness to hear a presentation or have a public dialogue was “befuddling.” He also said the commissioners, Nielsen, commission attorney Bob Clutter, council member Keven Van Horn and Hostetter held an Aug. 5 town hall where information about the proposed project was shared with the public instead of during a county council meeting, which he believes is of paramount importance so that constituents can hear the two parties voice their arguments and concerns and a public dialogue can be held.

The council is charged with approving funding for the project, and the majority of council members have signaled they are wary of the cost, which the commissioners believe they can achieve with an amount of $45 million or less, without knowing the project’s full scope. If approved, the project would equate to a 0.02 percent increase in the county’s local income tax, all of which would be used to pay for the justice center and its operation expenses.

Boone County Council President Elise Nieshalla said the county jail needs “refurbishing and some expansion” but that the council must be sure of the project’s scope before approving it.

“Indiana statutes require the council to conduct an investigation on the need for the structure, not just the project,” Nieshalla stated. “We are currently working through that process. I hold my obligation to the taxpayers of Boone County seriously, and I need to be able to say that we are acting in the best interests of the county in whatever determination is made. We can only do that if we have truly done our due diligence.” 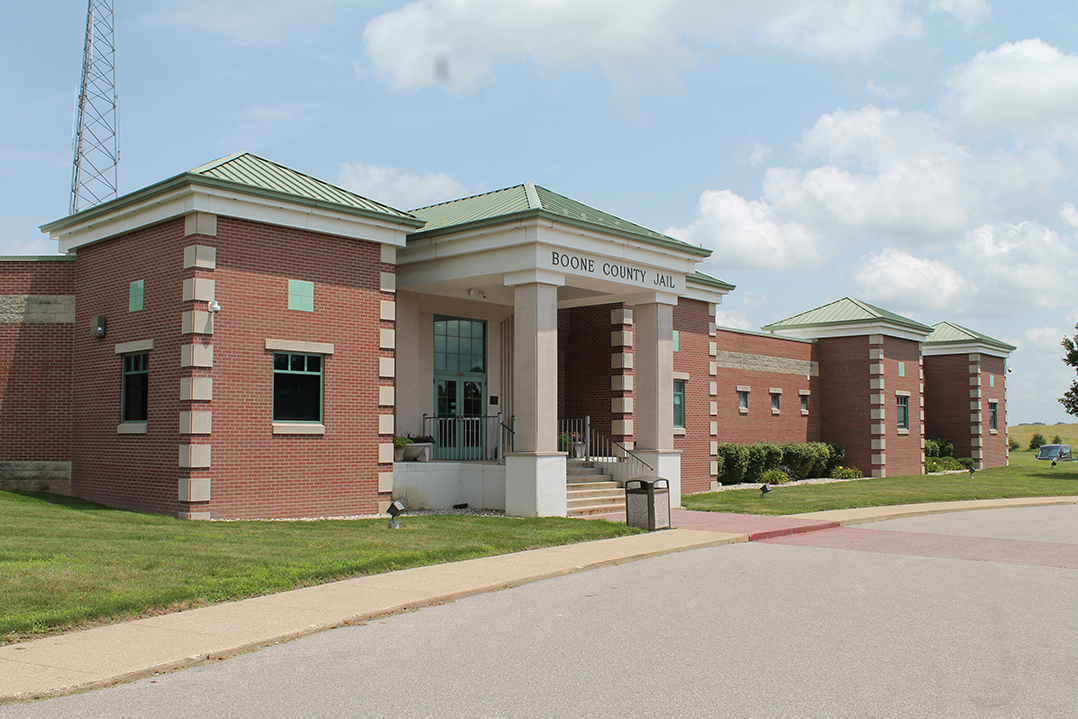 Boone County officials are considering an expansion of the county jail. (File photo)

The Boone County Jail was built in 1990 and opened in 1992. The proposed expansion will be defined through a scoping phase and could see multiple county departments moved to the justice center, including the community corrections and probation departments. That would free up space at the county-owned Key Bank building in Lebanon for other departments, such as the prosecutor’s office, which Boone County Prosecutor Kent Eastwood said is in need of additional space so that additional facilities do not have to be built.