You are at:Home»Current in Geist»Geist Cover Stories»Huddle up: Mount Vernon football program aims to build upon recent success with new head coach

Last year, the Mount Vernon High School football team won 12 games, the most wins in a single season in program history. The team goals for 2021 are high, but if the Marauders are to build on last season’s success, they’ll do it with a new man leading the program.

“I’m not going to be Coach Kirschner, but there are a lot of things that he put in place here that he had during his time at Ben Davis that were similar to what we had at Hamilton Southeastern,” Lidy said. “We know what worked. The things that have worked we’ve kept on and we are building on.”

Lidy, 44, came to Class 4A Mount Vernon in 2018 after leaving Hamilton Southeastern High School to join Kirschner as the Marauders’ defensive coordinator. He has long been a Fortville resident with his wife, Shelley, and two children, Max and Mallory, who are in seventh and second grade, respectively, in Mt. Vernon schools.

During Lidy’s time at Mount Vernon, the football participation numbers have grown significantly, rising from 71 in 2017 to 115 this year.

“I’m out of helmets,” he said. “I’ve got helmets out somewhere in the delivery world.”

Lidy’s got a unique task ahead of him. He’s inheriting a team that is coming off its best three-year stretch in program history, with 30 wins, two sectional titles and a semistate appearance in 2020. The senior class needs at least five wins this season to top the class of 2021 for the most wins in team history during a four-year period.

If someone can keep building upon that foundation, Kirschner believes his successor has the qualities to do it.

“We spent three years together, three really good years, and he’s really intense. He’s got a passion for the game, he’s got a passion for kids and he was fun to work with because he was always thinking about the game,” Kirschner said. “Sometimes you see coaches who don’t think outside the box, but he definitely does.”

Lidy also has the pedigree.

A Newburgh, Ind., native, Lidy is the son of a football coach, John Lidy. John Lidy guided Castle High School to two state championships. Vince played for his dad as a quarterback and linebacker, and the pair won the second of John’s state championships during Vince’s senior season in 1994.

Lidy overlapped briefly with Antwaan Randle-El on the Indiana University football team. In college, he helped out at Bloomington South High School, which was coached by a future Indiana Football Hall of Famer, Mo Moriarty, and quarterbacked by future Indiana Mr. Football Rex Grossman.

After graduating from college, Lidy was an assistant for most of the 2000s at Hamilton Southeastern, seeing the Royals win three sectional titles and playing for the state championship in 2005.

Lidy thought he was ready for the Mount Vernon job when it came open at the end of 2017, so he applied.

“I had a buddy. We’re on Christmas break and he said, ‘You’re not getting this job.’ And I’m like, ‘How do you know?’” Lidy said. “He told me Coach Kirschner was going to get the job. I thought, ‘Well, they can’t go wrong there.’ He was just coming off his state championship run at Ben Davis.”

Kirschner recalls his first task when he got the position in 2017.

“When I got the job, the first thing I did was call (Lidy) to see if he’d be interested in coming on,” Kirschner said. “He wanted to be an offensive coordinator. I got to meet with him at Cracker Barrel at 21st and Post. He was all over the place. He was ready to jump out of his seat. He was talking about how to do this or that. I told my wife later he’s not an offensive coordinator, he’s a defensive coordinator. Defensive guys have this level of energy. They can’t finish their thoughts half the time because they’re (thinking multiple steps ahead). I just loved his energy.”

That energy, combined with Kirschner’s experience, turned Mount Vernon into a Class 4A threat. They created a zero-block weight room program, which has athletes coming into school to lift weights together. Lidy plans to players accountable for their actions both on the football field and in the classroom.

If the Marauders stay focused in the classroom and on the field, Lidy believes they will play fast and aggressive. Maybe, if all the pieces line up, Mount Vernon can reach more win milestones. 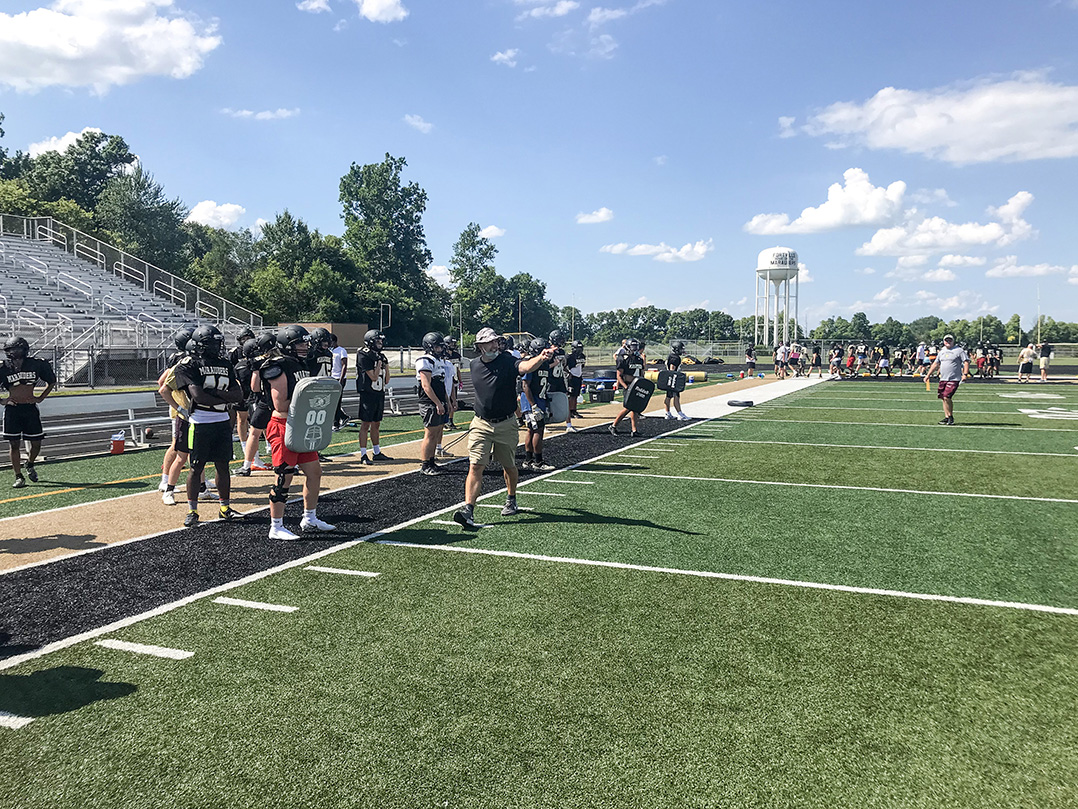 Vince Lidy walks the sidelines during a Marauders practice.

Mike Kirschner came to Mt. Vernon High School in 2018, one year removed from winning a state title at Class 6A Ben Davis High School. During his three seasons, the Marauders won 30 games, but when the Warren Central job came open, he opted to apply for the school where he began his coaching career in the 1980s.

In short, Kirschner found the challenge to coach at Warren Central irresistible.

“We had to put a big staff together. We had to rebuild the weight room. We hired a new strength coach. He’s been fantastic. He was an assistant strength coach at Purdue. We were fighting a pandemic. We weren’t even in school full time,” Kirschner said. “When you coach in 6A football, it’s just different. Not that 4A is bad, 4A is really good. But 6A’s a different breed. We’ll give it our best.”