You are at:Home»Lifestyle»55 and Better»Residents find love at Marquette Manor

Midge Decker and Hal Schimmelpfennig weren’t looking for love, but the couple found it at Marquette Manor.

Schimmelpfennig, who has lived at Marquette Manor for five years, retired from Eli Lilly in 1987, working in the international management division. 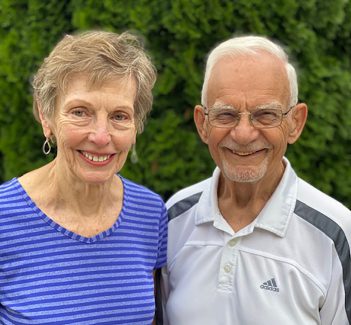 Schimmelpfennig, 89, lived in Iowa before Lilly moved him to the Indianapolis area in 1980. Decker moved from Huntington to Marquette Manor three years ago. Both of their spouses had died before moving to Marquette.

“Marquette has a culture of people getting to know each other,” Decker said. “I was invited to sit with him by different people and we got acquainted that way. We started doing things together that Marquette sponsored and went from there. It turned into something wonderful. It’s something I was not looking for when I moved here, but it’s wonderful. It’s made life really great.”

Decker, 78, is a retired pharmacist, so she said that was one thing they had in common.

“We realized how much we were alike and things we liked were so similar. It just really clicked,” she said. “We started playing pickleball together. That’s a new activity. Marquette sponsors a lot of experiences where we go on day trips and meals and things like that. We do a lot of walking and working out together.”

Schimmelpfennig said the community has an outstanding workout room with a variety of equipment.

“We use a lot of different machines but do it at the same time together,” he said.

Decker said the couple loves to travel. Earlier this month, they made their first trip since the COVID-19 pandemic March 2020 shutdown. The visited state parks in the southern part of Indiana and hope to go Europe when international traveling becomes easier.

“We do a lot of dining with friends here,” Schimmelpfennig said. “They have awfully good food.”

Schimmelpfennig and Decker each have two children.

“We each have a child that’s a half-hour to 45 minutes away,” said Schimmelpfennig, who has a daughter in Lebanon and a son in Washington, D.C.

Decker has a son who lives outside Brownsburg and one in the Philadelphia area.