You are at:Home»Current in Carmel»Carmel Community»Pence becomes 2nd former vice president to move to Carmel

For the second time during his time in office, a former vice president of the United States has become a constituent of Carmel Mayor Jim Brainard. 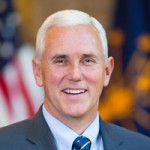 The Pence home is 10,349 square feet and has 7 bedrooms and 7.5 bathrooms. It sits on 5 acres and includes a pond, pool, indoor basketball court, media room and many other amenities. It was listed for $1.8 million. According to documents filed with the Hamilton County recorder’s office, the couple took out a $1.5 million mortgage.

The home has a Zionsville address but falls within Carmel’s city limits.

Brainard said he knows the Pences “fairly well” through state-level politics, arts events and the U.S. Conference of Mayors.

“I was serving as mayor when (Mike Pence) was governor (from 2013 to 2017), so we worked together pretty closely,” Brainard said.

Karen Pence is a watercolor artist, and one of her works — an exterior view of the Palladium — hangs in the Palladium’s Founders Room, a space used for donor receptions and other special events.