You are at:Home»Current in Carmel»Carmel Education»Depth on boys track and field team leads to state title for Carmel High School

The Carmel High School boys track and field team didn’t score a point in the field events at the IHSAA state meet.

In the end, it didn’t matter. The top-ranked Greyhounds used depth in the running events for a comfortable 28-point victory June 4 in the IHSAA state meet at Ben Davis High School in Indianapolis. Carmel scored 68 points, followed by Brownsburg in second with 40 and Center Grove in third with 38.

“The race that sealed it for us was our second guy, senior Jacob Fisher, ran out of his mind and placed third in the 3,200 (meters) and capped it off for us,” Greyhounds coach Ken Browner said. “We figured he scored but we didn’t think he finished that high.”

Carmel sophomore Kole Mathison was second in the 3,200, the meet’s second-to-last race.

The Greyhounds then won the final race, the 1,600-meter relay, one of its two wins. 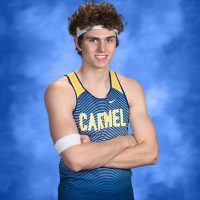 Carmel senior Owen Schafer, who will compete for Purdue next season, was leadoff in the 1,600-meter relay and was joined by sophomore Andrew Willman, senior Thomas Maurer and senior Colton Parker. Schafer won the 400 meters in 48.36 seconds.

“Owen was a starter on the football team but kept his track weight the whole time,” Browner said. “He didn’t put on any weight because he was so serious about being the 400 meters state champion. When he came out for the season, he was ready to roll.”

Parker, who will play football for Miami (Ohio) University next season, was second in the 300-meter hurdles. Carmel was third in the 400 relay and second in the 3,200 relay.

Greyhounds senior Zachary Cox, who will compete for Idaho State, was third in the 110 hurdles.

Having the 2020 season canceled because of the coronavirus pandemic provided motivation, Browner said.

“It really gave us the sense it can be taken away at any time,” Browner said. “Every meet they ran, they ran it truly like it was their last meet. Every meet and every practice was intense. They were just so afraid they would lose the season.”

The state title was Carmel’s fifth in boys track and field. The Greyhounds won three consecutive state titles from 2015-17.

“The seniors taught the younger kids some good work ethic,” Browner said. “Hopefully, it will carry over next year and we’ll be a contender again.”