At 197 years old, the Spring Valley Cemetery in Lawrence is showing its age.

Many of the faces of the oldest tombstones have eroded to the point words are illegible, with some even crumbling. The gates on Post Road are jagged and warped. Many sections of the fence encircling the property are rusted with faded paint.

At least three local organizations are interested in improving the cemetery, but they don’t agree about the best way to do it.

The cemetery is owned and maintained by a private board of trustees, who have deep and familial ties to the site and have been caretakers of the property for more than a century. Their aim is to preserve and honor as much of the cemetery’s history as possible. Recently, on account of the many veterans interred at the site, members of the Historic Fort Benjamin Harrison American Legion Post 510 have become interested in the project. The Legion wants to improve some of the languished areas to honor the veterans buried in the cemetery. The Arts for Lawrence organization also would like to see the site improved and incorporated into the Cultural Campus, just north of the cemetery, which opens to the public on June 18.

“It would be great if the community could all come together and just do a simple cleanup project, but it’s snowballed into a bigger project and it’s been hard to get everyone on the same page,” said Judy Byron, executive director of Arts for Lawrence.

For Spring Valley Cemetery trustee Laura Oberthur Johnson, the cemetery is the final resting place for generations of her family, including a cousin buried there in March.

The board of trustees maintains the property through donations from friends of the cemetery and other people who have ties or interest in the site.

“I have a mailing list, and we send out a request for donations, just a reminder and annual update for those who have been donating for years. Many of the last burials over the last 20 years had been longtime supporters of the cemetery,” Oberthur Johnson said.

Oberthur Johnson is hesitant to disturb historical elements of the cemetery. The rusty fence, seen as a nuisance to some, is for her a significant connection to the past. She said that soldiers stationed at Fort Benjamin Harrison built the fence and painted it as a free service to the community. To her, removing the fence would remove that tangible connection to past preservation efforts. Furthermore, it’s not certain where the boundary of the cemetery is. The rusty fence posts could be over unmarked graves.

‘Compelled’ to clean up

Hal Daniels, past commander of the Historic Fort Benjamin Harrison American Legion Post 510, said he didn’t know the cemetery existed until 2019, when a new owner of a nearby building alerted the post to the military significance of the site.

According to Daniels, Post 510 members suggested replacing the fence along the perimeter and, at a minimum, adding a flag stand for an American flag, a Prisoner of War flag and an Indiana flag.

“Because Post 510 is a part of the City of Lawrence and part of Fort Harrison, we are almost compelled to get in there and make sure this veterans cemetery gets cleaned up and gets the proper look that it needs to have,” Daniels said.

Several compromises between all concerned parties have been considered. For example, both groups would like to see a flag stand added, but they can’t agree on where to place it.

Space for a proposed flag stand is limited. Post Road runs flush against the cemetery on its east side, while another private property occupies its northern border. Woods are on the western border. One spot might be the southern border, but utilities underneath it — and placing it within the fenced area — is problematic because of the possibility of disturbing unmarked gravesites.

“Although you do not see burial stones, there are burials, and you can tell by the uneven ground where they are,” Oberthur Johnson said. “And it also shows the history of the types of burials. What would have held eight burial plots (in the past) now only holds six because we have to have vaults.”

Even with the project stalling, groundwork has been laid to incorporate the cemetery into the Cultural Campus. A new fence has been built south of the cemetery at the edge of a new parking lot, with a gap to eventually become a gateway to the cemetery. The Spring Valley Cemetery also will be included in the augmented and virtual reality app for the Cultural Campus called “Discover Arts for Lawrence.”

“If you go into the app under the virtual side, you can tour the Cultural Campus from anywhere and learn about the history of the buildings on the site and some of the history about the cemetery,” Byron said. 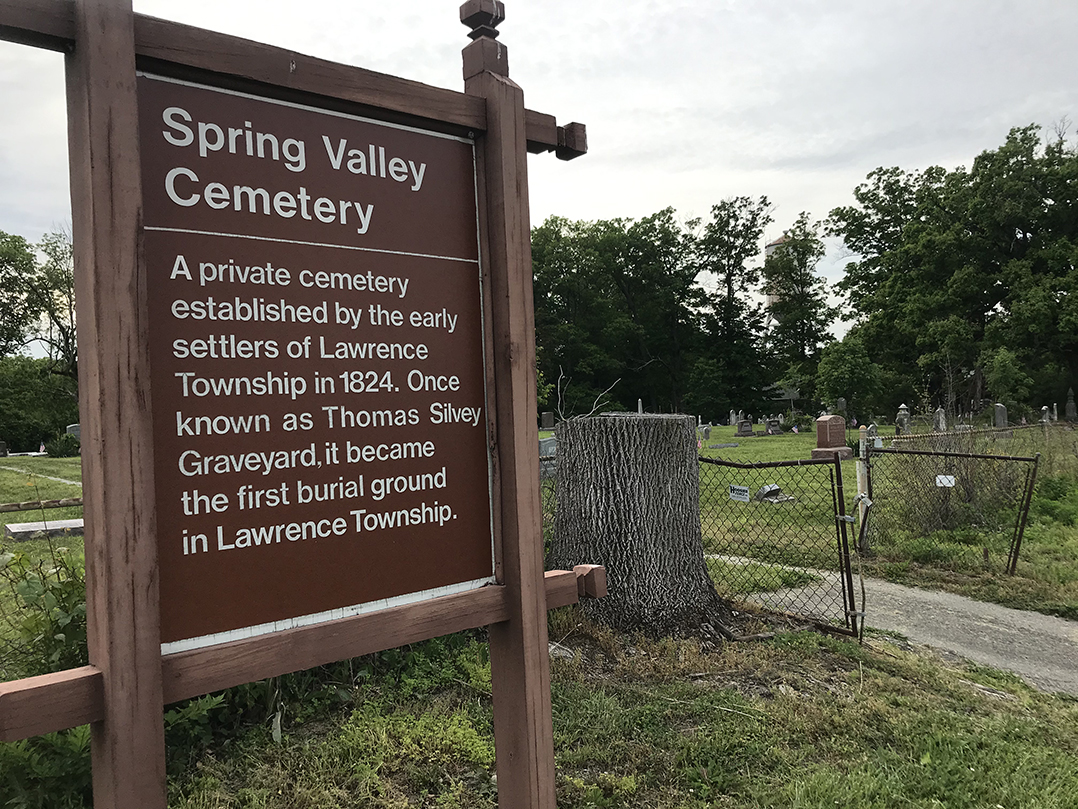 Entrance to the Spring Valley Cemetery on Post Road. It is one of the oldest cemeteries in central Indiana.

Although the Spring Valley Cemetery is closing in on its bicentennial, it is not the oldest in Indiana. Burial sites for various Native American tribes are far more ancient. But as far as areas designated as “public cemeteries,” the oldest is Greenlawn Cemetery near Vincennes, which was founded in 1788 and has more than 10,000 graves.

Spring Valley Cemetery, originally called the Thomas Silvey Cemetery, opened in 1824, the year John Quincy Adams was elected as the sixth president of the U.S. Indiana was in its eighth year of statehood.

Buried at the cemetery are men who served in World War I and World War II and the Civil War. Elisha Reddick, the first settler of Lawrence Township, is buried there, along with his father, William, a Revolutionary War veteran and Irish immigrant. William, who entered the war as a fife player, fought for the American side.