You are at:Home»Current in Carmel»Carmel Community»Memorable run continues with All-Stars for Carmel senior, coach

Life since March has been quite good for recent Carmel High School graduate Brian Waddell.

“These last three months are everything I’ve hoped for since I started playing and watching basketball,” he said. “Winning a state championship, playing in the Indiana All-Star game and getting the opportunity to play at Purdue next season still feels surreal in some ways. Everything really started paying off these last three months.”

Waddell will play for Greyhounds coach Ryan Osborn for three more games as Osborn is coaching the All-Stars. Osborn was named to coach the 2020 team, but those All-Star games were canceled because of the COVID-19 pandemic. 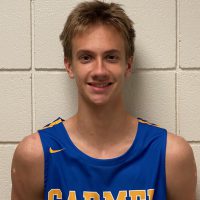 “I’m most looking forward to getting to play on the same team with the best players in the state that I’ve been competing against all year,” Waddell said.

The 6-foot-7 Waddell helped lead the Greyhounds to the Class 4A state championship April 3 with 20 points and 10 rebounds in a 51-46 overtime victory over Lawrence North. Entering the postseason, Waddell had only a few NCAA Division I offers but no high majors. Shortly after the state title game, Purdue coach Matt Painter offered a scholarship.

“I think the last parts of the season had a lot to do with getting the Purdue offer,” Waddell said. “Being able to pull out close games and play well in tough situations is something that every college looks for.”

Osborn said it helped Waddell to show what he could do down the stretch.

“He’s going to be good at Purdue, and I think coach Painter saw all the potential from a basketball player’s standpoint,” he said. “But (he) also sees what kind of person Brian is, and all that fits with the culture he’s built at Purdue”

Osborn said Waddell played with more confidence after returning late in the regular season after missing some action with an ankle injury.

“Every step we went, he upped his game, too,” Osborn said.

Waddell’s father, Matt Waddell, played for Purdue in the 1990s and was a teammate with Painter.

“It’s no question that ever since I was little, I dreamed about playing at Purdue,” Waddell said. “Obviously, my dad playing there in the ’90s had a lot to do with that. We would go to many games when I was young, and the atmosphere was and always has been unbelievable. Growing up, that was always the school I envisioned myself at, and when I had the opportunity to make it a reality, it was almost impossible to pass up.”

Waddell’s CHS teammates, 6-5 guard Pete Suder and 6-10 forward Charlie Williams, were picked for the Junior All-Stars. After the season, Suder discovered he had a stress fracture in his right leg that led to a broken tibia.

“Growing up in Indiana and being a part of Indiana basketball and having the opportunity to coach the All-Star team is something you dream about,” Osborn said. “To have the opportunity to do it with one of our seniors makes it even more special. It’s a special group. There’s a lot of talent. They’re great kids. I think they are going to make the experience a lot of fun.”