You are at:Home»Current in Zionsville»Zionsville Community»Stevens steps down as Celtics coach, promoted to new role

Brad Stevens, who grew up in Zionsville and graduated from Zionsville Community High School, has stepped down as the head coach of the Boston Celtics to become the organization’s president of basketball operations. He replaces Danny Ainge, who is retiring. 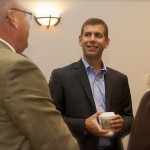 A former Celtics player, Ainge is the only person in the team’s 74-year history to win championships as a player and as a general manager. He announced June 2 that he is retiring from his role as president of basketball operations. Stevens, who has served as the team’s head coach for the last eight seasons, was promoted to the position the same day.

Ainge will continue to work with the team on transition planning through the upcoming off-season, according to a media release. The team began an immediate search for a new head coach.

“Helping guide this organization has been the thrill of a lifetime, and having worked side-by-side with him since he’s been here, I know we couldn’t be in better hands than with Brad guiding the team going forward,” Ainge stated. “I’m grateful to ownership, all of my Celtics colleagues, and the best fans in basketball for being part of the journey.”

Stevens was hired by Ainge in 2013 and has led the team to a 354-282 record, including seven consecutive playoff appearances and three Eastern Conference Finals appearances. The announcements came the day after the Celtics were eliminated in the first round of the playoffs.

Stevens joined the Celtics after coaching Butler University, where he led the Bulldogs to two consecutive runner-up finishes in the NCAA championship game.

“I’m grateful to ownership and to Danny for trusting me with this opportunity,” Stevens stated. “I’m excited to tackle this new role, starting with a wide ranging and comprehensive search for our next head coach. I love the Celtics, and know the great honor and responsibility that comes with this job. I will give it everything I have to help us be in position to consistently compete for championships.”