Christy Altomare arrived in Carmel two days before she had taken the stage to sing songs from “Ever After” in front of an audience.

“They gave me six songs before I got here, and when I got here they cut two songs and added two new songs,” said Altomare, who starred in Broadway’s “Anastasia.” “You’re always flying by the seat of your pants. 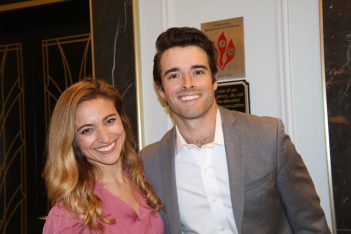 Broadway stars Christy Altomare and Corey Cott performed songs for the roles for “Ever After” May 23 at Feinstein at the Hotel Carmichael. (Photo by Amy Pauszek)

“This team is exceptional. Carmel has treated us like royalty.”

Altomare and fellow Broadway performer Corey Cott arrived near the end of founder Joel Kirk’s Discovering Broadway’s writers’ retreat for the pre-Broadway process of “Ever After.” The two performed songs during two performances May 23 at Feinstein’s at the Hotel Carmichael in Carmel.

Cott and Altomare had previously done separate table readings for “Ever After.”

Altomare and Cott won’t necessarily be cast in “Ever After,” but both would like the opportunity if they were offered the role and weren’t committed to another show.

“If they would ever ask me to do this, in a heartbeat I would say yes,” Altomare said.

“But we’re game for the challenge,” Cott said. “Sometimes you learn new lines and have to put it in that night.”

Producer Kevin McCollum said the Discovering Broadway event at Feinstein’s was like a TED Talk with music.

“I’m a music person. I just need a quiet space and a keyboard and one of Marcy’s gorgeous lyrics,” Goldrich said. “We had the privilege of focus. We were just here to do this show and being here and talking about it every day. At the end of the day, we got to enjoy your beautiful city. We came back and did some more work.”

Wetherhead said the experience created “a cocoon of creativity.”

Wetherhead said they can discuss things virtually, but nothing compares to spending eight or nine hours together.

“It grows and blossoms when you have all brains working together,” Wetherhead said.

Goldrich said she has always loved the 1998 movie “Ever After,” which is another take on “Cinderella,” without the fairy tale aspect. When watching the movie, Goldrich said she could envision songs that could fit in the story.