Zionsville resident and retired reconstructive plastic surgeon Geoff Randolph recently released “Music for the Ride,” his third children’s album. Music has been a passion for the entirety of Randolph’s life, but his genre of choice wasn’t always children’s music. 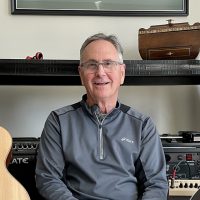 “When I was in junior high and high school, I was in rock bands and did all the usual stuff,” Randolph said. “I went to college and switched to singer/songwriter mode and did solo and duet performances at bars and restaurants to make extra money while going to school.

“For an interval of time in medical school, I stopped playing music. I didn’t have time for it.”

When Randolph had children, he rediscovered his passion for music. But this time, it wasn’t rock music.

“I just found it was a way for me to notch out time in my insanely busy schedule and find time to get the instrument out and play and be inventive with things (my children) are doing, and at the same time have family time,” Randolph said. “I could pull my guitar out and sort of record humorous or uplifting stories about my kids and family life.

“In my family life, I saw these things that are fun or worth celebrating or recounting, and that really allowed me to turn my brain off from the high-stress work/pressure side and really engage in the family side where I could be playful.”

“I ended up working a lot at night and doing emergency work at night,” Randolph said. “It created a lot of strain in terms of the mental stress of taking care of people who are sick. (With music), I wasn’t solving the world’s problems and I wasn’t out there talking about issues, I was talking about the things making me smile or I thought were really interesting happening in my own children’s lives.

“It was a great counter for the sorts of grim things or challenging things I was seeing every day in my reconstructive surgeries.”

“Music for the Ride” is Randolph’s third album and highlights his grandchildren. He released “Isn’t It Incredible” in 2000 and “Do You Wonder Too?” in 2007.

“(‘Music for the Ride’) is almost entirely based on my experience with our grandchildren, and the two prior albums were both products of specific things related to family life,” Randolph said. “This one is that next stage where all of our kids are grown now, and we have grandkids now. They’re just doing things that are fun to see, and I think they’re pretty universal.

“So, when I see them, I now fortunately have the time to be able to chronicle that.”

Randolph moved from Fort Wayne to Zionsville to be closer to his grandchildren in August 2020 and retired in October.