The third time’s a charm, at least when it comes to receiving federal dollars for the Steven Nation Community Pathway planned in northern Hamilton County.

Hamilton County recently received a $1.04 million grant from the Indiana Dept. of Natural Resources that will be used to fund the first of four phases of the trail. The local cost share for the first phase is approximately $590,000. which is already budgeted.

Hamilton County Commissioner Mark Heirbrandt said he’s not sure when construction will begin but surveying and engineer work is under way. He said he hopes for those steps to be completed this fall and that a construction contract will be awarded in early 2022.

“The timeline, I don’t know. It took us three attempts to obtain funding to get this first phase (funded). It’s an extremely competitive process,” Heirbrandt said. “Our first two attempts were in 2016 and 2017 through the Indianapolis Metropolitan Planning Organization, and the third was through the Indiana Dept. of Natural Resources and the Next Level trail program.”

Hamilton County was one of 18 grant recipients for the grant program.

“This should have been funded some time ago, but it’s a very competitive process, and we feel fortunate we are one of 18 awards by this pool of over 60 funding applications received,” Heirbrandt said. “So, we are going to take it.”

Although a timeline hasn’t been established, Heirbrandt said he hopes construction will begin by March 1, 2022, and that the first phase will be complete in fall 2022.

The master plan for the trail was finished in 2016.

“The plan really is a collaborative effort between the county and the northern communities of Noblesville, Cicero, Arcadia and Atlanta,” Heirbrandt said. “There was a steering committee involved with local merchants and members of the community as well as our consultant to help us develop a trail plan to link all of these communities together.”

Heirbrandt is confident the trail will be a popular amenity.

“We get calls all the time from citizens asking us, ‘Hey, I’ve heard about this for several years, when’s this going to be done?’” he said. “I think it’s going to really open up Koteewi Park and get a lot more traffic through there, especially bicycle traffic.

As for naming the trail after Hamilton County Councilor Steve Nation, Heirbrandt said “there’s nobody more deserving than that guy.”

The trail was named for Nation in recognition of his work in Hamilton County, such as being a founder of the Hamilton County Youth Assistance Program and serving as a judge and prosecutor. He was elected to the county council in 2020. The trail name was announced in March 2019.

“I thought it was a great honor, and I accepted it for all the people I’ve had the privilege to work with over the years,” Nation said. “I felt like we had accomplished many things. Without the great people in Hamilton County serving in the county and the cities and towns and townships and working with government and businesses and members of the community, (the work) would have never gotten done, so I felt very privileged to receive it. I also accepted it for all those people.” 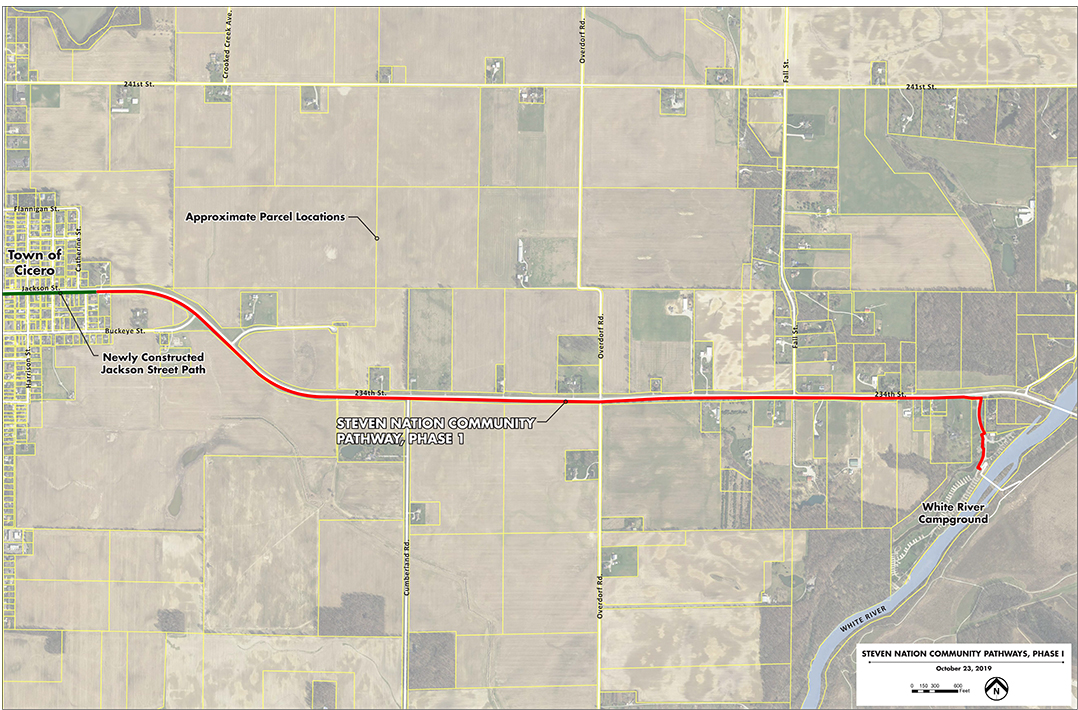 Map of the trail

The Steven Nation Community Pathway will extend from downtown Atlanta through Cicero, east to Cumberland Road, and south to Potter’s Bridge Park in Noblesville. An arm of the trail also will connect to Strawtown Koteewi Park on 234th Street in Noblesville, which will be the first phase to be constructed.