Braden Smith has become a trailblazer for the Westfield High School basketball team. 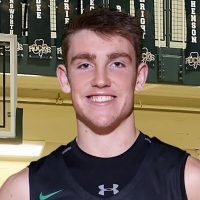 “It’s exciting for our school, our program and community to have a caliber of player like this,” Sumpter said. “There’s a lot of excitement for basketball in our community and Braden is a big part of that.

The 6-foot, 170-pound point guard averaged 22 points and 6.2 assists per game as a junior for the Shamrocks (18-5). Smith will play for the Junior Indiana All-Stars against the Indiana All-Stars June 9 at Brownsburg High School. That will help the seniors prepare for the annual two-game series with Kentucky.

Smith, who has started every game since his freshman season, is seeking next season to become the first boys senior All-Star from WHS.

“I think he’ll be in the conversation for Mr. Basketball, too,” Sumpter said. “He just makes everybody around him better. He’s been the best point guard in Indiana for the last couple of years. He’s a typical Indiana high school basketball player. What sets him apart is his work ethic. He’s in the gym all the time. The weight room has been great for him. He’s put on about 30 pounds since his freshman year.”

Smith said he made the most strides with his leadership. He he was helped by doing a couple of classes with teammate Kai Butterworth’s father, Brad Butterworth, who has been a college basketball coach.

“He talks about leadership and what college coaches look for,” Smith said. “It helped me become a better leader and how to get through certain situations and be successful.”

Smith had seven offers before Purdue, but all were from mid-majors, such as IUPUI, Toledo and Appalachian State.

Smith talked with his parents Ginny and Dustin Smith, who both played collegiately for Arkansas Tech, and basketball friends of his parents, including IUPUI women’s basketball coach Austin Parkinson and his father, Bruce Parkinson. Both Parkinsons are former Purdue players.

“I tried to see what they thought, and they said ‘Braden, you can play there. I don’t know what you are waiting for, go for it,’” said Smith, who took two days to commit.

Westfield’s Alyssa Crockett, who averaged 17.2 points last season and has committed to Michigan, will play for the Girls Junior All-Stars in the June 9 doubleheader.

Sumpter said both the WHS boys and girls basketball teams have been invited to play at the 2021 Hall of Fame Classic in New Castle. The girls will play Dec. 29 and the boys will play Dec. 30. Ginny Smith coaches the WHS girls. She took the job when Sumpter moved from being the girls coach to boys coach for the 2015-16 season.