You are at:Home»Current in Fishers»Fishers Cover Stories»First anniversary: Leaders of Fishers Health Dept. reflect on first year amid pandemic

Indy Lane and Monica Heltz smile on a sunny late April day and as they get in position for a picture.

“Tell everyone that we’re vaccinated, so it’s OK if we stand close,” said Lane, laughing.

The two women have had plenty of opportunities to become close during the past year. They are the leaders of the Fishers Health Dept., which on April 24 marked its first anniversary.

Heltz is the public health director and Lane is the chief medical director. One  year ago, they met in Heltz’s backyard to begin work to launch the department near the beginning of the COVID-19 pandemic. But these meetings were no backyard barbeques; they were fortunate if they found time to eat at all.

“We’d be lucky if we could get a Starbucks,” Lane said.

A year later, FHD officials are looking back on their accomplishments in the last 12 months and preparing for the future.

According to the FHD Data dashboard on the FHD’s website, from April 29, 2020 until April 27, 2021 more than 44,000 people had been tested for COVID-19 in Fishers’ testing centers. Nearly 29,000 COVID-19 vaccine doses had been administered at vaccination centers in Fishers, with 59 percent of the city’s population having received at least one dose. Of the age group at the highest risk of developing severe bouts of COVID-19 (ages 70 and older), more than 7,400 people had been fully vaccinated.

Mayor Scott Fadness had already been mulling the need for the city to create its own health department when the COVID-19 hit Indiana. The pandemic set the process in motion.

Fadness found his first leader for the department through a connection to Bryan Mills, president and CEO of Community Health Network, which led to Lane’s hire.

“I was tapped on the shoulder to see if I could offer some support,” Lane said. “At that time, the challenge was for the health department’s ability to issue COVID testing, and that was where I was brought in to help facilitate that.

“I think the mayor’s vision was that if we could get testing up to speed, then one day we could be able to distribute vaccinations, too.”

Unlike Lane, who was asked to help, Heltz reached out to the city. She had spent her career in public health and was looking for a new challenge after completing her doctorate in nursing one year prior through Frontier Nursing University.

“I’ve only ever wanted to do public health. Public health is my passion,” Heltz said. “I had been working at Marion County for 10 years and saw that the mayor had started a health department, so it seemed like good timing for me as far as being able to put my skill set to use and help in this situation, and I live in Fishers.”

Heltz and Lane credit the department’s growth to the engagement of other various Fishers government agencies.

“Coming from a standard health department and not the integrated structure that we have has been something I wasn’t used to,” Heltz said. “I’m not used to having an entire public works team and all the support in the city to put all of their resources behind this effort and make sure that this happens for our citizens.”

But the FHD isn’t only dealing with the pandemic. It’s also responsible for investigating animal bites and keeping vacant buildings free of dangerous bacteria, among many other responsibilities. The health department also has tracked more than 30 reportable diseases and tracked Ebola outbreaks in Africa to be ready with protocols in case someone arrives infected from a distant land.

“Diseases are going to keep popping up,” Heltz said. “The more agile and ready that we can be to figure out how to combat those things, the better. I hope we don’t have to do this again soon.” 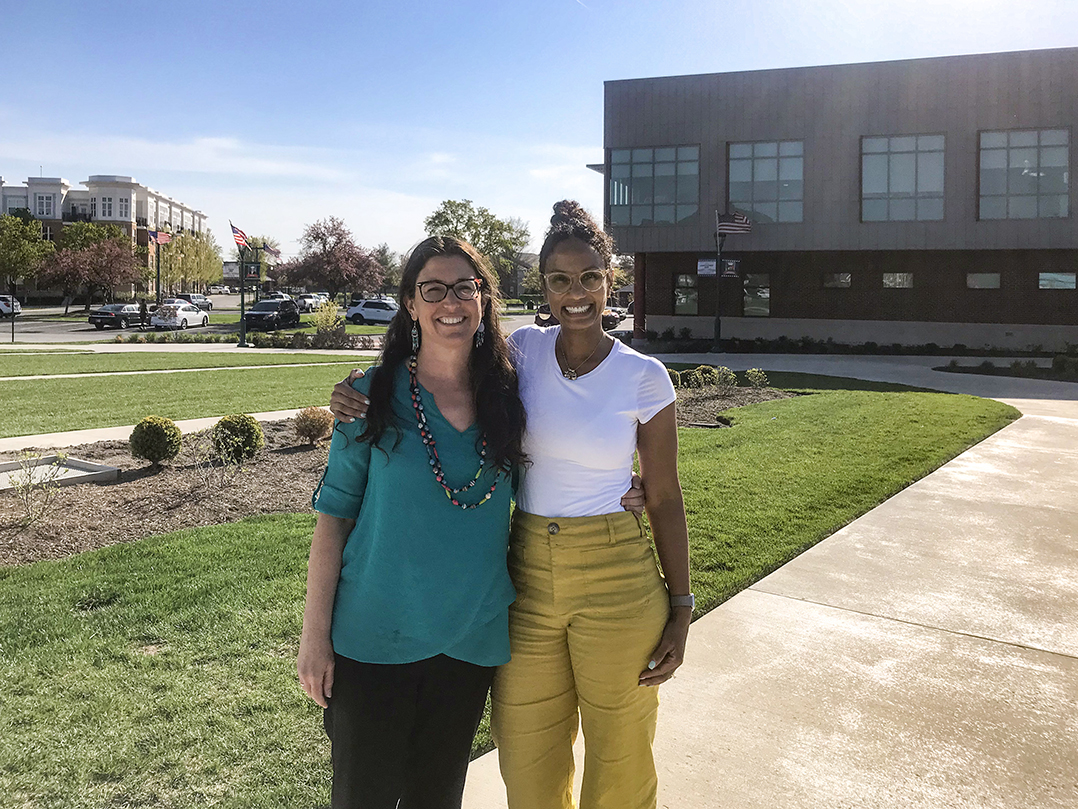 From left, Monica Heltz and Indy Lane pause in front of the Fishers Fire Dept. The Fishers Health Dept. shares space in the building with the fire department. (Photo by Jonathan Matthes)

As a whole, Fishers rate the community’s risk to COVID-19 as significant, but it is on the lower end, nearer to moderate. It has been holding steady at the mark for a few weeks.

Residents can receive a COVID-19 test from the Fishers Health Dept. in less than a day and get the results in less than two days. Contact tracing moves quickly, less than 24 hours.