It was May 1989 and new Vice President Dan Quayle and his family were aboard Air Force Two to fly home to Indiana to give a speech and attend the Indianapolis 500. The intercom crackled to life.

“It will be a beautiful day for a race,” the pilot said through the intercom. “And, Mr. vice president, both of your pilots are Hoosiers.”

The co-pilot was from Kokomo. The pilot, and the voice on the intercom, was Jim White of Fishers, a Lafayette native who is spending part of his retirement driving a school bus for Carmel Clay Schools.

White, 70, is the type of guy who does not bask in the afterglow of a career that included flying two future presidents aboard Air Force Two after 20 years as a pilot in the Air Force that took him all across Europe and the Southeast Asia, flying transports during the Vietnam War, flying supersonic in a T-38 and winning a professor of the year award while teaching aviation students for several years at his alma mater, Purdue University. Instead, he’s the type of person who arrives at work at 6:30 a.m. and drives whatever bus needs driven. The aviator is now a substitute bus driver.

“When I’m driving, it brings back memories,” White said. “You’re in the cockpit and throwing switches, and then you’re picking up young kids. It’s fun. You get to interact with the kids. The elementary kids are brutally honest. They’ll tell you exactly what’s on their minds.”

When White arrives in the morning, he finds a printed-off route with all the stops numbered in order, along with the estimated time that he is supposed to arrive at each stop. He then drives the route, picks up the students, drops them off at school and returns the bus before he enjoys his free middle of the day. Later in the afternoon, he repeats the routine in opposite order, returning the children home safely.

In White’s view, the job is not all that dissimilar to flying a McDonnell Douglas DC-9. It is the same principal: Get everyone home safe and on schedule.

An unblemished flying record was how White got his transfer to Air Force Two. He was tired of the long oceanic flights. The longest one he ever flew was 16 hours from Albuquerque to Aviano in northern Italy. The plane had to refuel in midair, a common maneuver today but one White helped pioneer on C-141s. He spent part of his time in the Air Force training pilots how to refuel mid-flight.

“You’re going to spend about 30 minutes, on track, hooked up to the tanker,” White said. “We were taking on 36,000 gallons of fuel at the time. We’d get hooked up, then you’d turn off your radar and radio, (the tanker) is your guidance. If he makes a turn, you make a turn. While you’re sitting there you have to keep adding power because you’re getting heavier as (the tanker’s) getting lighter, otherwise you’ll fall right off the boom. It was tense. Thirty minutes on the boom, you were beat.”

White wanted to scale back from the lengthy flights that took three days to fro his body to recover from. So, in the mid-1980s he applied for an opening at Andrews Air Force base in Washington, D.C., to fly presidential support.

“I had all the experience they needed. My flight record was good,” White said. “They hired me.”

“When you interview for Air Force Two, you interview and they just pick a few of the pilots,” she said. “The FBI came to talk to our neighbors to check and see if we were nice people, and our neighbors said, ‘Oh, yes, they’re very nice. They go to church every Sunday.’

“And so, he got that job and we moved to Northern Virginia.”

White flew a DC-9, which he was thankful wasn’t a transoceanic-type plane. He flew major decision-makers in the federal government. At various times, members of Congress, the Joint Chiefs of Staff and secretaries of defense and state were all on his plane. White flew former first lady Nancy Reagan, too. She was a white-knuckled flier, White said. He would mostly talk with her about the weather to calm her.

On Air Force Two, then-Vice President George H.W. Bush was his main passenger, followed by Quayle when he eventually became Bush’s vice president. When Bush flew on Air Force Two as Ronald Reagan’s vice president, he would occasionally come up to the cockpit and visit because of his interest in aviation. Bush was a U.S. Navy pilot during World War II.

“(Bush) had a good sense of humor, so we could joke around with him,” White said. “One time he came up, we were taking him to Mexico and were over the Gulf of Mexico, and he asked where we were. I had the map open, and I said, ‘I really don’t know, I was hoping you could tell us.’ And he said, ‘Well, let me see.’ We all laughed. He was the kind of guy you could kid along with.”

White flew the Bush family — including future President George W. Bush — to their vacation home in Kennebunkport, Maine, on a few occasions. On one occasion, then-Vice President Bush invited his pilots to a cookout at Kennebunkport, but White was not on the crew that day and missed out on the opportunity.

From 1986 to 1991, White flew the second-most powerful man in the U.S. across the nation before moving on. For a couple years, he directed the U.S. operation moving Army tactical nuclear weapons out of Europe. Then the Air Force wanted to assign him to a post in Turkey, but he declined because he wanted to stay stateside. He soon retired and returned home to Indiana. 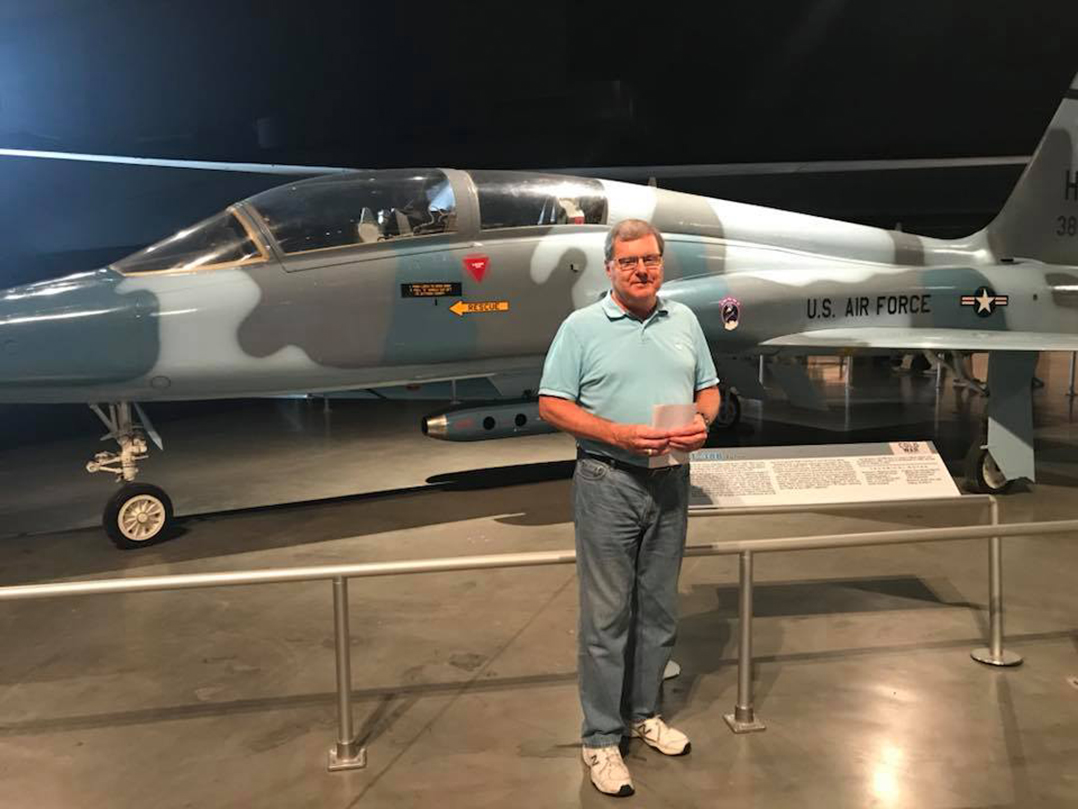 Jim White before a T-38. During his time in the Air Force White almost never flew fighter jets, but he did fly supersonic when he gave this model a spin.

For a time, White taught at Purdue, but eventually he found a transportation director position at Hamilton Southeastern Schools that required logistical knowledge, one of the many skills that he had mastered during his time in the Air Force.

For 15 years he directed the bus operations, making sure that they safely got where they needed to go and did so on time. Occasionally, he drove a bus when needed. Anne was happy to have him at home at night. but eventually the demands of the position wore on him and he was ready for something else.

“It was a 24/7 job for the most part,” White said. “I was pretty hands on. I’ve always been, so it took a lot of my time, and I wanted to relax and do something different.”

White wasn’t looking for a full-time job but offered to be a substitute bus driver. And for three years that is what he has done almost every morning. But sometimes, while shuttling children to school, the present and past blur and memories flood back of a younger man piloting a different type of machine.

“Sometimes my flying comes to mind,” he said. “As many years that I flew in different types of airplanes, there is no better feeling than to be sitting at the end of the runway, release the brakes and push the power up to take off. There’s so much adrenaline there. It was a rush and I never got tired of that. I miss that. It was a thrill. You go running down the runway, the engines are fired up and you’re ready to take off and away you go. That part you kind of miss. I remember that a lot, but that’s in the past.”

What is Air Force Two?

Most people know that Air Force One is the plane that carries the president of the United States, but Air Force Two does not work the same way.

Air Force Two is the designation for whatever airplane the vice president is aboard, so the model of airplane can change but the call sign does not. Most of the time, Jim White flew Vice Presidents George Bush or Dan Quayle aboard a DC-9. If the vice president was not on board, the plane would just be identified by its tail number.

Air Force Two was not the only fun call-sign to know. If a plane identified itself as “Executive One Foxtrot,” it meant the first lady was aboard.