As time moves on, the number of Holocaust survivors keeps shrinking.

“Each day we lose another witness to this terrible atrocity,” said Dr. Alex Kor, son of Holocaust survivors Mickey and Eva Kor. 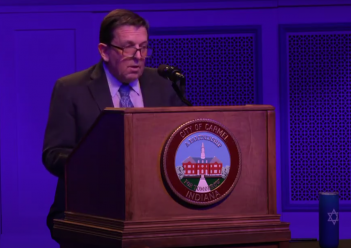 Kor, a podiatrist for Witham Health Services in Lebanon, traveled to Auschwitz 25 times with his mother, who died at age 85 in July 2019. Eva, the founder of Terre Haute’s CANDLES Holocaust Museum and Education Center, frequently was asked to share her experiences.

Eva and her twin sister, Miriam, survived medical experiments conducted by Josef Mengele at Auschwitz. Eva’s parents and two sisters were among the 6 million Jewish people who died in the Holocaust.

“Now more than ever, Dr. Kor is dedicated to continuing his mother’s work,” Carmel Mayor Jim Brainard said at the City of Carmel’s Holocaust Remembrance Ceremony, which was held virtually April 16 because of the COVID-19 pandemic.

Kor, who served as the main speaker, said he feels a great obligation to tell his family’s story.

“Each day I feel an even greater urgency to serve as a voice for my father,” Kor said of his 95-year-old father.

Two nights before she died, Kor said he suggested to his mother that she slow down. She said there was no way because she had more work to do.

Kor said his parents dealt with their past in different ways.

“My father rarely wanted to discuss his ghetto and concentration camp experiences, even when my sister and I would open up,” Kor said. “He didn’t understand why anyone would want to know such a sad story. He often said his story was like a black-and-white movie and the audience would leave sick after the preview. He never really realized what impact his stories would have had on so many others. However, as my mother became more and more outspoken, I noticed my dad became slightly more comfortable with the idea of talking.”

One day a small class visited CANDLES and was expecting Eva to speak, but she wasn’t available.

Kor’s mother later forgave a Nazi doctor, Dr. Hans Munch, who was acquitted after World War II of war crimes and returned to his practice in Germany. Munch later agreed to make the trip to Auschwitz on the 50th anniversary of the liberation and attested to the mass murders. Eva wanted to thank him, but she wasn’t sure how to do it.

At first, Kor said he wasn’t sure it was a good idea, but later realized her decision to forgive has done so much good in Indiana and around the world. Eva later also forgave Mengele, known as the “Angel of Death.”

His mother’s strength was always visible. The last few years Kor said he has noticed just how tough his father is as well.

“A lot of people say my dad has the heart of a lion but the soul of a poet,” Kor said. “From my mother, first and foremost, I learned to never give up. When in 1987 I was diagnosed with cancer, my mom said ‘I’m a survivor. Your dad is a survivor. You will beat cancer and you will survive.’”