You are at:Home»Current in Carmel»Carmel Cover Stories»A ‘one-two punch’: Wilkinson twins’ design work makes its mark on Carmel, beyond

The 44-year-old identical twins founded Wilkinson Brothers, a graphic design and illustration studio, in 2003. The studio, 31 S. Range Line Rd., has been in the Carmel Arts & Design District for 10 years.

“We each have our own families and our personalities are pretty different, but when it comes to work, we’re on the same page,” Casey said. “We share the workload as much as possible and often collaborate in each phase of the design process. It’s a one-two punch that draws upon a communication level established since birth.”

At the studio, each day is different, so Corey said they don’t keep traditional office hours.

“Owning and operating a design agency means we never truly clock out, but our schedules are often adjusted to attend field trips, soccer games or be present during family milestones too important to miss,” Corey said. “We love our jobs but spending as much time as possible with our wives and kids has always been our goal.”

The brothers grew up mowing lawns, pouring concrete and working on farms in Evansville.

“In middle school and high school, we designed yearbook covers, illustrated for the school newspaper and hand-lettered signs,” Corey said. “This combo of hard work and creativity led us to pursue commercial art and visual communications in college. Now, we give thanks daily for being able to make a living drawing and thinking creatively.”

Corey majored in graphic design at Ball State University while Casey majored in visual communications at Ivy Tech Evansville. The other employee is Corey’s wife, Brandy Wilkinson, who helps with accounting and administrative duties. They sometimes work with specialists, such as database developers or photographers.

Wilkinson has clients across the United States, but most of the clients, including from the sectors of motorsports, municipalities and manufacturing, are in central Indiana.

“The City of Carmel is a client of ours, a partnership we’ve enjoyed since 2006,” Casey said. “We’ve helped promote the Carmel Arts & Design District since its early days and continue to design ads, signage, maps and branding for many of the city’s events and venues.”

Recent Carmel projects the brothers have designed are the logos and branding for the Carmel Clay Public Library, Brookshire Golf Course and Hotel Carmichael.

Visitors to Midtown Plaza also can see the company’s design-work on the pingpong tables, bike hub, water tower and the large postcard mural along Elm Street, which is designed to be a photo op or selfie station.

Nancy Heck, director of community relations and economic development for the City of Carmel, said the city has enjoyed partnering with Wilkinson Brothers for more than a decade.

“They have the innate ability to capture the essence of what we are trying to communicate and create graphics that clearly and vividly share the message, making the design process easier and more enjoyable,” Heck said. “You will see this in many of our printed newsletters, magazine ads and visitor guides. Even their work space in the Carmel Arts & Design District reflects their zest for life and love for the creative process.”

The business was located in Carmel and Fishers before moving to its present Carmel studio in a former carriage house that belonged to O.W. Nutt, the town’s hardware store owner, who was born in 1876.

“We wanted a workspace where we’d be surrounded by elements of fun and reminders of our blue-collar upbringing,” Casey said. “It’s an homage to generations of contractors, mechanics and truck drivers in our family tree. Our grandfather’s hard hat and welding helmet are on display along with the racing goggles our dad wore during the Baja 1000. The shop is home to some patina-rich gas station memorabilia that was found by my father-in-law.”

Corey said meetings take place around a 1960s drafting table next to an 80-year-old solid-oak desk from an Indianapolis post office.

The brothers built workstations out of old pallets, then hand-painted and distressed the desktops to look like old signs. They also upcycled a 1953 Oldsmobile found in a Noblesville scrapyard, turning it into a one-of-a-kind “Oldsmo-desk,” with a hood that opens with functioning lights.

Corey said motorcycles play a big role in their lives and work.

“One of our shop bikes is a sidecar manufactured in the Ural Mountains, a vehicle designed for utility and adventure,” Corey said. “Being able to hop on and putter down Main Street for lunch is a nice escape from the confines of the digital world.”

Through their motorcycling pursuits, Corey said the brothers have linked up with clients such as the American Motorcyclist Association, Red Bull, Indianapolis Motor Speedway and MotoAmerica. 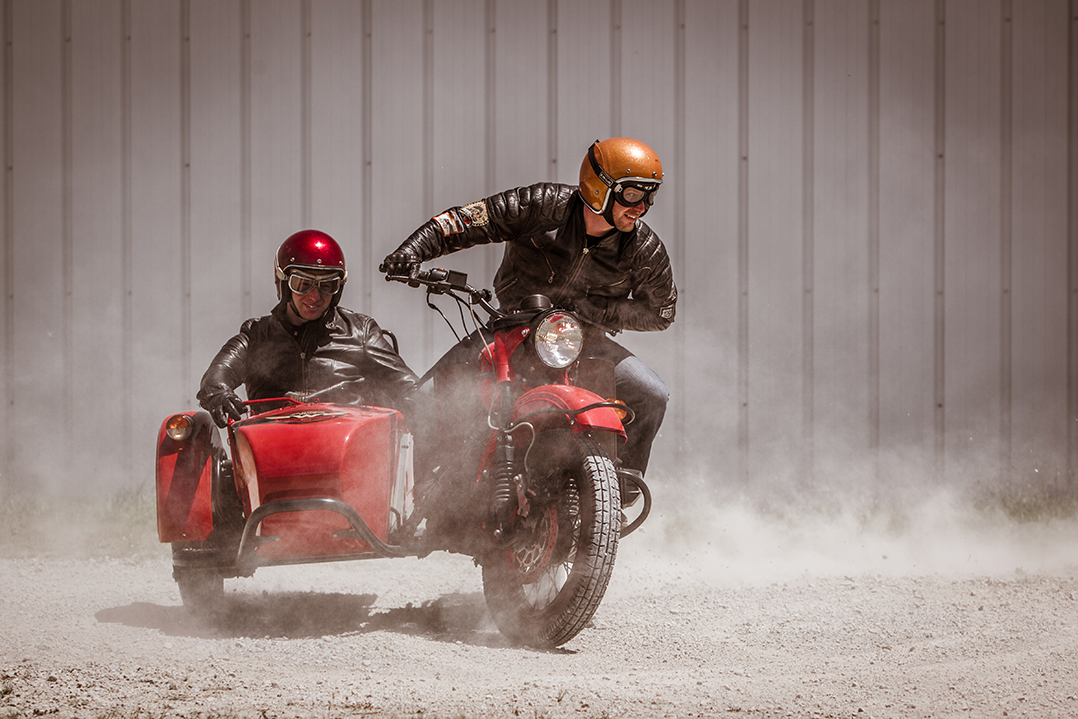 Corey Wilkinson, right, steers a motorcycle with his twin brother, Casey, in the sidecar. (Submitted photo)

Corey Wilkinson of Wilkinson Brothers said just up the street from the shop was the summer studio of Franklin Booth, one of America’s greatest illustrators. In 1916, Booth completed a two-week auto trip that passed through Carmel with writer Theodore Dreiser. What is now the Carmel Arts & Design District can be seen in Booth’s charcoal illustrations that supplement Dreiser’s “A Hoosier Holiday,” one of the first automobile travel books ever written.

“There’s a history of hardworking and creative people here, a reputation that continues on with the vision of Mayor (Jim) Brainard and likeminded individuals,” Corey said. “Amidst the galleries, boutiques, theaters and studios, we find joy working in this old carriage house nestled in a community that’s so invested in the arts.”