At its core, Prevail is working to put itself out of business.

The Noblesville-based advocate for victims of crime and abuse works to promote its mission to the community in April, which is Sexual Assault Awareness Month, but its objective is to achieve significantly larger long-term results.

“What we are actually trying to do is call it more Sexual Assault Prevention Month,” Prevail Marketing and Events Coordinator Natasha Robinson said. “Just bringing awareness is one thing, but really focusing on preventing the crime is a totally different thing. So, you know, a lot of that is breaking down the barriers with victim blaming and believing victims when they say they were a victim of a crime. Those are two issues we face constantly.”

Prevail has several opportunities throughout April to promote awareness and prevention, including Denim Day on April 28, when Prevail staff members wear jeans or denim.

“Why we wear denim is because in Italy in 1992, there was an 18-year-old girl who was raped, and why they decided the perpetrator couldn’t be guilty is because her jeans were too tight for him to pull off and rape her, so the next day all the women in parliament wore jeans as a protest to the Supreme Court,” Robinson said. “Those are just examples of victim blaming, (such as), ‘Her skirt was so short, she was totally asking for it,’ ‘Men can’t be sexually assaulted, they’re too masculine and too big so that can’t happen to them,’ so those are a lot of things we deal with around Sexual Assault Awareness Month.”

This year, National Crime Victims’ Rights Week is from April 18 to 24, and Prevail is promoting it through several public displays of the Clothesline Project, a collection of T-shirts designed by Prevail clients. The color of the shirt corresponds to the type of crime the victim faced.

“We started the Clothesline Project to give the victims a chance to have a voice,” Robinson said. “This is their chance to anonymously be on a soapbox and share a message with the community.”

T-shirts from the Clothesline Project will be on display across Hamilton County throughout the month, including at Riverview Health, the Hamilton County Sheriff’s Office, Hare Chevrolet, HAND, Trinity Free Clinic, the Westfield Washington Township Trustee’s office and elsewhere. Some participating organizations display the shirts for a week, and others display them for the entire month. Robinson said there’s still time for interested businesses to display the shirts, and they can leave them up through May, if they’d like.

Prevail Executive Director Susan Ferguson said the Clothesline Project helps remove the victim stigma from a crime, especially one of a sexual nature.

“I think it’s important because sexual assault is one of the most underreported crimes, and this is a way to create an environment that allows people to feel less stigmatized about reporting it and asking for help,” she said.

“Education, to me, is the key, and one of the reasons I like the Clothesline Project is because each T-shirt you see tells a unique story,” Thurston said. 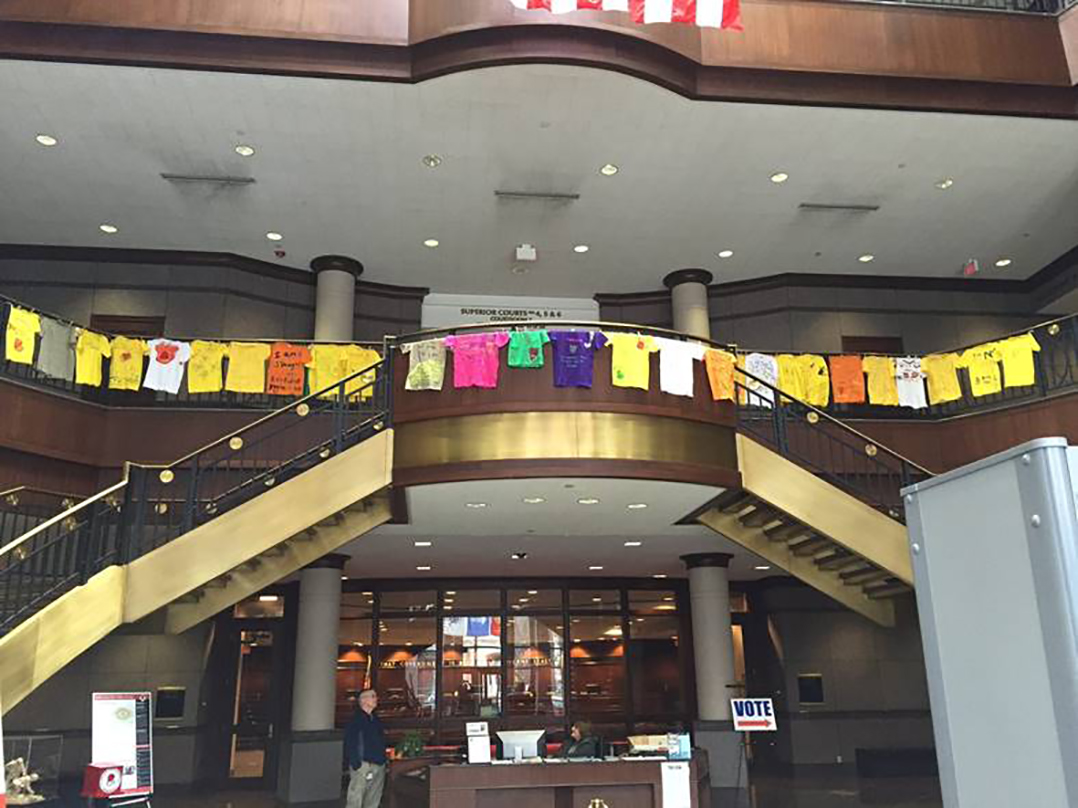 T-shirts are displayed as part of the Clothesline Project at the Hamilton County Courthouse. (Submitted photo)

How to reach Prevail

Prevail Marketing and Events Coordinator Natasha Robinson said it doesn’t matter how long ago a crime occurred, victims are eligible for Prevail’s services any time.