You are at:Home»Current in Carmel»Carmel Business Local»House of Soul opens restaurant in Carmel after instant success in Indy

House of Soul co-owner Dave Brown said when he and business partner Adam Belt met their year’s goal of sales in one month, they knew they might need to expand quicker than originally thought. 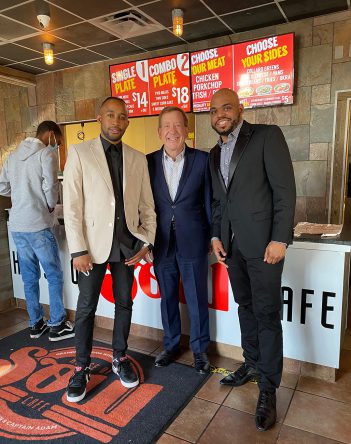 Brown and Belt opened House of Soul at 4225 S. East St. in Indianapolis in February with a goal of selling 500 meals a month. They sold 3,500 meals their first month and 5,000 meals their second month. On April 9, they opened their second location at 9802 N. Michigan Rd., Carmel.

“We couldn’t even let everybody in the building,” he said. “Our goal is to have 10 locations. We had such a big turnout at the (first location) daily, we knew we needed another location to keep up with the demand.”

Brown and Belt chose the west Carmel area because it’s near a highway and there’s not another soul food restaurant in the area.

“We wanted to be the only ones,” Brown said.

Brown has always been interested in cooking. He attended culinary school after he served in the military from 2003 to 2012. Brown served in the U.S. Navy as a rescue swimmer for four years, and also served in the Army.

“I’ve always cooked food for friends and family and things like that, and it became something I was very passionate about,” he said. “I used my VA money for school to do that, and it paid off.”

Prior to opening House of Soul, Brown worked in catering and menu writing for restaurants. His favorite item on the House of Soul menu is catfish.

As for future locations, Brown said he and Belt, who lives in Arizona, are considering another in downtown Carmel to offer a more upscale version of House of Soul, but nothing has been decided.