You are at:Home»Current in Carmel»Carmel Cover Stories»‘Art is the greatest gift’: Kuaba Gallery brings work, passion of African artists to Main Street

Tucked between rows of apartments at the edge of the Carmel Arts & Design District is the Kuaba Gallery, which primarily features modern work by African artists. 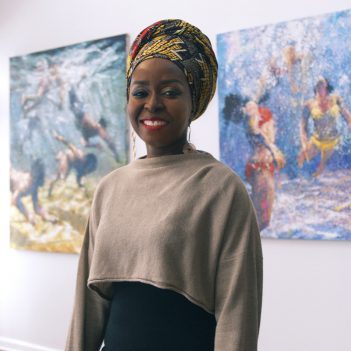 Jayne During pauses in the Kuaba Gallery on Carmel’s Main Street. (Submitted photo)

Born in the western African nation of Ghana, gallery founder Jayne During moved to Indiana 31 years ago to attend college at Purdue University. After losing her job, During decided to draw on her passion for art and open the Kuaba Gallery, which debuted in 2001 in downtown Indianapolis. In 2019, the gallery moved to Carmel.

“Art is the greatest gift given to humans,” said During, who is not a professional artist herself. “It communicates to me. I’m blessed to be able to walk into work every day and see these pieces and escape to each one. Though every piece of art is different, its meaning is universal.”

A Carmel resident, During represents artists from diverse, international backgrounds, with most pieces highlighting societal issues the artists have encountered. 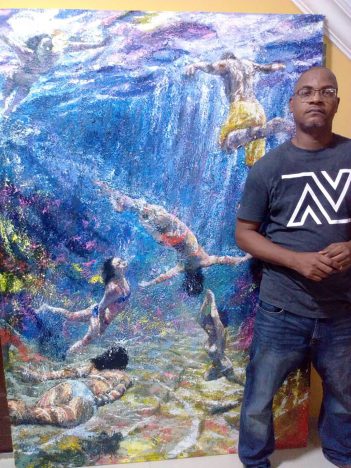 Nigerian artist Chika Idu is among the artists with work on display at the Kuaba Gallery. (Submitted photo)

For example, on display in the main room of During’s gallery is an acrylic series by Nigerian artist Chika Idu, who created the work after noticing that children were jumping and swimming in the same water used for cooking and defecating. He also created a series on women wearing masks, a reflection on the secularization of women and how culture forces them to wear different façades.

“Art is everything,” Idu said. “It’s an escape, like a psychological shelter, not just for the artist, but also to those who appreciate it. It’s a quiet shout without shouting.”

Also in the gallery is a stone sculpture of a woman swinging her child created by Dominic Benhura, an artist from Zimbabwe who began his career at age 12. Initially inspired by animals, he later shifted his focus to women and children. His sculptures are renowned for their movement and playfulness.

“Everyone can see a child smiling. In the same way we share this world,” Benhura said. “Despite our color, we can all celebrate life.” 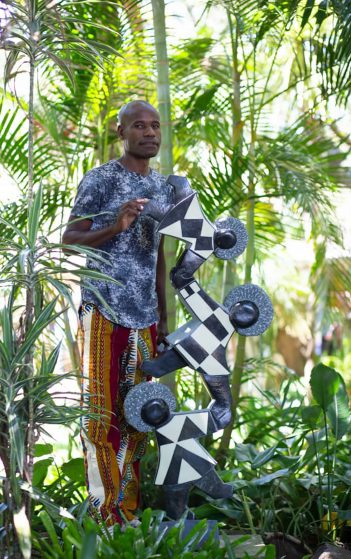 Dominic Benhura, an artist from Zimbabwe, is among artists with work on display at the Kuaba Gallery. (Submitted photo)

The City of Carmel is working with During and the Kuaba Gallery to install a sculpture by Benhura along Main Street near the Carmel Chocolate Cafe later this year. The $20,100 sculpture is funded by Clay Township.

Nancy Heck, City of Carmel director of community relations and economic development, said the gallery has been a welcome addition to Carmel, and the city’s mission to promote the arts.

“Jayne makes it unique because (the gallery) is her personality,” Heck said. “From the space to the diverse number of artists she attracts, During’s gallery reflects unmatched zealousness. She lends her platform to these artists, allowing them to share their work and voice, transcending bonds between people and bringing art to every corner of society.”

During plans for the Kuaba Gallery to continue building bonds with the community by hosting several events in the coming months. Idu and artists Christine Drummond and Patrick Tagoe will visit as their work is exhibited, and Benhura will hold a workshop in May.

During encourages Carmel residents and visitors to learn about different cultures around the world through the art in her gallery.

“The best part about (the gallery) is that each time people come in, they see something new and experience a different message that they didn’t before,” she said. “It’s, in a way, intoxicating.”

Because of the COVID-19 pandemic, those interested in visiting the gallery should schedule a private viewing by calling During at 317-9565-8405 or emailing kuabagallery@gmail.com. Some featured paintings are on the gallery’s website, kuaba.com. The gallery, at 404 W. Main St., is open Monday through Sunday between 11 a.m. and 7 p.m. 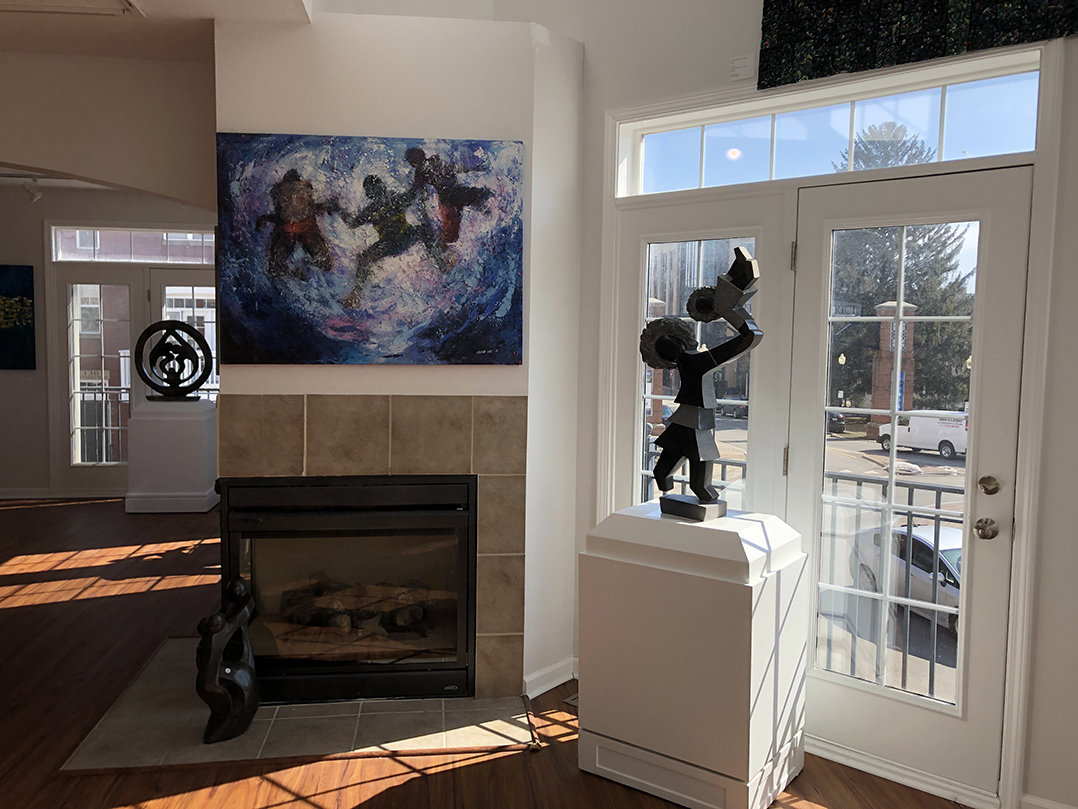 The Kuaba Gallery features work from a variety of international artists. (Photo by Sophia Ling)

Jayne During, owner of Carmel’s Kuaba gallery, is one of six Hoosiers featured in the #myINcrowd campaign, which is highlighting six Indiana residents on the national stage during the NCAA men’s basketball tournament.

The campaign, organized by the Indiana Destination Development Corp. and presented by famous Hoosiers David Letterman and Sage Steele, aims to shine a light on positive stories in Indiana at a time when the state is in the national spotlight hosting all games in the NCAA men’s basketball tournament.

“With March Madness shining a national spotlight on Indiana, we want to showcase diverse Hoosiers from around the state who are doing amazing work,” Gov. Eric Holcomb stated in a press release. “This campaign tells the stories of unique and successful people who call our great state home.”