You are at:Home»Current in Carmel»Carmel Cover Stories»Running for a reason: Athletes eager to return to competition at Carmel Marathon after year of canceled events

After the COVID-19 pandemic led to a year with very few races, elite runners are eager to return to competition. The Carmel Marathon and its associated events return April 3, giving top athletes from Indiana and elsewhere a chance to run for a reason.

Here are some of their stories. 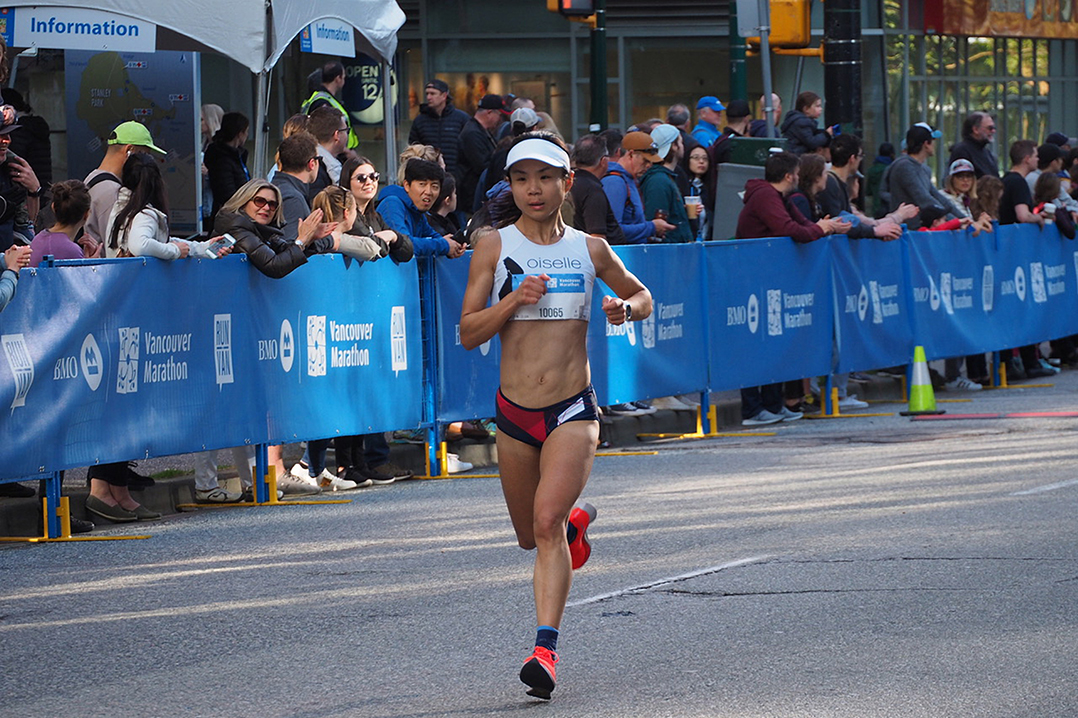 Sophia Liu, 37, had originally hoped to return to her native nation of China to compete in its Olympic Marathon Trials on April 11.

Restrictions amid the COVID-19 pandemic made that impossible.

“From the (United) States to China, it requires 14 days of quarantine in a hotel and seven days at home,” Liu said. “That’s 21 days without running. For a marathon, you just can’t perform like that. I was pretty disappointed at the time, but that’s the reality. I started looking for races close in that time frame, so I can alternate.”

The Carmel Marathon, organized by the Carmel Road Racing Group, set for April 3 fit nicely into her schedule.

“Indiana, I consider my home state, because I had been there for four years,” Liu said.

A research scientist in Seattle at the University of Washington, Liu was at Ball State University from 2011 to 2014 to earn her doctorate in human bioenergetics in 2014.

Liu said she is familiar with Carmel Road Racing Group events, as she ran the half marathon during the Carmel Marathon weekend in 2014.

“I saw this year’s field would be pretty competitive. That’s why I choose to go there,” Liu said.

Liu said she isn’t sure if Chinese officials will consider her time for a spot on the team if it is better than the times in China’s Olympic trials.

“If I run a similar time, I hope that they could consider (it),” she said. “I couldn’t get confirmation from (Chinese Olympic officials).”

She had competed in 2018 and 2019 in races in China to qualify for the Olympic Trials.

Liu started running in 2009 when she came to the United States for graduate school.

“When I was in China, at that time running wasn’t very popular. Now, everybody runs in China,” Liu said. “I always was active and just never trained for anything.”

Liu said the Central Washington University students around her were all running, so she got serious about it. She ran her first marathon in 2010. 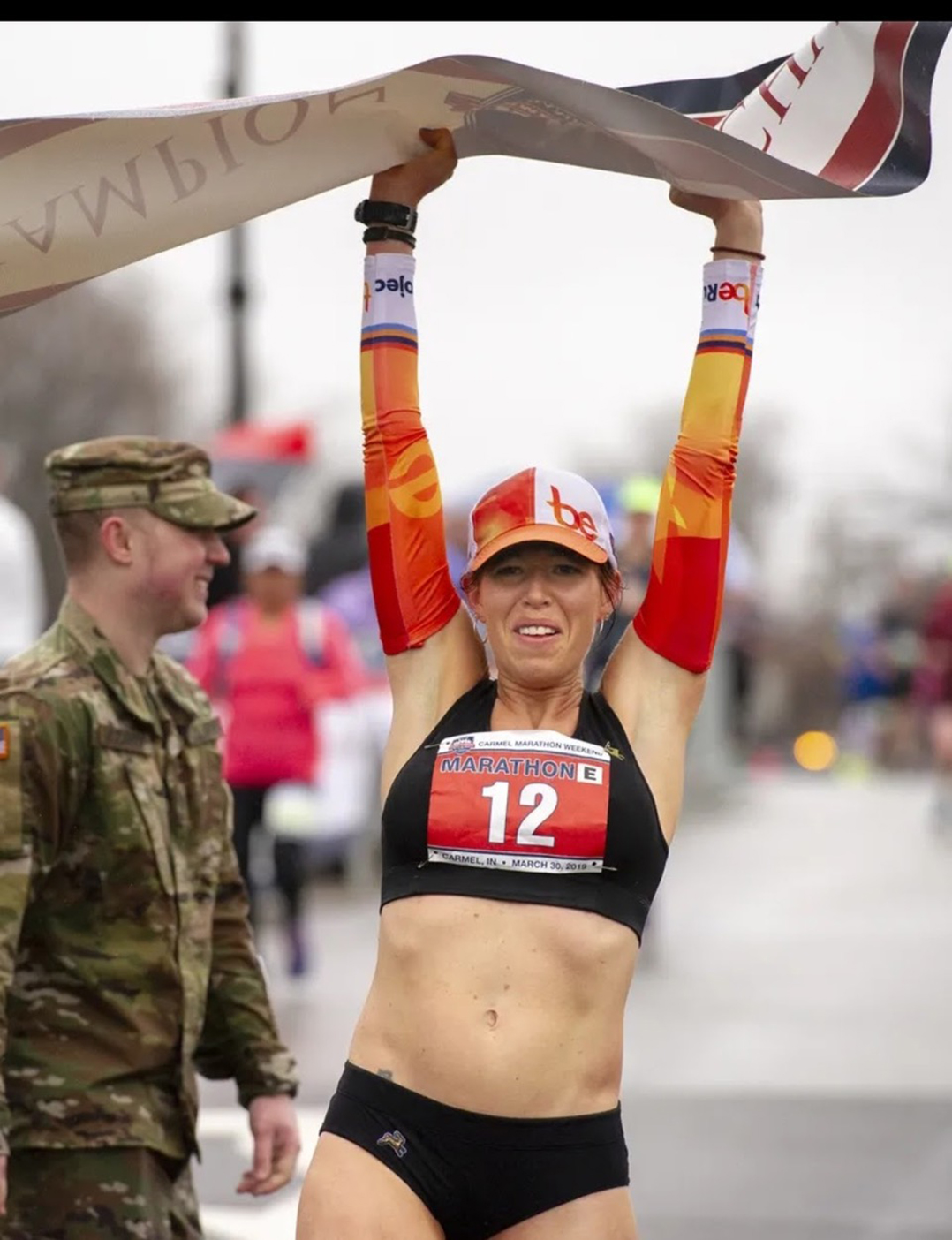 Cincinnati resident Laurah Lukin was in for a bit of shock after winning the 2019 women’s marathon.

“I was actually pregnant when I won the last race,” she said. “I had no idea at the time, and actually, we have this great picture of me drinking beer out of my trophy after the race before I found out I was pregnant. Oops.”

Lukin, who found out she was seven weeks pregnant at the time of the race, said her focus is not on external competition.

“This is my first marathon after the birth of my second child,” Lukin said. “Combining postpartum recovery and post-COVID racing has created a very nebulous understanding of my current fitness. I am super excited to race, and I see this as an excellent opportunity to figure out where I am and how to continue to improve. I have been training pretty hard, but with the COVID restrictions, everything is an adjustment.”

After winning the Carmel race, Lukin said she ran the Flying Pig Marathon in Cincinnati for fun when she was three months pregnant.

“Since I gave birth in December of 2019, the world shut down in response to COVID before I was recovered enough to train for a marathon,” Lukin said. “So, it feels like it has been forever.” 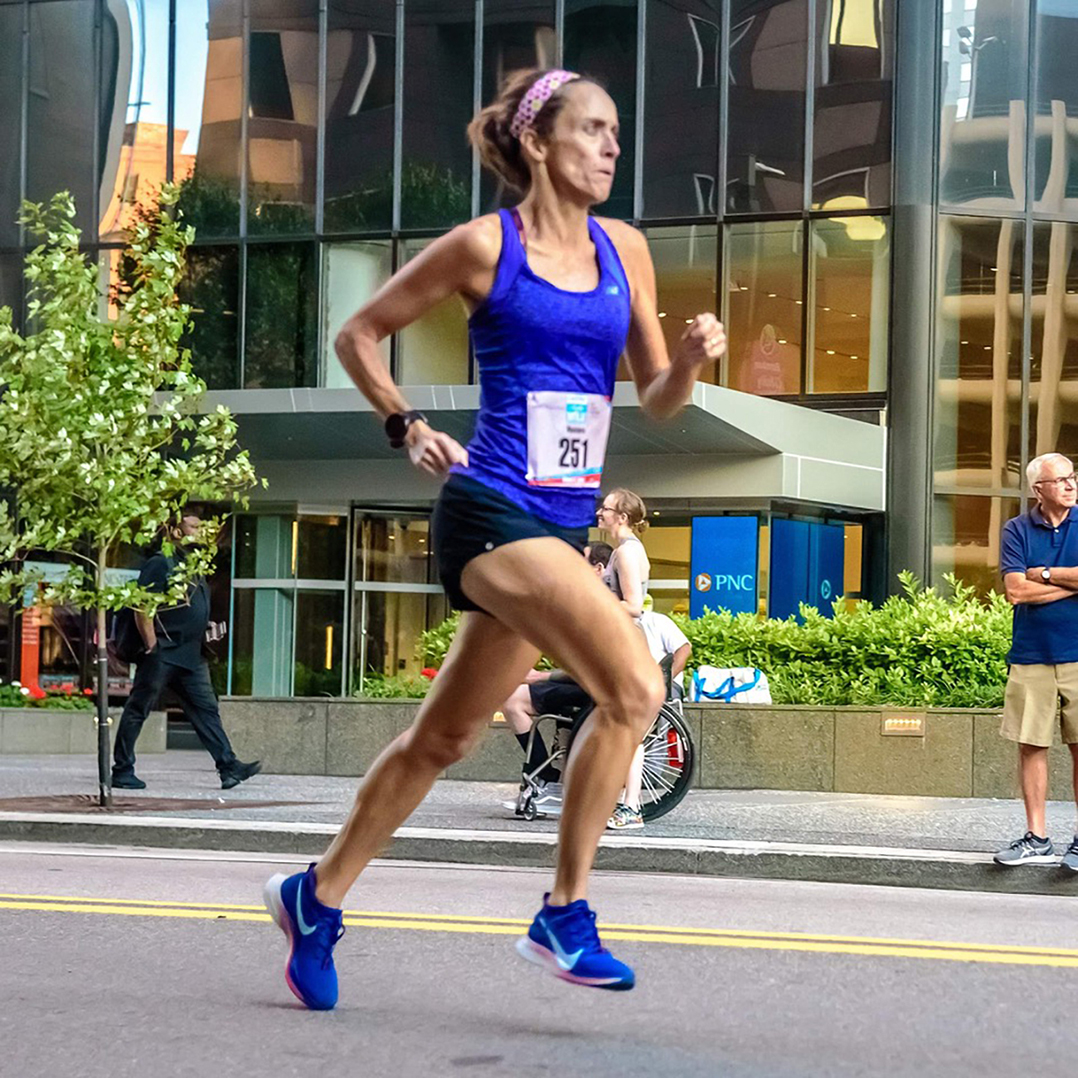 “After a year of no real marathons during the pandemic, and constantly searching for a marathon with a marathon feel to it, I saw Carmel was going forward,” said LaRusso, who lives in Saline, Mich.

LaRusso, 51, was optimistic the Carmel race would be held because race director Todd Oliver was able to successfully hold the Indianapolis Women’s Half Marathon in September 2020.

“I expect a very fast competitive field on a really nice course,” LaRusso said. “Runners are eager to race and share the miles together. Throughout the pandemic, I’ve had one constant. I ran and continue to run with my group, the Goalmakers, every Sunday. It was the only way to stay motivated when you had no races to train for and the roads were quiet.”

In 2020, LaRusso ran half marathons in Holland, Mich., in September and Perrysburg, Ohio in November, the only races she has ran since the pandemic.

Alyanak won the Carmel Half-Marathon in 2011.

“I enjoyed it that year and always meant to come back and run it again at some point,” Alyanak said. “This year’s race fit perfectly with my schedule and it was just great to have an opportunity to race in person.”

“My time was about 11 minutes off my personal best, but my best was set back in 2008 when I was in my prime,” Alyanak said. “I was pleased with my performance and it was an incredible experience. Since the pandemic, I have mainly just been training. The only races I ran were a 10K and a half marathon back in the fall.”

Westfield resident Lucię Sulewski, the 2015 Carmel Marathon champion, is competing as well. Sulewski, 51, has no expectation of winning since she is running her first race since having heel surgery in May 2020. But being able to run is a win, she said.

“I thank the good Lord I am running and grateful for each and every step forward,” Sulewski said. 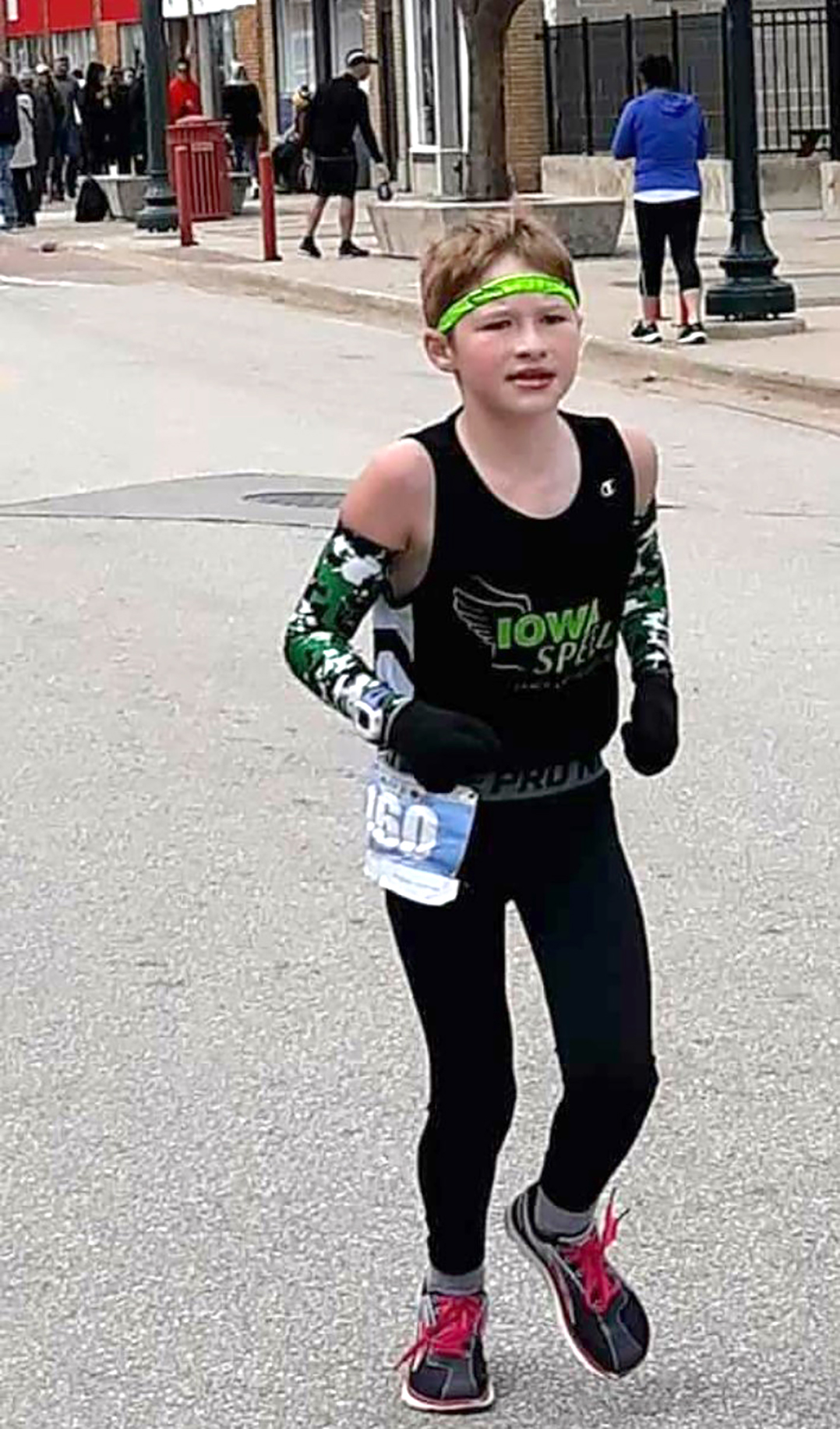 Logan Jones, 14, will compete in his fifth marathon. (Submitted photo)

At age 14, Logan Jones is already a marathon veteran.

Jones, who completed his first marathon at age 11, will be competing in his fifth marathon in Carmel.

“I honestly just like running, it’s relaxing,” Jones said. “I enjoy the scenery changing. You won’t catch me on a treadmill. I enjoy doing something most people won’t do, that’s running long distances.”

A freshman at Liberty High School in North Liberty, Iowa, Jones was running 80 miles a week to prepare for running the Hitchcock, a 50-mile race, in Honey Creek, Iowa, in December 2020. That race was canceled because of the COVID-19 pandemic.

“Since I did the training, I went ahead and ran my 50 miles that weekend,” Jones said. “While not the same as the actual event, it felt great to run the 50 I’d trained for.”

He runs approximately 35 to 40 miles a week to train for the marathon.

“I just did my last long training run (March 14), 21 miles in 2:27, so I feel good going into Carmel in a few weeks,” he said. “I started mixing in some spin classes a few times a week and that has been a great benefit.”

Jones said he has met several interesting people through running.

“During a marathon in Iowa two years ago, I ran the whole thing with a runner from Hawaii of all places. He was crossing Iowa off his marathon in every state list,” he said. “Another person I run with when I can is Mike Price. They like to call me mini-Mike. We like to talk when running. We’ll wear tank tops and shorts in the cold, doesn’t matter.”

Jones took part in a 100-mile March challenge to support Price’s son, Charlie, and raise awareness about being a bone marrow donor. Charlie, 5, had a successful bone marrow transplant in May 2020.

“His son has fought that beast the last year and is doing very well, which we are all happy about,” Jones said. “Things like this is why I run. Runners help runners. It’s a family-like atmosphere.”

Where: Start/finish line at the Palladium at the Center for Performing Arts, 355 City Center Dr.