There was nothing Elias Smith loved more than spending time with his family.

So, when spring break rolled around for the assistant principal at a public school in Brooklyn, N.Y., he was eager to spend it in his hometown of Carmel to celebrate his father’s birthday. 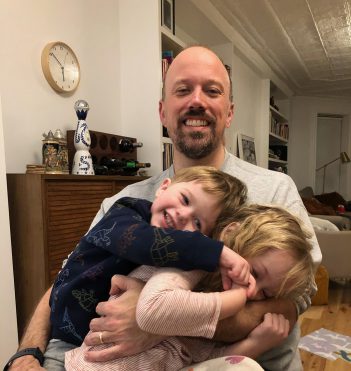 The trip turned tragic on March 27 when Smith, 40, died after being struck by a falling tree in the backyard of his parents’ home in Carmel’s Northwood Hills neighborhood. He and his brother were outside as a storm quickly rolled in that night and were attempting to take cover inside the house on Westwood Drive when the tree came crashing down.

Smith, better known as “Eli,” leaves behind his wife, Lindsey, and daughter, Evie, 5, and Beau, 3.

His brother-in-law, Carmel resident Steve Wagner, described Smith as “a very gentle soul” who showed compassion and care to all, but especially for his tight-knit family.

“I’ve loved watching him being such a devoted dad,” Wagner said. “He was just a family guy through and through, not only to his immediate family, but he showed so much concern for his parents as they are getting older. Whenever he would come to town, the first thing he would want to do is help his parents.”

Smith grew up in Carmel and graduated from Carmel High School in 1998. He earned an undergraduate degree in economics from Washington University in St. Louis and a master’s degree from Pace University in New York City. He worked as a math teacher before becoming assistant principal in 2014 at the Math & Science Exploratory School in Brooklyn.

Wagner said Smith’s family has received an outpouring of support from friends in Carmel and Brooklyn since the tragedy. A GoFundMe account established March 28 to support Smith’s wife and children had raised more than $75,000 in less than 24 hours.

Wagner said Smith’s parents, whose home was badly damaged in the storm and was still without power on March 29, are grateful for the support, from the “professional but very compassionate” response from Carmel police officers and firefighters to those who have reached out to offer assistance.

“It’s the kind of community you want to live in, when people like that step forward to help,” Wagner said. “Digging out from the tragedy is just the first step. Eli’s wife and kids are going to have to carry on without him, and they’re going to need a lot of help.”