The Employer Support of the Guard & Reserve through the Dept. of Defense recently recognized Hamilton County Surveyor Kenton Ward with its Seven Seals Award. ESGR is the lead U.S. Defense Dept. program promoting cooperation and understanding between civilian employers and their National Guard and Reserve employees. 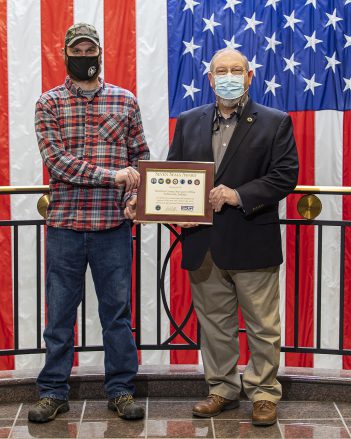 Ward was nominated for the award by Sgt. First Class Scott Dykes, a section corner technician in the surveyor’s office and a member of the Army National Guard. Dykes recently returned from a nine-month deployment to Kuwait.

“Kent did more than just hold a job for me while I was gone,” Dykes stated. “The entire surveyor’s office was really supportive, even sending a couple of care packages while I was gone. Mine was the first deployment out of their office and they went above and beyond in terms of support.”

The Seven Seals Award is presented in recognition of significant individual or organizational achievement, initiative or support that promotes and supports the ESGR mission to include the efforts of the more than 4,500 volunteers who carry out ESGR’s mission.

“I like to hire veterans like Scott whenever I can,” Ward stated. “They know the chain of command, have a good work ethic and demonstrate initiative. Scott is a quick study and has been an excellent asset to our team.”

ESGR develops and promotes supportive work environments for service members in the Reserve Components through outreach, recognition and educational opportunities that increase awareness of applicable laws and resolves employer conflicts between the service members and their employers.