You are at:Home»Current in Carmel»Carmel Community»Carmel historian uncovers discovery date of Flowing Well on 116th St.

There has been much speculation through the years about the discovery date of Carmel’s Flowing Well on E. 116th St.

Carmel Clay Historical Society historian Andrew Wright seems to have solved the mystery, just in time for the landmark’s 117th anniversary, while researching the natural gas boom in Carmel. 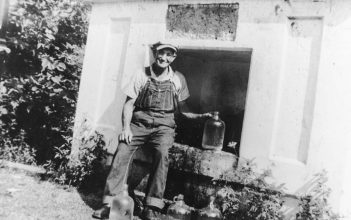 “The well was struck when a gas company drilled a natural gas well on Charles Williamson’s farm, but instead of gas, they struck an artesian well,” Wright said. “The pressure was so strong that the drill rig tilted. The well was right off the road, so Williamson built a boardwalk to make it more accessible and invited the public to use it. This is the kind of event that would have normally made the Noblesville newspapers, but there didn’t seem to be any mention of the well’s discovery.”

“The most compelling claim came from Charles Williamson’s son, Howard,” Wright said. “In 1987, he said the well was struck on his seventh birthday. The date was recorded as March 15, 1906. However, that seemed to be wrong. There was no drilling in Mattsville that year. When we looked into it, we found that his seventh birthday was actually March 15, 1904. A short announcement in the Hamilton County Ledger confirmed that a gas company was drilling on the Williamson property in the winter of 1904. We were excited to have figured out the date in time to recognize the anniversary of the well’s discovery this year.”

Wright said the story of the Flowing Well’s origin will be in a book available later this spring. Wright is writing an article about how the CCHS came by the discovery for its newsletter, which can be found on its website and Facebook page. For more, visit carmelclayhistory.org.

Flowing Well Park, 5100 E. 116th St., is closed for improvements but is expected to reopen in the spring.